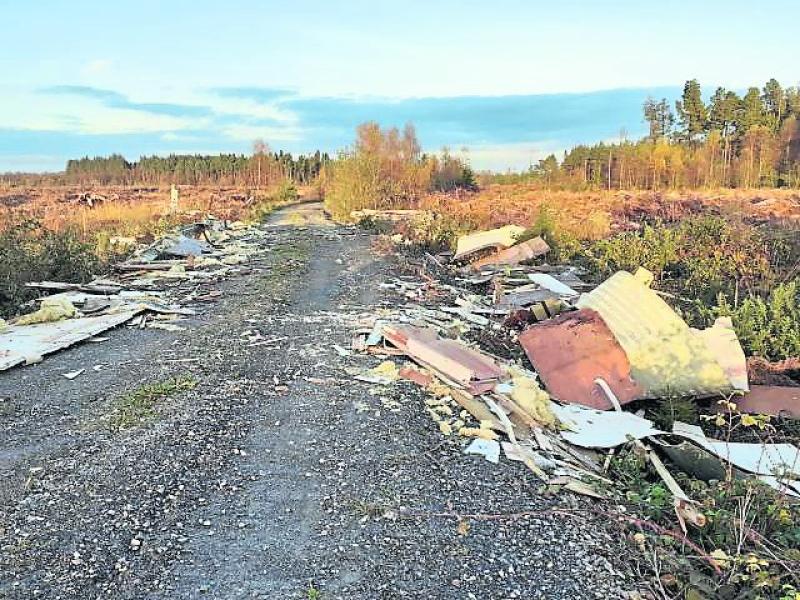 This illegal dumping in Liskeveen, Littleton, was reported on by the Tipperary Star last November

Littering, dumping and waste disposal dominated the agenda at this month’s meeting of Thurles/Templemore Municipal District, with one councillor saying dead dogs had been found dumped in Templemore.

One of the benefits is that they alert the council once they are at 85% capacity, and then emptied. However, in Littleton, some bins are “absolutely bursting at the seams”. “Is there a second roll-out due soon,” asked Cllr Ryan.

Councillor Ryan said there are a number of dumping black spots in the District, such as an area near Derrynaflan at the Ring Fort.

“I think what we should do is target certain areas for anti-dumping. The law now allows us to catch people using CCTV. They are causing a lot of stress for people. Recently I had to pick up nappies off the road.

“There are certain areas where it’s happening all the time.” Cllr Ryan called for a new anti-dumping campaign. “It’s taking up a huge amount of time and resources within the District.”

Councillor Jim Ryan said there’s a serious issue of illegal dumping at the rear of Derrynaflan Drive, and the Council had to go in with lorries to clean it up, “at huge cost to the Council.”

“Since we’ve done that, more dumping has taken place again. Unless we put steel rail fencing around that fort, this time next year, we’ll be sending in more lorries again.” Councillor Ryan said the only solution is to ringfence the area “because this situation is getting worse.

“There are about 20 houses in that estate and they are sick to the teeth of it.” There are fires being burnt, and “dogs going all over the place”. “You need to take concrete action, and put up a railing.”
Director of Services Marion O’Neill said they are looking to include the whole of Derrynaflan in a new anti-dumping initiative.

Some €80,000 has been granted for anti-dumping from the central Government. Ms O’Neill said it could be difficult to place mobile CCTV in urban areas as it could infringe on private residences.

Responding to Councillor Peggy Ryan’s call for a ‘hardship fund’ to be set up for households unable to pay for refuse disposal, Ms O’Neill said there is a special program to facilitate households sharing bins.
“Dead dogs” in Templemore estate

Councillor Eddie Moran said Carden Court in Templemore, near the Clonmore Road, has “bails of hay and straw” strewn near houses. The estate has not been taken in charge yet. “Every kind of rubbish is thrown into a corner there, and it’s causing fierce hassle to residents in that whole new end.” “Dead dogs” had been thrown in the area.

Councillor Moran called for Sunday cleanings to resume, and at Bank Holiday weekends.
Councillor Shane Lee said he had representations from the same area. “To say that the sight is unsightly is an understatement.

“It’s absolutely appalling to think that you could drive into a housing estate and you see the rubbish, round bales of hay and straw just left idly lying on green areas, and the amount of rubbish around the estate.

“It needs to be dealt with because it’s very unfair on other residents who are living in that estate.”
Cllr Lee also drew attention to a burnt out car in Kennedy Park in Roscrea.

Councillor Seamus Hanafin said Thurles used to have litter sweeping on a Sunday morning, and “we really need to go back to it.”

Marion O’Neill said it is their intention to recommence physical visits to houses to see how householders are disposing of their waste legally.