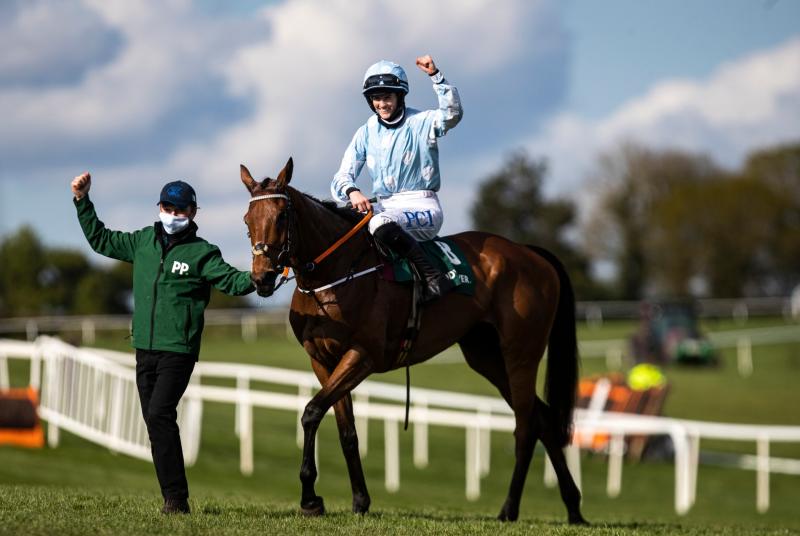 Punchestown Racecourse will feel like the centre of the sporting universe on Friday as golden girl Honeysuckle has been declared for her defence of the Paddy Power Champion Hurdle.

The eight-year-old mare has become a household name over the last number of years thanks to Henry de Bromhead’s masterful training and the alliance formed with RTÉ Sports Star of the Year and BBC World Sport Star of the Year, Rachael Blackmore.

Honeysuckle’s two Champion Hurdles at Cheltenham and her Punchestown Festival success in the Paddy Power Champion Hurdle last season are three of the major races included in her 16-race winning streak, which began with a point-to-point triumph and has continued with 15 victories under rules on the racecourse. That unbeaten sequence from debut is a jump racing record.

The bid to extend that record in front of packed Punchestown grandstands, aptly on Ladies’ Day, will see Honeysuckle and Blackmore take on five rivals in the Day 4 showpiece.

The 160-rated Teahupoo (Robbie Power) progressed through the ranks with three wins this season before finishing 10th in the Champion Hurdle at Cheltenham but represents Gordon Elliott who will be on the crest of a wave after his opening day exploits at Punchestown.

The JP McManus-owned pair of Darasso (Joseph O’Brien/Luke Dempsey) and Saint Roi (Willie Mullins/Mark Walsh) also line up. The former was a good winner at Fairyhouse earlier this month, while Saint Roi ran a fine race to be fourth to Honeysuckle at Cheltenham. Saint Roi’s trainer Willie Mullins is also represented by Echoes In Rain (Paul Townend).

Frank Berry, racing manager to JP McManus and former champion jockey is under no illusions about the daunting task facing Darasso and Saint Roi in trying to lower the colours of Honeysuckle.
“Darasso is a class horse,” Berry said. "He won well at Fairyhouse and is probably up against it against the mare but he goes there in good form, in winning form, and he won’t mind the ground so we’re hoping for a good run.
“He’s very consistent and is a great horse to have. He’ll rarely let you down.
“Saint Roi ran very well in the Champion Hurdle. He was no match for the mare but if he turns up in the same form and we get place money, we’ll be happy.”
Berry hailed Honeysuckle as a true champion.

“She’s a fantastic mare,” he added. “She turns up every day in Grade 1s and does the business. You could only say good things about her. She’s just fantastic. She’s beaten everything that’s been put in front of her and you can’t ask for any more.”

David Pipe is no stranger to Punchestown and he will look for his biggest ever winner at the meeting with Adagio who is the mount of Tom Scudamore and takes his chance after finishing eighth in the Champion Hurdle at Cheltenham.
Of course, for owner Kenny Alexander and his representative Peter Molony, the Honeysuckle dream began at Punchestown when the mare was purchased at the Goffs Sale at the 2018 Festival.

Speaking earlier this week, de Bromhead said: “Honeysuckle is in mighty form since Cheltenham. She seems really well. She had to battle to win at Punchestown race last year but they went some pace in it and I think she did what she had to do and was good on the day.

“I think it’s fair comment to say she only does what she needs to in order to win her races and that probably has helped her keep reproducing so consistently throughout her career.

“It’s a privilege for all of us to be associated with her. She has been incredible since being bought by Peter Molony and Kenny Alexander at Punchestown and we can’t wait to go again on Saturday.”
The Alanna Homes Champion Novice Hurdle presents the other Grade 1 action on Friday’s card with six due to line up and face the starter for that €125,000 race.

Gordon Elliott, who snared the opening Grade 1 contest of the week on Tuesday, is represented by the Aintree Grade 1 winner Three Stripe Life.

Willie Mullins continues his trend of being well represented in the Grade 1 races this week with three runners here, as Deploy The Getaway (Sean O’Keeffe), Kilcruit (Patrick Mullins) and County Hurdle winner State Man (Paul Townend) all look to end their novice campaigns with top honours.
Renowned point-to-point producer Pat Doyle has done well with a rare foray on the racecourse and Flame Bearer has most certainly done him proud this year with Doyle hoping the icing can be put on the cake on Friday.

The seven-year-old actually ran in his point-to-point for Donnchadh Doyle before joining that noted trainer's unrelated namesake and since then he has recorded five wins in seven starts.
Doyle, who has had Grade 1 winners such as Bob Olinger, Appreciate It, Shattered Love and First Lieutenant in his care, is now hoping to saddle his own Grade 1 winner.

“He has progressed nicely right through the season, from his hurdling debut in Cork last December, when he pulled too hard and blew up because we’d no gallop done with him due to the ground being so quick," said Doyle.

“He has learned to settle far better now and was a bit unlucky in Naas before winning at Fairyhouse and then the two Grade 2s at Naas and Fairyhouse again.
“He showed a good attitude the last day after getting stuck in a pocket to get up and I couldn’t be happier with him. He’s in great order.

“The point-to-points are our bread and butter but it’s powerful to have a horse with good chance in a Grade 1 at the Punchestown Festival, especially with (son) Jack riding and we’re looking forward to it.”
The hat-trick seeking Highland Charge completes the field for Noel Meade and Sean Flanagan.