Get your tickets now! 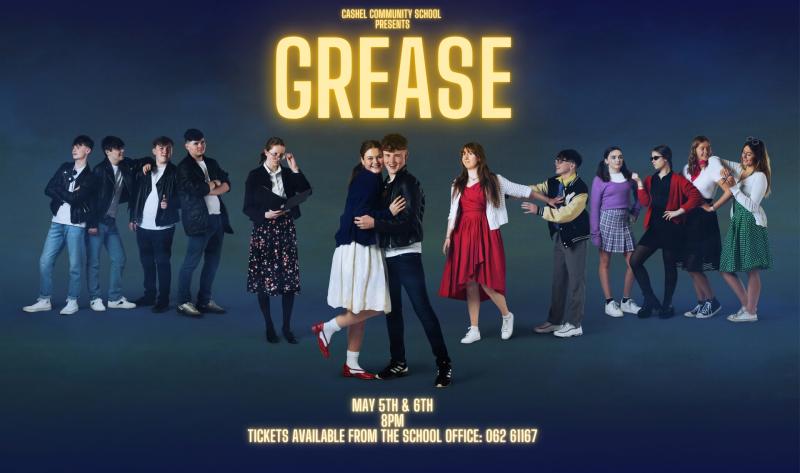 Cashel Community School is delighted to open its doors once more for its annual musical. This year’s production is Grease. It will take place on Thursday and Friday May 5th & 6th.

The cast are looking forward to showcasing their many talents. Grease is a class reunion flashback to the "days that were" in the fabulous fifties.

Miss Lynch (Caoimhe Healy) , still the old-maid English teacher, and the high achievers of the class, Patty Simcox (Jacqueline Carew Molloy) and Eugene Florcyk (Darren Ryan), are presiding at the head table once again, but the T- Birds (Bobby Coleman, Dylan O’Gorman Ryan, Cian Ahern & Ross Walsh) and all the gang are back in the '50's reliving their hell-raising days at Rydell High.

Kenickie, Roger, Doody, Sonny, and the group are pressing Danny (Oisin O’ Dwyer) about his "hot" summer. Concealing the fact that he met a girl he really cared about and didn't score at all, he leads them on.

When Rizzo forces a confrontation, Danny plays the "big deal" for his peers rather than show the tenderness he shared with Sandy last summer. Sandy is confused and hurt by his strange behaviour.

At a pyjama party Sandy tries to get into the groove with the other Pink Ladies but gets sick. Rizzo mocks Sandy and splits to join the boys.

Sandy, still puzzled about Danny, becomes a cheerleader. Danny longs for Sandy but doesn't know how to approach her. It's time for the school dance, a special event to be hosted by Vince Fontaine (Conor Hassett), the nationally known D.J. The Hand Jive Band is led by Jake Whybrow.

There is a dance contest won by Danny and Cha-Cha (Silvia Lotesoriere), an obviously loose lady who seems to drive the final wedge between Danny and Sandy. Frenchy becomes a beauty-school dropout, encounters her teen angel (Aoife Browne Corbett), and then flunks out. On second thought, she turns to the girls for help and becomes a greaser's dream girl. Danny is knocked out.Everyone is back together to rock 'n' roll happily ever after.

The production is directed by Mr. John Murray with musical director Ms. Liane Bradley and producer Ms. Nicola Sheils and choreographed by Ms. Miriam Ball & Ms. Lauren Maguie. We look forward to welcoming you on what is sure to be yet another excellent production.