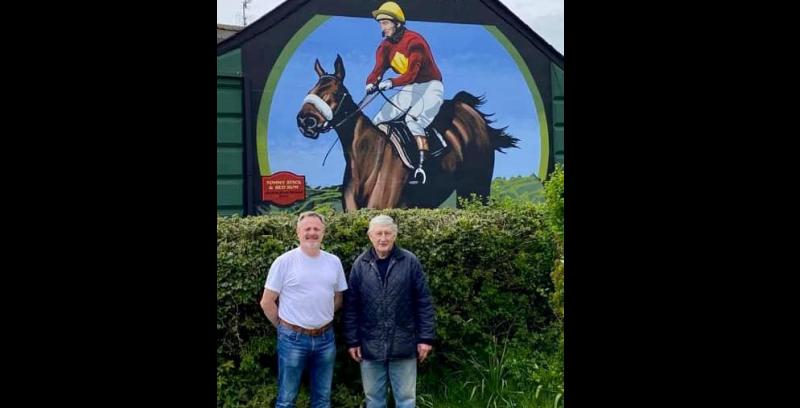 Neil O’Dwyer from just outside Tipperary Town is an artist with many years’ experience who has worked on all types of murals and paintings.

Neil was in Thomastown, Tipperary, recently, to repaint a mural of Tommy Stack and Red Rum that he originally painted 26 years ago on the gable wall of Sir Rowlands Bar.

Red Rum won three Aintree Grand Nationals in 1973, 1974 and 1977 and Tommy Stack was on board for the 1977 National when Red Rum was 12 years of age and generally considered to be too old to win the race for a third time.

However, being ridden by Tommy for a second consecutive National, the gelding clinched his unprecedented third title, bringing his career earnings to a then steeplechasing record of £114,000.

Tommy got his first trainer’s licence in 1986 and trained at Thomastown, Golden. In 1994 he trained Las Meninas to win the 1000 Guineas. His other major winners include Tarascon (Irish 1000 Guineas) and Kostroma (Beverly D Stakes).

Neil O’Dwyer and Tommy Stack renewed acquaintances once again after Neil had completed a repainting of the mural that he first did on the wall of Sir Rowlands Bar 26 years earlier in 1996.

The iconic mural which is seen by thousands of commuters as they travel on the N74 Golden - Tipperary Road, depicts Tommy and Red Rum in full flight in the 1977 Aintree Grand National. Written by Martin Quinn