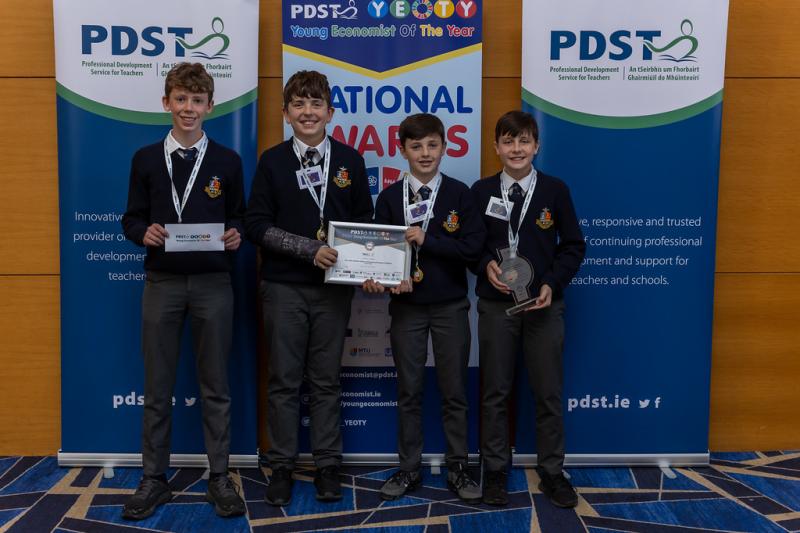 On April 28 four Rockwell students won the top First Year Award in the Young Economist of the Year Award. The ceremony was held in the O’Reilly Hall in UCD.

There was huge excitement when their names were called out confirming that they had beaten 84 other projects nationwide.

Reviewing the projects the judges commented that “these young men showed maturity beyond their years by completing a comprehensive cost-benefit analysis of all of the clean energy alternatives available to Rockwell.

They were happy to use the lake for air to water as well as HEP, the land for wind and the roof for UV energy. They showed great imagination. Rockwell is lucky to have such students”.

The students (pictured above) George O’Callaghan (pictured left) from Cloneen, Roan Hally of Springmount, Gilles Kearney from Clonmel and Matthew McElroy, Colman, set about their project by surveying the stakeholders; the student body, parents, and past pupils about their ideas for providing for the vast energy requirements of running such a traditional building as Rockwell.

They then costed each method. They concluded that HEP might be most useful. Indeed the students have made arrangements with college President Fr Jack Meade as they wish to push forward with their plans.

Their teacher Pat Egan paid tribute to the hard work and enthusiasm shown by the students who sacrificed so much to complete the project to the standard that they did.