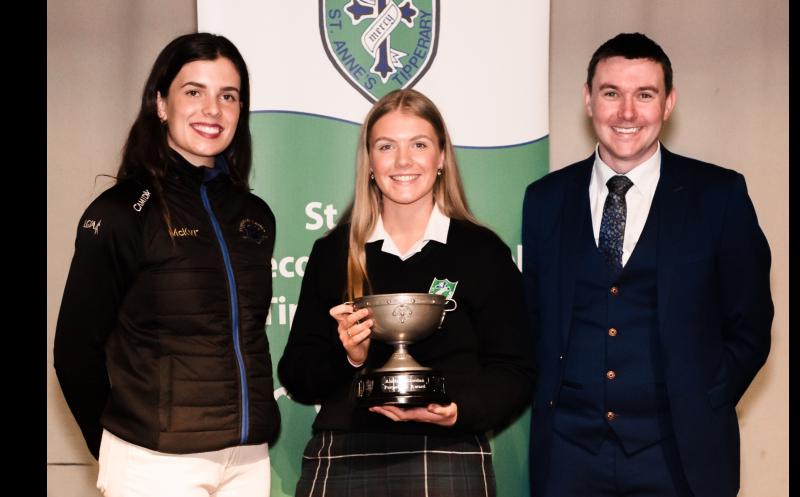 It was with great delight, anticipation and celebration that the students and staff of St Anne’s Secondary School returned to The Excel Theatre to celebrate their annual award ceremony.
For the past two years the award ceremony was successfully held online. However, in the words of school principal, John Cullinane, “it was wonderful to bring the whole school community together - staff, students and parents - to acknowledge and celebrate the exceptional efforts and achievements in our school this year”.
MC on this special occasion was art teacher, Ms Mairéad Hayes. Mairéad said: “We acknowledge that everybody has their own skills, gifts and talents and that everybody has their own hill to climb.”
She acknowledged that “every student present was worthy of recognition in so many ways, however, it is not possible to acknowledge everybody”.
Therefore, every student and staff member in the school were given the opportunity to vote for who they thought was most deserving of awards.
Mairéad said “it was a pleasure to read the complimentary comments students wrote about each other, and the high praise that teachers gave to their students”.
Tipperary senior ladies football player, Anna Rose Kennedy, was present on the day to present the awards.
She is a wonderful role model for those younger than her and spoke eloquently to those gathered about always striving to achieve your best.
Awards were divided into senior and junior divisions. The categories in both divisions included academic, creativity, sports, leadership, spirit of St Anne’s, positivity, and community.
There were also two extra awards at senior level, The CEIST Award and the Aisling Riordan Award.
The Junior Academic Award was presented to Sara Crosse, as a student who consistently achieves high grades in her academic work.
There were three winners of the Junior Leadership Award, and they were Millie Kelly, Molly Crowe and Sophia O’Grady.
The Junior Creativity Award was presented to two students, Emma Donnelly and Hannah Mai Sheehan.
There were two winners of the Junior Sports Award also. Leah McGrath won a sports award, as she represents Ireland on the U15 soccer squad this year and has also been very active on many schools teams.
Orla Ryan also won a sports award to recognise her outstanding achievements in boxing this year. Orla has won two national boxing titles in this school year.
She won her first title in December and her second in May – a phenomenal achievement.
Winner of the Junior Positivity Award was Áine Kinane, who always has a great attitude and a smile on her face.
The Spirit of St Anne’s Award is for a student who represents the values that are highly cherished in St Anne’s.
This year’s winners are all kind and gentle by nature, always supportive of their peers and considerate of others.
The junior winners of the Spirit of St Anne’s Award were Eabha Burns, Anna English and Eva Donovan.
A special junior award was presented this year to Chloe Pons, in recognition of her excellent integration into life in St Anne’s since she came to the school from Spain in January 2022, and the manner in which she helps other new students from Spain who come to study in St Anne’s. She has a positive attitude and a great sense of humour.
The senior academic awards were presented to Leah Carew, ÁibhÍn Kivlehan and Nia Donovan.
These girls are all dedicated and diligent workers, who consistently achieve high grades in their schoolwork. The winner of the senior creativity award was Kyra Duggan. Kyra is an exceptionally skilled artist. Her imagination and creative skill are evident throughout her school life. Three additional creativity awards were presented to Emilija Mezele, Lin Zhi Keenan and Sonia A Ciobica, to recognise their creativity in the national Junk Kouture competition as well as the CEIST Art Calendar Competition 2022.
The senior sports award was presented to Aoife Flynn, who is currently the captain of the Tipperary minor ladies football team, who contested the Munster A Final against Cork.
She is also a key member of the senior school’s team that won the Rachel Kenneally cup this year.
However, this year the school has many exceptional senior sports people who also deserve to be acknowledged for their extraordinary sporting achievements.
Grace Fitzgerald received a sports award for her exceptional athletic achievements this year.
In February Grace set a new U19 Munster indoor triple jump record. Recently, she won the senior triple jump and set a new Munster schools championship record as well as taking the silver in the senior long jump event.
Grace will now go on to represent St Anne’s in the All-Ireland schools track and field championships in June.
Ciara O’Hora was presented with a sports award for her achievements as captain of the victorious U16 Tipperary ladies football team that beat Clare in the Munster final in May.
Ciara has been hugely involved in school, club and county football for several years. Sarah Ryan was also presented with a sports award for her exceptional football skills.
Sarah was recently called up to the Tipperary senior ladies football panel, a huge achievement indeed. Her performances for the school, club and county at underage have been at a consistently high level over many years.
Ellie Hadnett was presented with the senior leadership award.
For many years Elle has been an active member of the student council and a natural leader amongst her peers.
The senior spirit of St Anne’s awards were presented to Lauren O’Dwyer and Katie Bourke.
AMBASSADORS
Both girls were described as excellent ambassadors for St Anne’s, with friendly, kind and gentle demeanours, and helpful manners.
The senior positivity awards were presented to Meabh Ryan and Rachel Murphy. Both girls were described as having “a get on with it attitude”, as being very sincere, unassuming, and helpful to others. 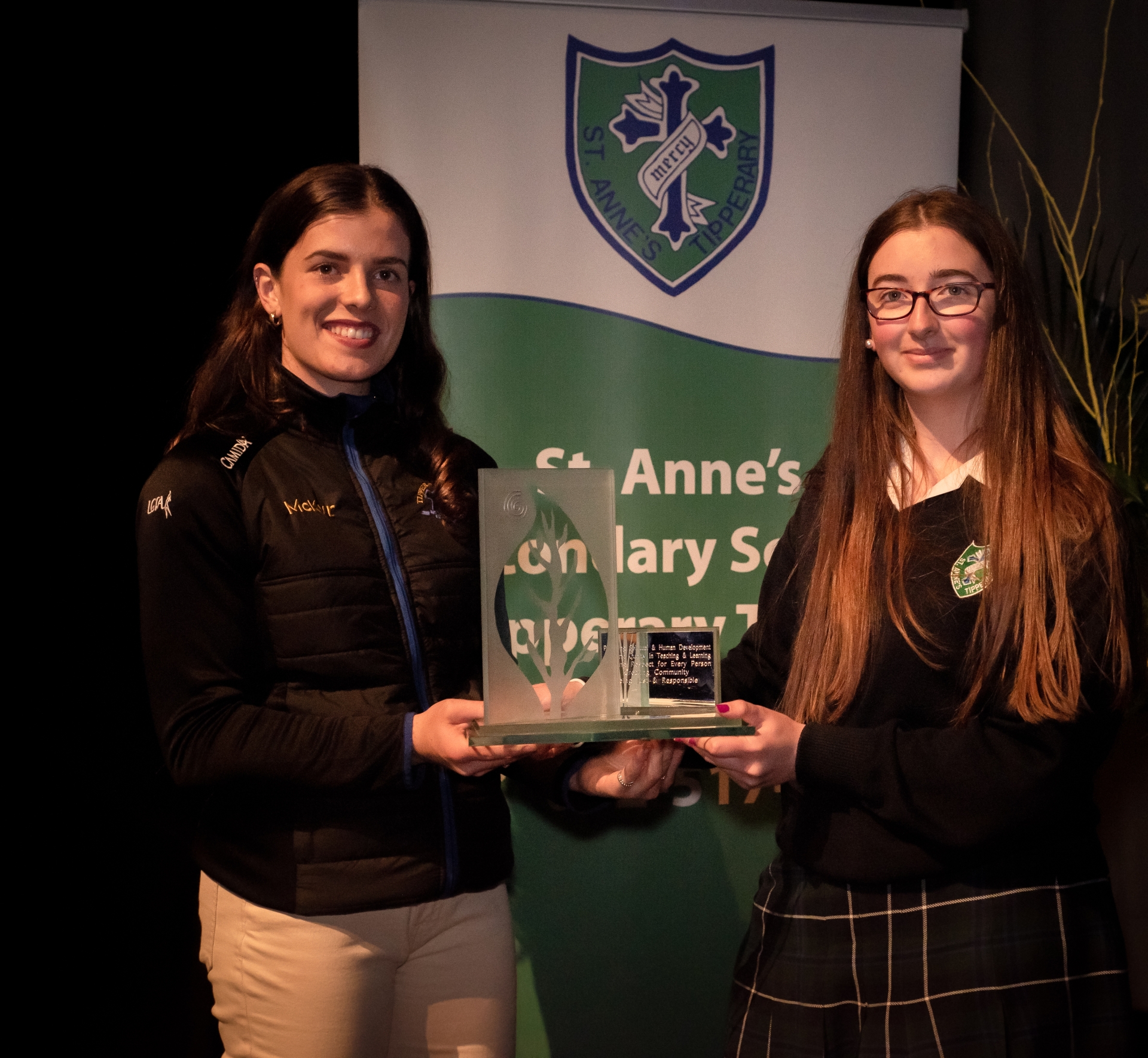 Eleanor McCahill was presented with the senior community award, for her involvement in many school and community organisations.
Eleanor is a long-standing member of St Anne’s student council and has attended Irish second level student union events.
She has also been involved in the CJ Kickham Brass Band and Tipperary Town Athletics Club and has volunteered as a reader at St Michael’s Church, Tipperary.

The CEIST Award has been sponsored by school trustees, CEIST, to recognise students who represent the values of CEIST and The Sisters of Mercy.
The winner of the CEIST Award for 2022 was Ailish Finnan.
She is kind, caring, considerate of others, hardworking, committed and always strives to do her best – a true representation of all that the Sisters of Mercy and CEIST hold dear.
Finally, the Aisling Reardon Award is for the student who stands out above all others, the “student of the year”.
This year the award was presented to Ciara Ryan. Ciara represents every aspect of a St Anne’s student. She is an excellent role model for her peers and for younger students, with her excellent work ethic, positive attitude, and caring demeanour. She leads by example in relation to her commitment to her studies, her prowess on the sporting field and her warm, caring, helpful demeanour. 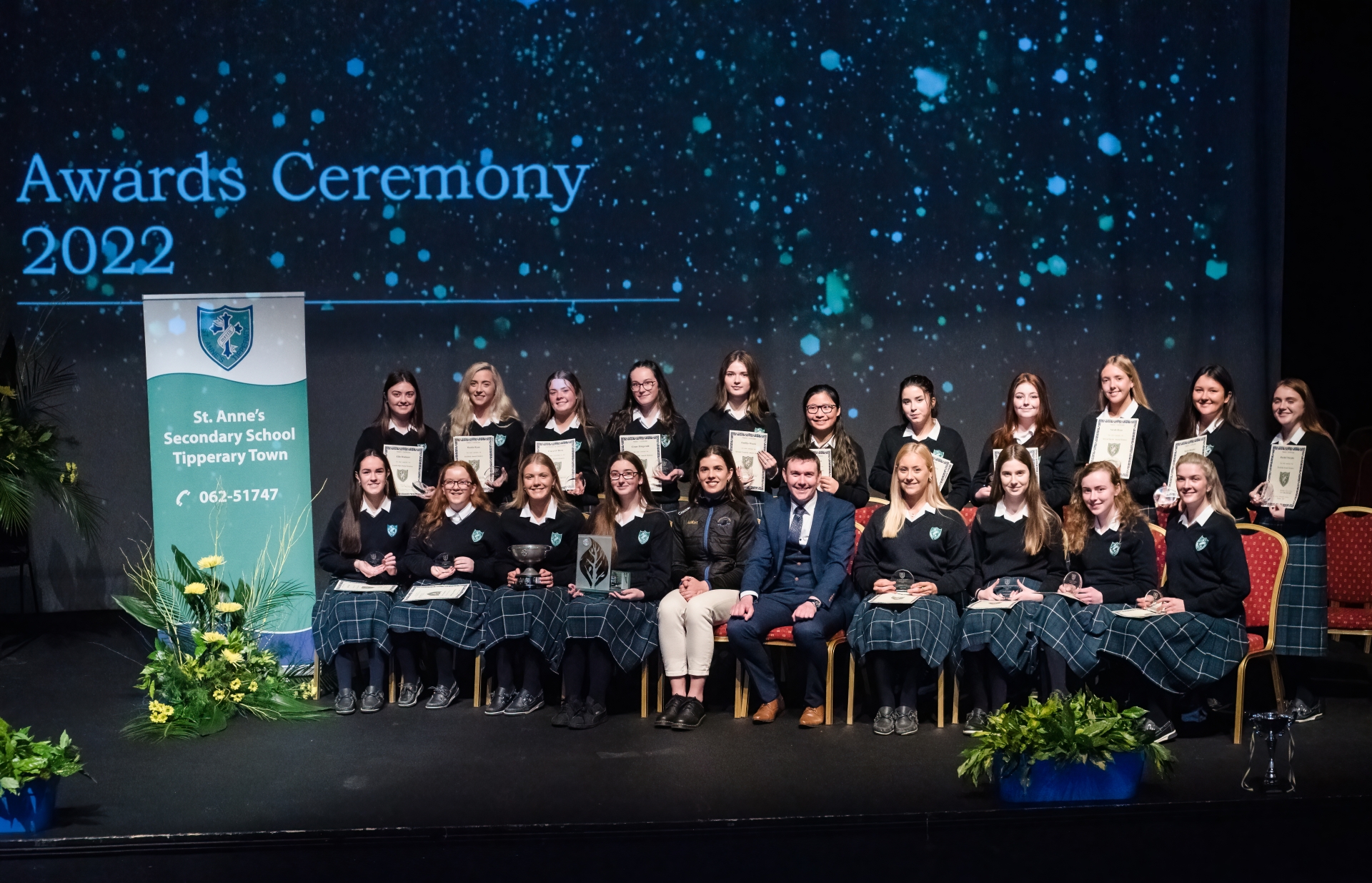 She even played a leading role in the school musical. She gives every task 100% and has an impeccable ability to balance work, rest and play.
At the award ceremony, medals were also presented to successful sports teams who won competitions over the past three years, as medals were unable to be presented prior to this due to Covid-19 restrictions.
It was a huge honour for the school community to have Denis Kenneally present at the ceremony to present the Rachel Kenneally Cup to the senior football team who won the county senior B Final this year.

Rachel Kenneally
St Anne’s were particularly pleased to win this cup, which commemorates past pupil and county footballer, Rachel Kenneally.
Also presented with medals was the junior football team which won the Junior Munster Plate in 2020.
The U16 ½ camogie team who won the Munster final in 2020 also received their medals, as did the Mixed U19 /U16 basketball team who won the Tipperary Knights Blitz this year.
Well done to all involved on a very successful celebration.