Epic: Once in a lifetime trek for Paschal Ryan and friends 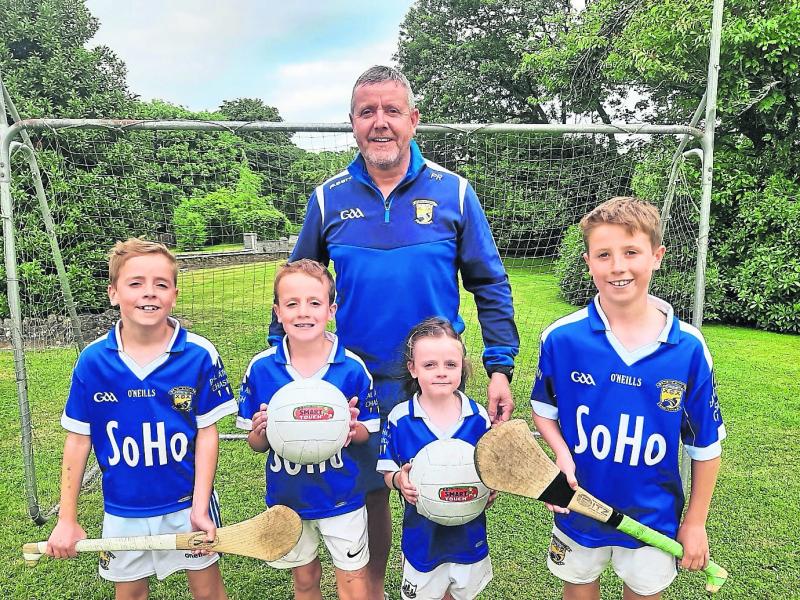 Paschal Ryan, (centre), with junior members of Ballinhassig GAA club, gearing up for their 140k walk fundraiser. Inset is the walking route from Cork to Tipperary

A GAA fan hoping to raise funds for his club is embarking on a once-in-a-lifetime fundraising walk from Ballinhassig in Cork to Moyne Templetuohy in Tipperary culminating in a grand finale at Hayes Hotel in Thurles and Moyne Templetuohy GAA club.

Paschal Ryan, originally from Moyne, now living in Ballinhassig, chairs a committee set up to fundraise for a new GAA Clubhouse. Paschal told the Tipperary Star that he always had it in his mind that it would be a fantastic achievement to walk from Cork to Tipperary.

“I said we need to do something different and think outside the box,” said Paschal. The fundraiser event starts on August 28, running to September 3.

A group of club members will walk the distance of about 170kms over six days, visiting a series of GAA clubs on route each evening where they will play a juvenile blitz plus interview the oldest member of their club for video.

Clubs that are collaborating include Sarsfields and Bride Rovers in Cork, Glanworth in Tipperary, Ballylanders in Limerick, Cahir GAA Club and Cashel King Cormacs GAA club.
“We’re following the old Cork to Dublin road over the week,” says Paschal. “On Saturday, September 3, we hope to visit Semple Stadium and Hayes hotel for photos and interviews on route to Moyne Templetuohy.”

Red FM and local radio stations will follow their progress.

“I’ve been collaborating with clubs along the route since January and we’re getting fantastic interest in this even.”
The launch will take place on July 31 in Ballinhassig village, with a community evening of fun, music and dance. Walkers will then leave Ballinhassig on August 28 to Sarsfields in Glanmire. Some participants will camp out each night, completing legs of between 25 and 35kms each day.
“We’d love to have a bit of fanfare at Hayes Hotel in Liberty Square on Sept 3 in honour of the great GAA organisation. We will then walk out to Moyne Templetuohy GAA club, where we are going to organise an U16 ladies football game.

“We take three players from each club we visit, and they will form the underdogs team playing against the Tipperary U16 Ladies Footballers.”

Paschal says the underdogs team will wear specially commissioned Ballinhassig ‘Trip to Tipp’ commemorative jerseys with the crests of each club they’ve visited printed on.
“Hopefully we will have loads of Moyne Templetuohy support helping to parade us in for the last leg of the fundraiser.”

The event is supported by Jacqui Hurley, Rob Heffernan, Red FM, Gym+Coffee, Clubber.ie plus many other GAA stars past and present.
Donations can be made to a gofundme page which will be set up closer to the event, while Red FM are the official sponsors.