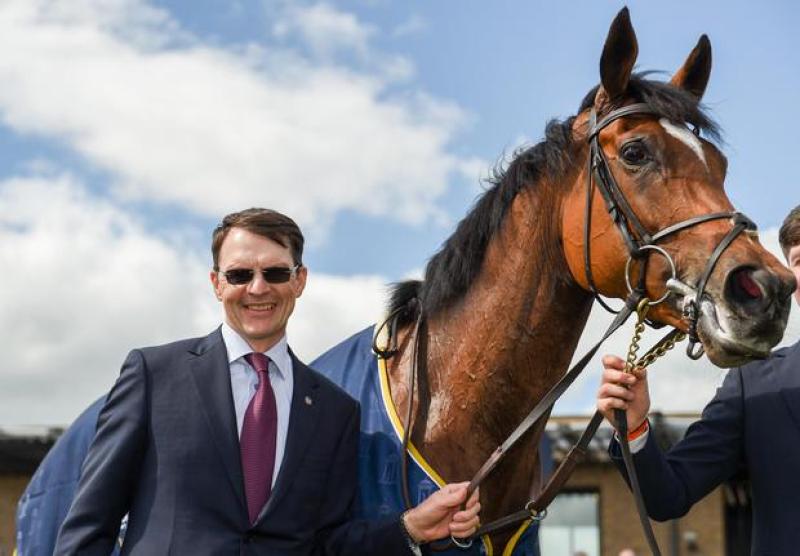 BetVictor: Well in the Norfolk on the Thursday, we're kicking off with The Antarctic who's been a horse that's been subject to plenty of talk throughout the season so far.

Aidan: yeah, very happy with him we always have been. Obviously he's a brother to Battaash very quick horse. He doesn't really realize how quick he is yet because we haven’t wound him up and because obviously that type of horse when you wind them up, it's very hard to get the lid back on them.

Obviously we've done more farm for this race than the other two. So, he started to wake up and this will be the first time we will take the lid off. We think he’s very quick, we think this type of race will suit him and we are looking forward to seeing him run.

BetVictor: You mentioned trying to keep the allure on him. obviously, that run Thursday at Tipperary just got up and he did look a little bit green, didn't he? even in the second run I thought to myself he still is that where you just tried not to do too much with him

Aidan: yeah absolutely, we are training him physically but were not disturbing him mentally. For those big Sprint races you have to really get very sharp but we didn't want to sharpen him up mentally because obviously it's very early in the season to be doing that and obviously he's a brother to battaash. Battaash had a lot of natural speed, nervous energy and as he got older became very hard to contain that. These horses are quick minded. He's obviously the first two runs were kind of floating them and teaching him without making them anxious. Hopefully he'll be a little bit more up for it this time and we're really looking forward to seeing what's going to happen.

BetVictor: Is he the type of horse where you’re going to have to think a little bit more carefully potentially about the atmosphere of a Royal Ascot because that’s something he’s not going to be anywhere near experienced enough in his previous runs.

Aidan: yeah, I think he should be fine that way because he's been well conditioned for that mentally. His two runs up to now have been with that in mind so that should be fine. So hopefully we get to improvement that we think might appear and we hope after it that he's able to keep it together, but naturally very very quick horse.

Aidan O’Brien: She’s won twice this year, one first time at The Curragh, won very impressively, looked very exciting filly that day, and then she went and won a group filly race over six. She’s very off handed, relaxed, good move and good minded filly. So, we are looking forward to her. She seems to have come forward again since Nath, she’s really matured and could turn into a proper classic filly. We are looking forward to her run, it is a tough competitive race, but she could be a very nice filly.

Aidan O’Brien: Cadamosto we are not sure about the six furlongs. He’s improved a lot since his last run, but he could be a dark horse and we think blinkers are going to step him up and if he doesn’t run against the older horses in the first day he could go there. Any ease in the ground he wont mind but seems to be in good form.

Aidan O’Brien: The new market race didn’t go well for her. She just got trapped in a pocket the first half and she was over racing, and it fell to bits on her. We gave her plenty time since, she seems to be in good form. We are not sure about the trip, but we are going to find out. We don’t know whether it was the over racing early or the trip was too far for her, but we are going to learn this time. She’s working well and very good order. She’s going to be very exciting to watch and to see what she does do.