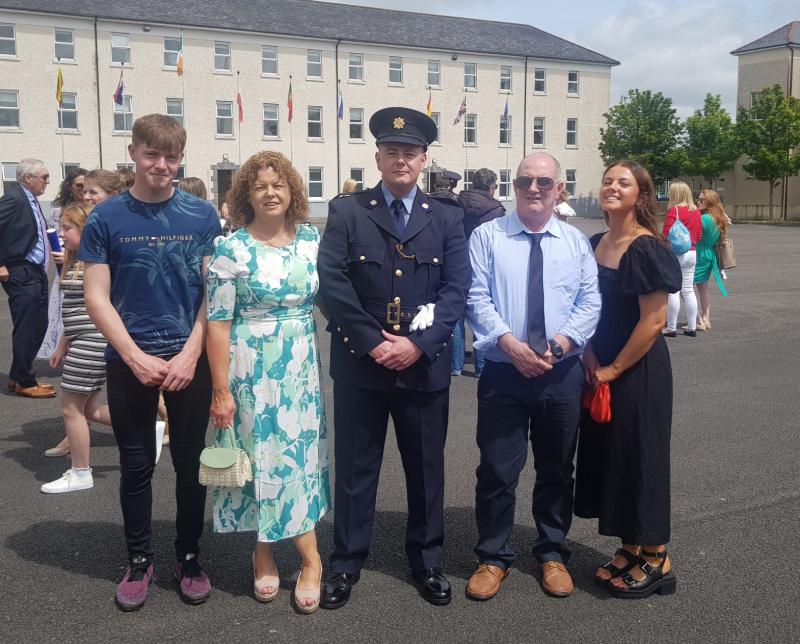 Among the new officers, drawn from a pre-Covid recruitment campaign in 2019, were three Tipperary gardaí: Aoibheann O’Neill, who will be stationed in Henry Street, David Finnane from Bansha, who is going to Waterford, and Yuriy Pivovarov from Roscrea, to be stationed in Longford.

Garda Finnane told the Tipperary Star that he was always inspired by the gardaí, and looked up to them as a child. “I always had a keen interest in serving the community. I always looked up to them and wanted to be a part of that.”

“I always aspired to help people. My granduncle was a Guard as well. He was always talking about it, and the great times he had in Blackrock in Cork.”

Garda Finnane said he’s a “great people person,” and you need the “right mindset” to complete the eight-month course, with 12 weeks training in a Garda Station. There’s a great sense of companionship amongst the class and “we all help each other out.”

Covid delayed their training by two years. “I applied in 2019 and only got the call in November last year,” added Garda Finnane.

This was the fifth attestation this year and the second in public.

The diverse group consisted of:

The total number of sworn Gardaí is currently 14,352.

These 53 members of An Garda Síochána commenced their Garda training in November 2021, having originally applied to become members of An Garda Síochána in the 2018 recruitment campaign.  They have undertaken a blend of on-line learning, on-site learning in the Garda College, and experiential learning in training Garda stations.  These 53 newly sworn Gardaí will now take on operational responsibilities.

Speaking at the Graduation Ceremony in the Garda College Garda Commissioner Drew Harris said: "Each one of our new Gardaí passing out today have made the choice to pursue a career that will make such a considerable difference to people’s lives, and despite knowing of the risk associated with a job in policing they have stepped up to the mark.

“In the coming days, these Gardaí will begin their work in communities across the country to guide and encourage, support and protect the public.

"The intensive training that these Gardaí have just completed has helped them to learn, practice, and develop the knowledge and skills required in modern policing.

"Knowing the calibre of this intake, I know that each of these Gardaí are prepared to give it their all to keep people safe, and will be known and recognised by the community they will serve for all the right reasons."