Liam O’Neill, Chairperson of Rosegreen Tidy Village Group thanked Cllr Michael Murphy for the invitation and said it was nice to have the Group’s efforts recognised and appreciated 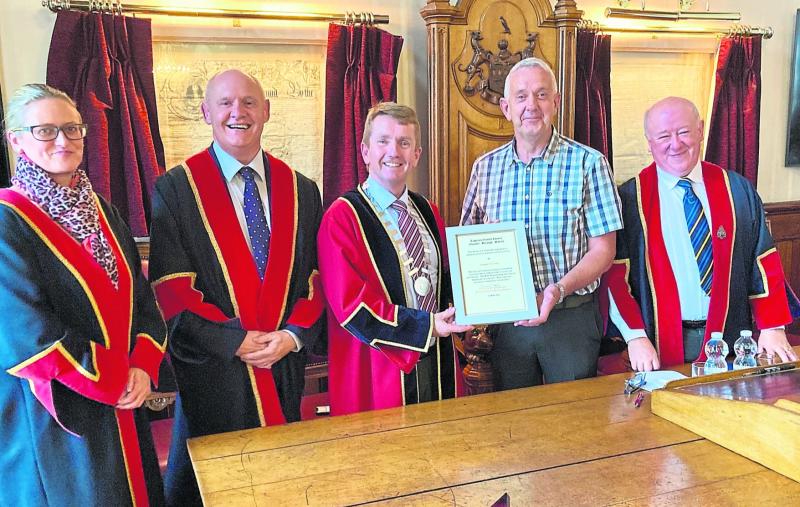 The final reception of Mayor of Clonmel Cllr Michael Murphy’s term in office recently was a special experience and occasion for the volunteers of Rosegreen Tidy Village Group and their family members.

Welcoming the group to Clonmel Town Hall, Cllr Murphy outlined the history of the building and the recent and ongoing repairs to the important and valuable premises on Parnell Street.

Acknowledging that Rosegreen village is at the outermost part of Clonmel Borough District, Cllr Murphy stated he is proud to be associated with Rosegreen and recalled happy memories of his time working in the locality.

He stated it was his honour to extend the invitation of a Mayoral Reception to Rosegreen Tidy Village Group.

He complimented and thanked all the volunteers who work hard to maintain the village and surrounding areas to a high standard.

Mayor Murphy’s address was supported by Cllr John Fitzgerald, Cllr Siobhán Ambrose and Cllr Richie Molloy, all of whom stated it was a joy to drive through Rosegreen and view the developments and accomplishments in the area.

Liam O’Neill, Chairperson of Rosegreen Tidy Village Group, speaking on behalf of the Group, thanked Cllr Michael Murphy for the invitation and said it was nice to have the Group’s efforts recognised and appreciated. He said the efforts Mayor Murphy and others within the council make on behalf of the Tidy Village Group to provide finance and to push forward projects is appreciated.

Stating that the Group is good value for money, with little funding, a lot is provided.
Liam thanked all his colleagues in the Tidy Village Group and the spouses and family members at home who support the work of the Volunteers.

Thanking the Mayor for the Reception, Liam said the Group look forward to the continued support of the council and that the Group will continue asking in the hope the council can provide.