Why? Because her grand-daughter Clara is a key member of the team 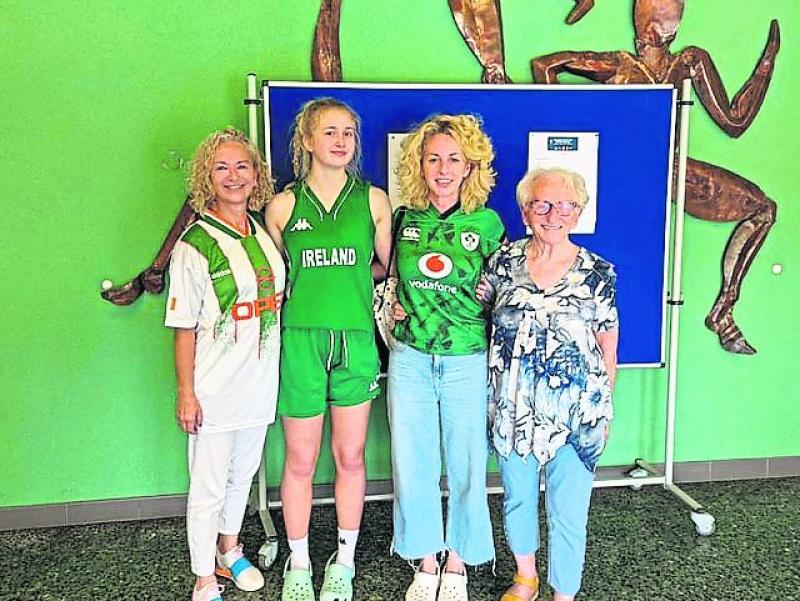 Proud Thurles grandmother Betty Long, Kickham Street, is keeping a very close eye on the fortunes of the Irish U16 girls basketball team these days.

Why? Because her grand-daughter Clara is a key member of the team.

Living in Leixlip, and daughter of Louise Long, Clara is sport mad and plays football and camogie in her spare time, of which there is very little considering her globetrotting antics with the national team - Clara’s father is Garda Inspector Padraig Boyce who won an All-Ireland senior football medal with Galway back in 1998 when they defeated Kildare in the final by four points.

Louise Long, who works with Citi Bank in the IFSC in Dublin, played basketball during her school days in the Ursuline in Thurles, but these days she spends her time following the exploits of her three daughters Clara, Erin and Laoise, all of whom are into sport in a serious way, according to their grandmother.

“They are always off playing something or another and it is brilliant for them,” Betty told the Tipperary Star this week.
Of course Betty’s husband, the late John Long, was very well known in sporting circles locally as one of the main organisers of the community games programme -he helped to set many a sportsperson on their way through life.

Clara has been playing basketball at the highest level once it was discovered that she had a real talent. The Irish coaches soon spotted her through her performances with her club and with Cólaiste Ciarán in Leixlip and it wasn’t long before she was called into the national team.

Already this summer she has been in action in Luxembourg against the host nation and Holland in games they won, while they fell to a talented Portugal side by six points. Next on the road is a trip to Edinburgh and then it is off to Montenegro in August for a two week stint.

“They are very committed to sport and they have been all over the world at different tournaments and events. I visit them very regularly and they are always going to training or coming from training. They love it and of course they make great friends from it all as well,” Betty said.

Clara is going into Leaving Cert in September and will have studies to concentrate on, but Betty is very confident that she will be able to juggle all the demands without any trouble. Incidentally, Erin - Clara’s sister - has just finished shooting in the Vikings, Valhalla series in which she appears.

A talented family - we look forward to joining Betty in watching out for Clara in action in the Irish colours and Erin in The Vikings TV series.