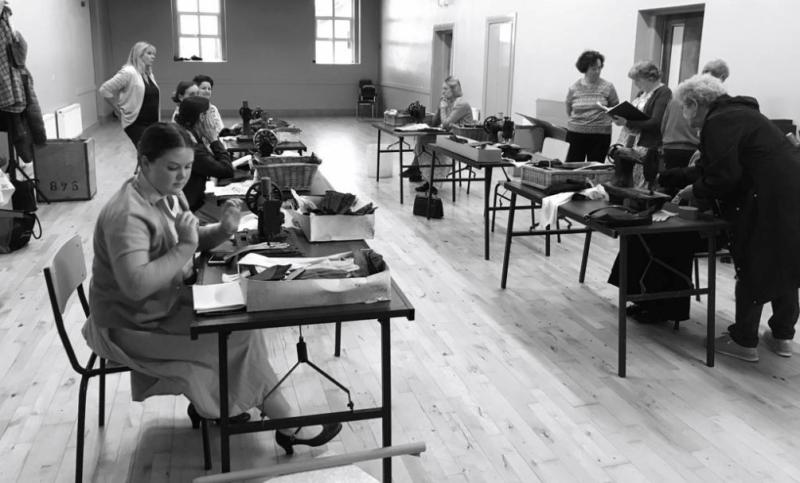 A scene from the re-enactment of Tipperary Glove Factories Remembered

Tipp Town Revitalisation Task Force has a fascinating project for Heritage Week on the history of the gloving industry in Tipperary Town.

Led by Mary Alice O’Connor, the project is a film which recalls a bygone era of gloving in the town.

The film documentary traces the gloving industry from its beginning in the early 1900s to the 1970s, and adds valuable information in the context of the social and industrial heritage of the town.

Dr Denis G Marnane will give a rare insight into the political and economic situation during these years and the impact of this industry on the town.

The re-enactment features local actors and is directed by Jim Keane and produced by Mary Alice O’Connor. The film depicts a typical day in the life of the factory workers at that time.

Themes of immigration and working conditions are mentioned as well as the important social life of the time (such as dancing in the Tower Ballroom).

It is set in the late 1950s at a time when there were a number of small factories engaged in the making of gloves, plus a cottage industry for women working at home and being paid for ‘piece work’ (according to their output).

The film is a tribute to the men and women who worked in this industry and endeavours to recall a bygone era and its influence in the people and in the town at that time.

It will also demonstrate to our young people the working conditions and the problems of immigration, etc, and how far we have come in the intervening years.

In conjunction with the film an exhibition will be hosted at the Tipperary Excel which will feature the memorabilia salvaged from the last remaining glove factory at James Street.

The film was shot in Lisvernane Community Centre with the permission of Aherlow Kilross Community Council.