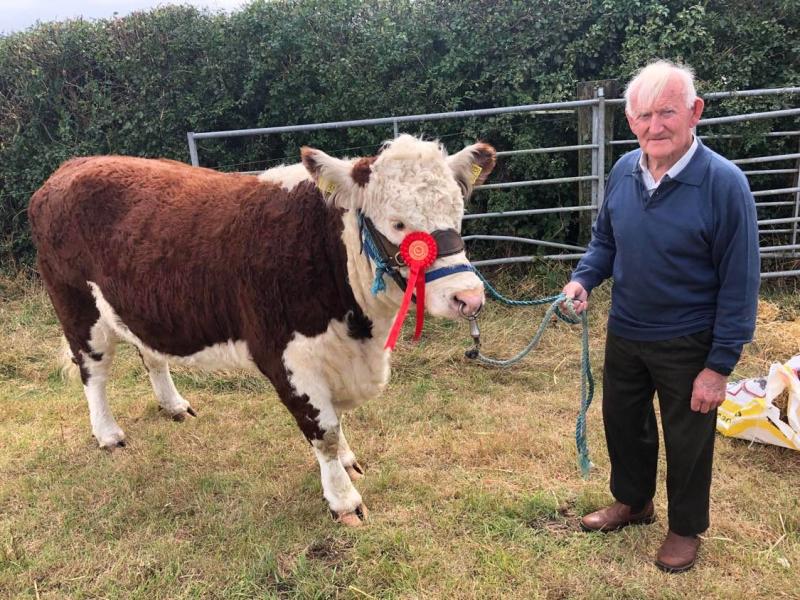 90-year-old Tom Hayes from Kildimo, county Limerick, with the Champion of the Show in the Cattle Section at Bansha Agricultural Show on Wednesday, April 24.

CHECK OUT ALL THE PICTURES IN THIS WEEK'S NATIONALIST

The Bansha Agricultural Show returned with a blast on Wednesday, August 24, and what a day it proved to be for the parish and for the adjoining communities.

The day literally had everything; beautiful sunshine, huge attendance, wonderful exhibits and stalls, carnival atmosphere, music and song and a welcoming air of friendship throughout the showgrounds.

From mid-morning the crowds started to arrive into the showgrounds in the village and by late afternoon the numbers had far exceeded expectations.

In fact I would have to say that it was one of the largest crowds that I had seen at the show in many, many years.

True to the story associated with Bansha Show; Canon Hayes promised that after his death that the show would always enjoy a fine day, certainly came to pass as Bansha enjoyed glorious sunshine for the return of the show.

It was obvious that the two years without the show ensured that it returned with greater numbers and it was wonderful to see so many people coming together renewing acquaintances and friendships and stopping to chat with others that they hadn’t seen in such a long time.

The display of flowers, crafts, produce and art in the marquee was a sight to behold and the stalls and displays throughout the grounds added immensely to the occasion.

There were dogs of all shapes, sizes and colours in the Dog Show and there were the bonniest of babies in the Baby Show.

The Fancy Dress competition brought some very imaginative entries and the atmosphere was electric as the judges reviewed the colourful entrants.

There were very healthy entries across classes in cattle, horses, ponies and sheep and the jumping brought great excitement in the various horse and pony jumping competitions.

The television series “One Man and his Dog” sprung to mind as I made my way down the showgrounds to watch the Sheepdog Trials and after that it was time to head to the Tea Tent where there was plenty to whet the appetite!

In every corner of the showfield there was another familiar face from the past. Someone to chat and reminisce with and to talk about shows from the past.

The atmosphere of the day surpassed anything that I have experienced post-Covid.

There was that great sense of relief in being “free” again and of being able to meet friends old and new.

One of the highlights of the day for me was seeing Tom Hayes from Kildimo, county Limerick, win the Champion of the Show in the Cattle Section. Tom who is 90 years young is a nephew of Canon John Hayes.

He has been coming to the show since it was established by Canon Hayes in 1956.

It was wonderful to see Tom present and lead his entry around the parade ring himself.

It was also ironic that in winning the Champion of the Show that Tom was presented with the Canon Hayes Memorial Cup, named after his uncle who was also the Founder of Muintir na Tíre.

Canon Hayes himself only saw the show for one year as he passed away in January of the following year 1957, but one would tend to believe that the man himself has been watching from above over all the years since and would be particularly proud of his nephew and his success with Champion of the Show 2022.