PREVIEW: A guide to the big races at the 2022 Punchestown festival 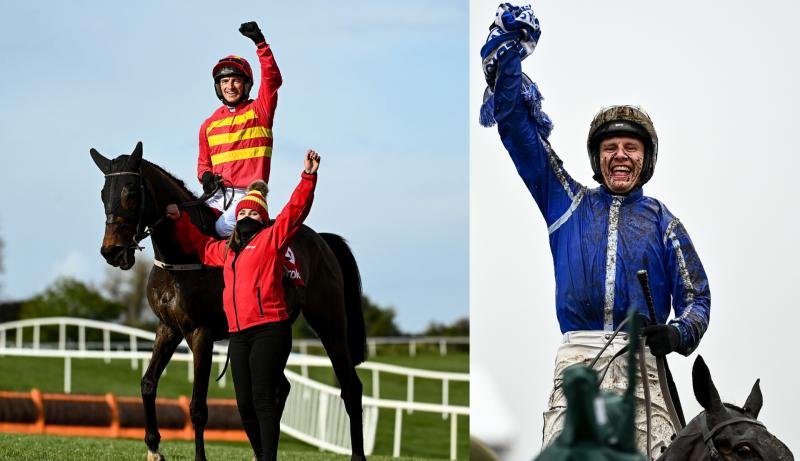 PREVIEW: A guide to the big races at the 2022 Punchestown festival

Having been cancelled in 2020 and staged without spectators in 2021, the appetite for top-class festival action at Punchestown is beyond anything we’ve ever seen in 2022. The jewel in the crown of the Irish jumps season will shimmer in all its glory this month with crowds back and some of the finest national hunt horses on either side of the Irish Sea on show.

While we are now being denied the potential clash between Honeysuckle and Constitution Hill in the Punchestown Champion Hurdle. After Cheltenham, the connections of Constitution Hill were weighing up a tilt at this race but with less than two weeks to go to Punchestown, they made the call to put him away until next season.

Honeysuckle will still be a major draw and crowd favourite and certainly needs no introduction having won 15 out of 15 starts over hurdles, including back-to-back Cheltenham Champion Hurdles. She missed out on the adulation of the Punchestown crowd last year when she stormed to victory in this race ahead of Sharjah. That silent backdrop was replaced by the fervour of the famous Cheltenham roar last month where she and jockey Rachael Blackmore won again, this time beating Epatante by three and a half lengths.

Constitution Hill is the latest pretender to her hurdling crown after a stunning 22-length victory in the Supreme Novices Hurdle at the Cheltenham Festival. Much was made of the quality of that Supreme, the best in years in many books, but he made light work of stable-mate and subsequent Aintree scorer Jonbon. Dysart Dynamo fell amid an unrelenting gallop while Kilcruit, Bring On The Night and JPR One, the only other finishers, were all left in his wake. His winning time was a track record and quicker than that of Honeysuckle later on the same card.

We will have to wait until next season to see the pair clash on track but Honeysuckle could still have a worthy adversary in the shape of Cheltenham Champion Hurdle runner-up and recent Aintree winner Epatante. Trainer Nicky Henderson has said it's still possible she will run despite that Aintree trip in between Punchestown and Cheltenham. Teahupoo is still a young horse in the race but may need to mature a bit more to mix it at the top level. He had won three from three over hurdles in the early part of the season before finishing last of ten in the Cheltenham Champion Hurdle. It's Honeysuckle's race to lose for sure.

Looking back at the Tuesday card, the Punchestown Champion Chase could be a fabulous race. Cheltenham scorer Energumene remains in the field and as favourite against the likes of Chacun Pour Soi, Allaho, Fakir D’Oudaries and Envoi Allen. The two-mile trip is clearly in Energumene’s favour as a specialist but Chacun Pour Soi is a two-time Punchestown winner and won this very race last year. He had Allaho behind him on that occasion and that rival is no slouch, and although a two and a half mile juggernaut, he’s not without a chance dropping back in trip.

Energumene is a worthy favourite, however, having won at Cheltenham and although his biggest rival over two miles, Shishkin, was pulled up, Willie Mullins’ eight-year-old looked impressive. Both of those horses had earlier in the year served up the race of the season at Ascot with Shishkin prevailing by a length. Envoi Allen was 13 lengths in arrears of Energumene at Cheltenham and shouldn’t really reverse the form here but Chacun Pour Soi could. He doesn’t seem to travel well overseas but on Irish soil, he has won eight out of nine chase starts. Write him off at your peril.

Ireland has dominated the Cheltenham Gold Cup in recent years and the Punchestown equivalent could produce a rematch between some of last month’s big players on Wednesday’s card. While Cheltenham Gold Cup winner A Plus Tard has been put away for next season already, runner-up Minella Indo is in the line-up for Punchestown. He was some 15 lengths behind his stable-mate at Prestbury Park but did finish ahead of the likes of Protektorat, Galvin and Al Boum Photo.

The latter two are entered here and have great chances. Galvin went off second-favourite at Cheltenham and despite not always being fluent at his fences, he plugged away for fourth spot. Al Boum Photo, now a ten-year-old, was sixth, a further three lengths in arrears. The two-time Cheltenham Gold Cup winner is probably past his best now and has twice finished runner-up in this race, including last year when Clan Des Obeaux landed a rare blow in the race for British trainers.

That horse has a great chance again plotting the same route to the race by winning at Aintree again during the Grand National meeting. Kemboy could also come into the reckoning. Third in that Aintree race, he won this race in 2019, giving Ruby Walsh his last ever winner before retirement.

THE RACECARDS AT A GLANCE

TUESDAY'S CARD
Back on Irish soil and hopefully unaffected by his Cheltenham fall, Dysart Dynamo has a great chance of adding another win to his record in the Champion Novice Hurdle

TUESDAY'S CARD
Bob Olinger could take some stopping in the Champion Novice Chase in the absence of Galopin Des Champs. Lifetime Ambition would also be interesting for Jessica Harrington

WEDNESDAY'S CARD
A mouth-watering rematch between Cheltenham bumper winner Facile Vega and runner-up American Mike looks on the cards but keep an eye out for trainer Stuart Crawford who could be the fly in the ointment.

FRIDAY'S CARD
If Burning Victory turns up in the Mares Champion Hurdle, she’s not without a chance with good course winning form

Punchestown 2022 looks set to be an incredible bookend to an already amazing season and with some big British rivals likely to make the trip, it may be a nice renewal of rivalries. It will also effectively bring the curtain down on the Irish champion trainer and jockeys championships. The return of the crowds will only add to the one of Ireland’s greatest sporting spectacles.

Punchestown 2022 takes place from April 26 to April 30. Find out more at www.punchestown.com.