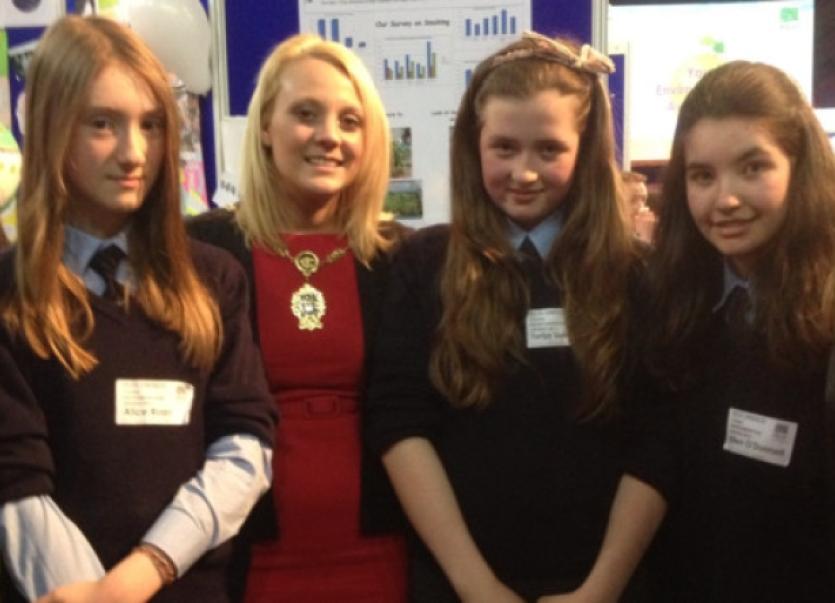 Three students from Rosegreen took part in the finals of the ECO UNESCO Youth Environmentalists Awards in the Mansion House in Dublin last Wednesday.

Three students from Rosegreen took part in the finals of the ECO UNESCO Youth Environmentalists Awards in the Mansion House in Dublin last Wednesday.

Ellen O’Donnell, Torija Skietniece and Alice Ryan first presented their project ‘Butt Out – What effect has tobacco on living things’ at the BT Young Scientist Exhibition in January of this year.

The sixth class girls undertook a project to study what effects tobacco and tobacco smoke had on plants at different stages of their growth and development. Work started on the project over a year ago. The girls carried out a number of experiments, conducted a survey and produced a short animated programme to demonstrate their findings.

The girls were then invited to take part in the ECO UNESCO youth environmentalists awards competition. This is an all-Ireland awards programme that recognises and rewards young people who raise environmental awareness and improve the environment.

‘We had to look at our project from a different angle’ said Torija. ‘We had to decide what effects tobacco and tobacco smoking had on the environment ‘added Ellen. ‘It was part of the project to get our message out so we contacted our local radio station Tipp Mid West and were interviewed by Seamus King on 31st January 2013’ said Alice.

The girls developed a website www.rgecokids.weebly.com and prepared and distributed leaflets to get their message out. The girls also found it very helpful to their efforts that ‘The Nationalist’ ran an article on them on 23rd January 2013.

The girls were chosen to take part in the Munster Eco Dens which ran in Cork before Easter. The girls had to present their project to Eco dragons not unlike Dragons Den. This was a wonderful experience. After Easter the girls were delighted to find out that they had got through to the finals in Dublin.

On the day the girls arrived early in Dublin to set up their exhibition in the historic Round Room of the Mansion House. The atmosphere was fantastic with music playing and different finalists going on stage to perform.

The judges went around during the morning and the girls gave a good account of themselves. They also met with the Deputy Lord Mayor of Dublin who was very impressed with their project.

After lunch, Stephen Byrne of Twotube hosted the awards ceremony which was dotted with music and dance. There was a Capoeira display. This is a Brazilian martial art which combines elements of dance and music. In addition an up and coming band, JJ Jupiter, played and contributed to the atmosphere. The highlight of the day was the arrival of President Michael D. Higgins who delivered an uplifting speech and presented the awards to the three overall winners.

Ellen, Alice and Torija’s project was highly recommended and they received certificates for their endeavours.

The girls are grateful for the help which they received from their parents and teachers. They say that they gained so much from taking part in these competitions and they look forward to bringing their project to the next level.

Their message to their peers continues to be ‘Smoking tobacco has a huge negative impact on living things’.