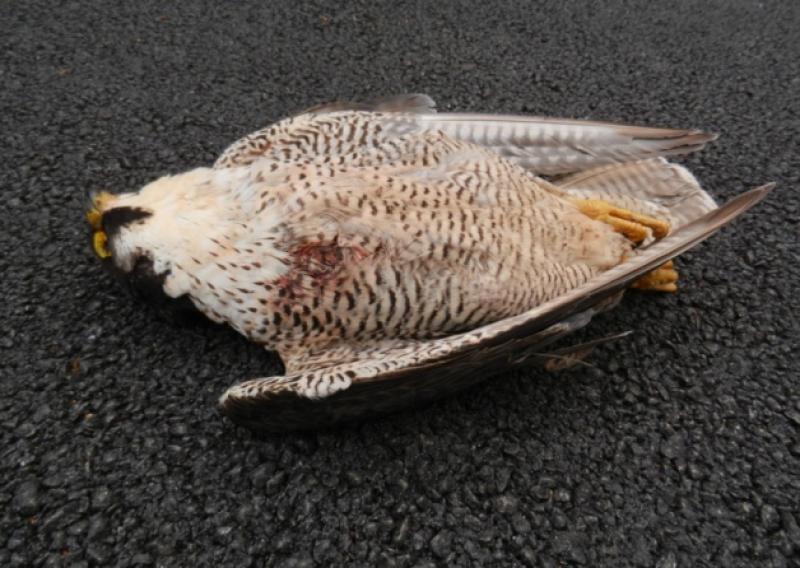 A wildlife enthusiast and conservationist has reacted angrily to the killing of two Peregrine Falcons that had been roosting in Lisronagh.

A wildlife enthusiast and conservationist has reacted angrily to the killing of two Peregrine Falcons that had been roosting in Lisronagh.

It is believed that both birds were shot and according to local man Kevin Collins - who writes a wildlife column for The Nationalist - the matter has been reported to the gardai.

The killings have also been condemned in the village where the two birds had become a popular attraction.

Mr Collins has not only hit out at the cruel killings of the male and female birds but said such actions, as well as the poisoning of eagles in County Kerry, will hit Ireland’s ‘green’ image and damage our agriculture and tourism reputation.

It is believed that two chicks born to the falcons are also dead.

Mr Collins said that all through the winter and spring, the pair of Peregrine Falcons roosted on the bell tower of the ruined church at Lisronagh, between Clonmel and Fethard.

“When the pair was still there in June, I thought they must be nesting. On June 15 I went into the church to see if there were chicks visible or if the parents would react to my presence.

“To my horror I found the adult female dead on the floor, at the base of the bell tower. She had been shot”.

Mr Collins said he immediately contacted Sean Breen, the local NPWS Conservation Ranger and he, in turn, contacted the Gardai in Clonmel.

“Within a few days we got news of another Peregrine which had been shot and wounded near Cahir. It was taken to an animal welfare facility in Kilmallock but it will never fly in the wild again.

“In the meantime, two young Peregrines fledged from the Lisronagh nest and the male continued to feed them. At some stage in July came more bad news - the male had been killed, probably shot.

“The two young Peregrines were not able to hunt for themselves and probably starved to death”.

Mr Collins points out that these large falcons are protected under the Wildlife Act in Ireland and are listed in Annex 1 of the EU Birds Directive, which requires governments to make special efforts to protect them.

He says the Peregrine was almost driven to extinction in the 1960s, due to persistent organochlorine pesticides. When these were banned, the numbers of Peregrines slowly recovered.

“Normally a very wary bird, it was remarkable that this pair would nest so close to where school children played every day.

“The church is less than 100 metres from Lisronagh National School. The people of Lisronagh had taken these birds to their hearts and were disgusted when they heard the news of the persecution of their falcons”.

He continued - “We don’t know who carried out this despicable act or what their motives are. Birds of prey, also known as Raptors, have been persecuted for many years and the practice is barbaric and illegal.

“Most people will be aware of the numbers of White-tailed Eagles that have been poisoned. These birds were part of a reintroduction project in Co. Kerry.

“Only last week, a county Councillor from Limerick called for an ‘open season’ on Hen Harriers unless changes are made to the designation of SPAs (special areas of conservation).

“As top predators, raptors are an integral component of a healthy and functioning ecosystem. Several of our birds of prey were driven to extinction by human influence during the 19th and early 20th centuries.

“The modern day cruel and indiscriminate use of poisons in addition to other forms of persecution has the potential to not only devastate their populations once again, but also impact on a wide range of other wildlife and seriously damage our “green” image, of particular importance to our agriculture and tourism sectors”.