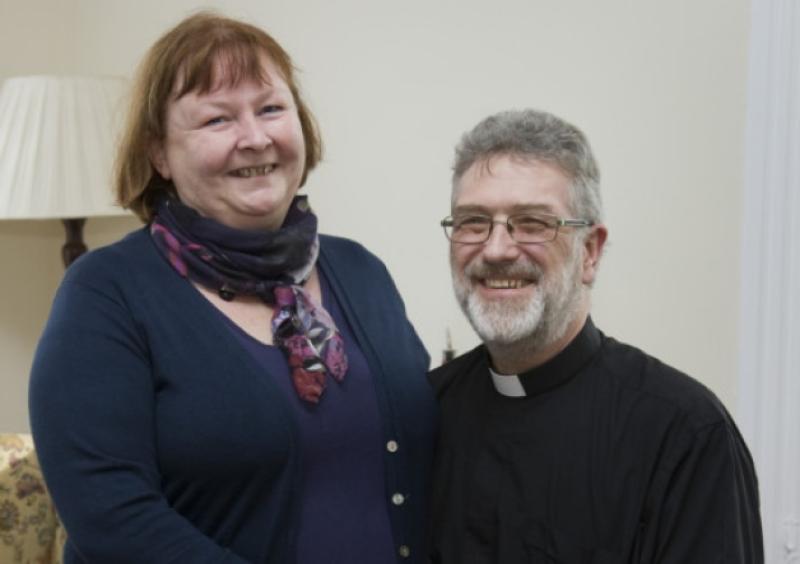 They say that wisdom can come from the mouths of babes, and in a way that was how the new Dean of Cashel has come to join the local community.

They say that wisdom can come from the mouths of babes, and in a way that was how the new Dean of Cashel has come to join the local community.

Rev. Gerald Field is in his first weeks as Dean of the Cashel Union of Parishes and just getting to know his congregation and neighbours. His official installation took place at Cashel Cathedral, two weeks ago, and he is very much looking forward to starting his work in the area.

The new Dean comes to Cashel from England, by way of Tullamore. He grew up in the Preston area of Lancashire and following university in London carried out most of his ministry in the North East of England until 2001 when he moved to Ireland with his family as Rector of the Tullamore Union of Parishes.

The move was a natural one for the young family - Gerald is married to Lucy whose family live in Roscommon. Family holidays were spent in Ireland with them and it was on one car journey back to the ferry home that the voice of his young son in the back seat asked ‘daddy why can’t we live over here?’

The family made the move and Rev Field spent the last 13 years as rector in Tullamore. The family were very happy there. In fact the Dean wasn’t looking for a move, but he was approached about moving to Cashel on the retirement of Dean Philip Knowles. While it came as a surprise Rev Field discussed it with his family, met with the Church of Ireland Board of Nominations, gave it a lot of thought and prayer, and accepted the position in South Tipperary when they offered it to him.

In a happy twist of fate, one of Gerald and Lucy’s four sons had moved to Cashel a month before the initial contact was made with his father about coming to the town, and on the day the phone call came to offer him the job Rev Field was in Cashel helping his son to move in to his new apartment!

The couple’s four sons are now grown up and two still live in Tullamore, with another in England.

Having experienced ministry in both the UK and Ireland, Rev. Field says there are some differences but many similarities. In England because the Church of England is the established chucrch everyone tends ot class themselves Church of England. His last parish had a congregation of 12,500 and two churches. Tullamore had a Church of Ireland congregation of 360. But church attendances were fairly equal and the fiancial support fo the church in Ireland was as good. In terms of visiting parishioners the smaller community here allows Rev Field to make more calls to people at times other than for official ceremonies. In the UK he officiated at two or three funerals a week and five or six baptisms a month. In Ireland, he says, it’s lovely to have more time to make visits, you also get to know people a lot better.

The family made good friends in Tullamore and 40 of his now former parishioners came to Cashel for Rev. Field’s installation.

Although he and his wife haven’t been in Cashel long Rev Field says local people have been very welcoming. There was a huge turnout for the installation ceremony, the cathedral was full and many stayed for the refreshments later, giving him a chance to mingle with the many new faces.

Being Dean of Cashel as well as rector brings an added dimension to his work, Ref Field says, but he says it’s important to him that parishioners see his role as their rector not just as Dean. It will be a learning process for him too, he says, but he will marry the roles in a way that they will not distract from each other.