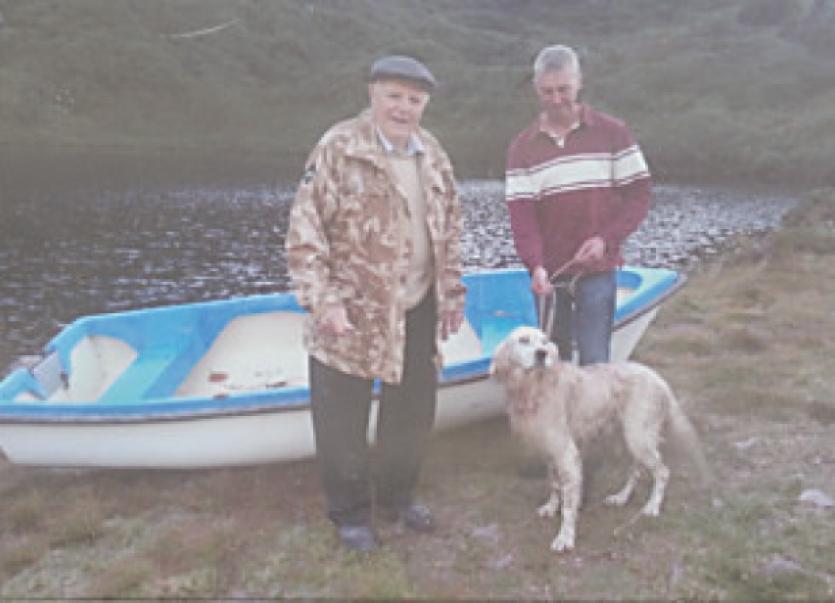 How often have we heard it said that a man’s best friend is his dog, but in this little tale of friendship, it definitely worked in reverse, the master being the animal’s best friend and more.

How often have we heard it said that a man’s best friend is his dog, but in this little tale of friendship, it definitely worked in reverse, the master being the animal’s best friend and more.

A lifetime fishing and shooting enthusiast, 86 year-old Peter has kept dogs all his life, mostly Setters and Golden Labradors, to help around the farm but more so to accompany him on shooting trips, which sadly now are less frequent than before.

On 1st September last, at the commencement of the grouse shooting season, a good friend of his, Eddie O’Brien from Bohernagore, Clogheen, took ‘Ben’ off for the day to go shooting on the Knockmealdown Mountains.

“He was a right good dog, a very friendly Llewelyn Setter and would go with anyone who had a gun,” said Peter.

“And the day on the mountains, over Araglen way, was going fine for Eddie and his friend (Jimmy Dunne), and the dog was no problem. After hunting for about three-quarters of the day the dog suddenly came back to Eddie and looked at him in a strange way as if to say he had enough. He went for home then and no matter what calling Eddie did the dog just kept going.”

According to Peter in recalling the story, “after about two miles of travelling he would have come to Bay Lough, of Petticoat Loose renown and all that. The dog knew where he was going alright but that day instead of going left or right around the lake, for some reason he went down straight towards the lake. And he got lost.”

“Meanwhile back on the mountain Eddie and his friend were in a terrible state not knowing where the dog had gone or what might have become of him,” said Peter, who wasn’t to be made aware of what was unfolding for another few days.

“For the next three days, Monday, Tuesday and Wednesday, day and night, Eddie and his family (wife Anne and sons Billy and Cian) kept looking all over for the dog. They also contacted the Gardai and local Clogheen garda, Philly Ryan, himself a great shooting man, helped in his own time searching,” added Peter.

At this stage hope was fading and the mystery of where ‘Ben’ had vanished to remained unsolved.

“It was only on the Thursday evening that there was ‘something’. Penny Fennessy, a local woman from Clogheen, was out walking around Bay Lough and she thought she could hear a dog barking in the trees but couldn’t see anything.” On the Friday Penny and Davy Quinn returned to investigate further and once more heard the dog but couldn’t get near the distressed animal.

Peter explained that one side of the Corrie Lake at Bay Lough is inaccessible because of the invasive growth of large rhododendrons and these trees and shrubs are now so intertwined that it is almost impossible to get through them. “Ben was in there and they couldn’t get to him,” he said.

On Friday, five days after going missing, Eddie O’Brien decided that the only hope they had was to take a boat across the lake and hope they might catch the dog. The same day the South East Mountain Rescue group were contacted and eight volunteers arrived at the lake and togged out ready to join the search. Lo and behold just as Eddie got to the Rhododendron side of the lake ‘Ben’ emerged from the thick undergrowth and one didn’t know from the other who was more delighted at the reunion.

An emotional Peter, who only heard of the dog’s disappearance for the first time that Friday morning, was waiting for his ‘best friend’ at lakeside and said of the dog after being missing for five days “he looked so weak and thin at the time that I hardly knew him at first.”

Gladly now all are good again, ‘Ben’ is back to a healthy weight and full of fun but perhaps at 11 years-old his hunting days are over.

As for Peter, a great gun and rod man, who fished and shot everywhere, home and abroad for decades, there are a million stories still to tell.

Such as the day in the late 1960s when in about an hour or so, he caught eight huge salmon just above the weir in Ardfinnan, and then Donal Wylde from ‘The Nationalist’ came and took his photo for the paper. “The smallest of the salmon that day was 18lb in weight and I sold it to local butcher Tommy Myles for 30 shillings. The other fish weighed 21lb, 22lb, 23lb and around that,” Peter proudly recalls.

Another story was also very memorable but in a different way. “Back in 2009 I was shooting wild pink-footed geese in Scotland between Aberdeen and Inverness when a former British soldier back from Afghanistan decided to shoot at us instead. We won’t go into it but we were lucky to get out alive. The story was in ‘The Nationalist’,” Peter added.

But somehow, when all is said and done, you get the impression that the little story of ‘Ben’ and the amazing concern and kindness shown by so many friends last September is the story that means most to Peter. For all that friendship, and on behalf of ‘Ben’ and himself, Peter says thank you from the bottom of his heart to one and all.