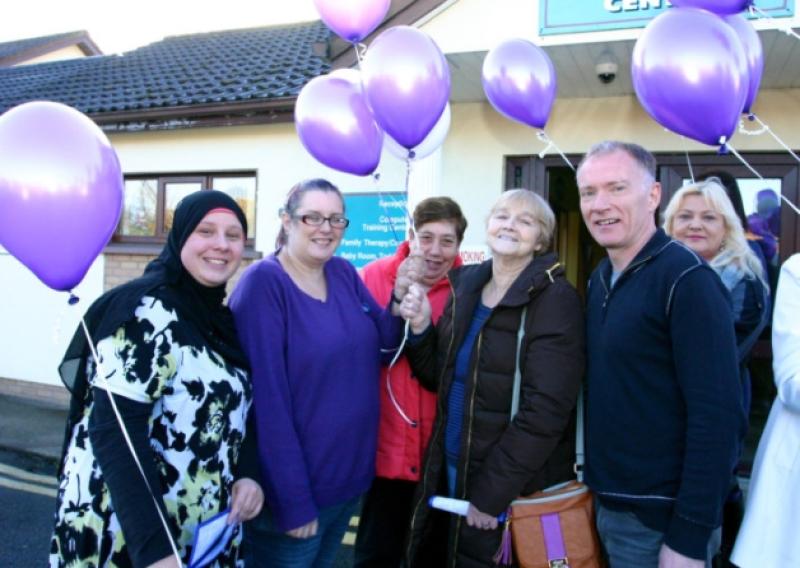 “We wanted to do something to promote awareness of this campaign,” said Ruth Smith (KRC). “Since 1996, 204 women have died violently in Ireland and Women’s Aid respond to over 17, 000 calls every year. It is shocking that there should be 424 family places in refuges in Ireland when in fact, there is only 143 and funding continues to be cut.”

The annual Women’s Aid ‘One in Five Women’ 16-days campaign focuses on solidarity with the one-in-five women who are affected by domestic violence. The 16-days campaign is an important opportunity to raise awareness of the issue at a national and local level.

“The Cuan Saor Women’s Refuge centre in Clonmel provides a safe place for women and also works towards providing a safe place for them in their homes,” explained Martina Kiloran, Services Manager at Cuan Saor.

Erica Ward, an outreach worker for Cuan Saor told the group about the number of outreach clinics all around South Tipperary. “We support and empower women in whatever they need. We work with women who experience poor self-esteem, mental health and substance issues and we would provide a link-in to help them.”

Women’s Aid and groups around Ireland have been working to address domestic violence for 40 years. Every day in Ireland women are beaten, raped and trapped in their own homes by those closest to them - their husbands, boyfriends and partners. One-in-five women in Ireland experience domestic violence at some point during their lifetime; it can affect any woman and it can happen in any home.

“We always need the support of the community, voluntary sector and resource centre’s behind us as no one service can be all things to all women who experience domestic violence,” explained Geraldine Mullane, Project leader for Cuan Saor. “Christmas can be a very difficult time but remember we are available 24/7 with a free phone helpline 1800 576757.”

The Tuesday morning women’s group at Knockanrawley hosted the event that included refreshments and members of the KITE group were also in attendance.

The attendees completed the seminar by releasing groups of five balloons, four purple and a single white balloon with the One in Five logo that visually represents the number of women who will experience domestic violence in Ireland. In 2013, over 140 groups across Ireland took part in the National Balloon Action organising their own events, coordinated by Women’s Aid, sending a strong message that domestic violence is not acceptable in our communities.