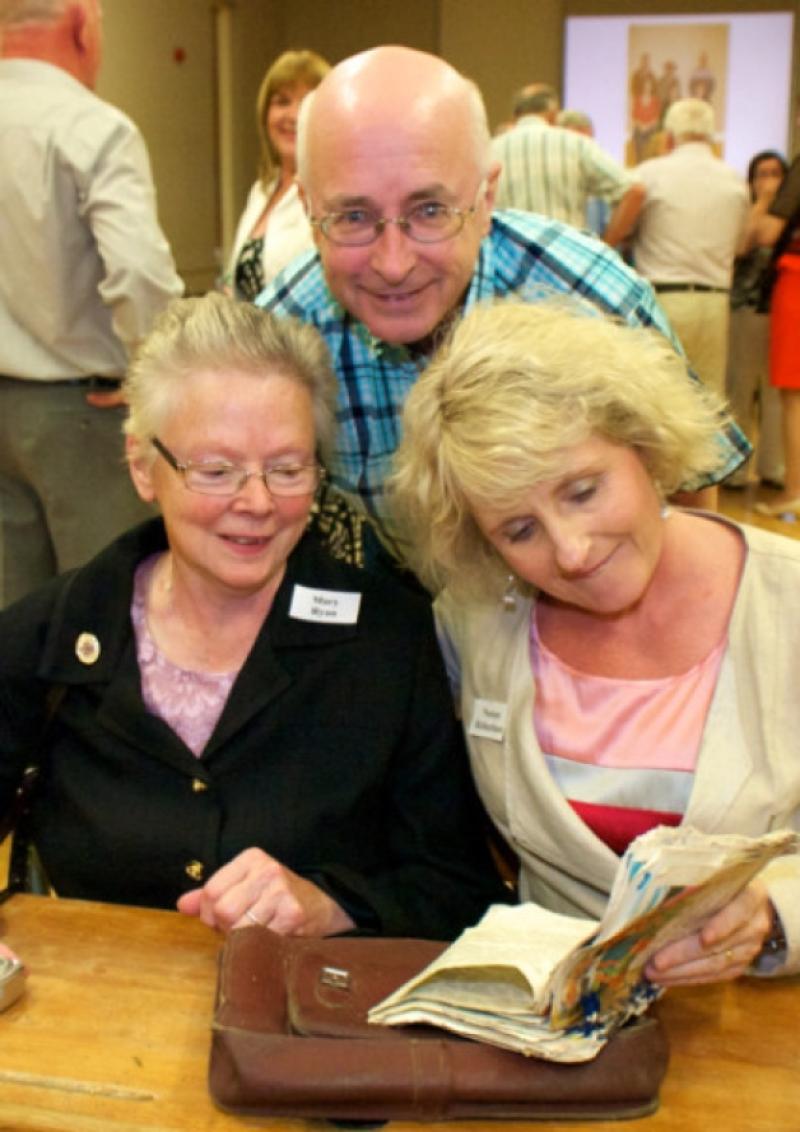 The gathering Ireland 2013 Lisvernane National School Reunion 1911-1971, took place on Saturday, August 17 with many “Hello’s”, “Great to see you’s” and “How are yous?” being exchanged.

The gathering Ireland 2013 Lisvernane National School Reunion 1911-1971, took place on Saturday, August 17 with many “Hello’s”, “Great to see you’s” and “How are yous?” being exchanged.

Surprise and joy from seeing old class mates and catching up on family news and “where are they now?” questions was heard all over the community centre that stands in place of the old National School. Over three hundred visitors from all over the Ireland and the UK took the opportunity to study the old registers, sit at the old school desks and remember names, faces and stories from their school days in Lisvernane.

Ninety year old Katie O’Dwyer (nee Griffin) is the only surviving sister of Jack, Bill and Packie and one sister Mary married to Pat Kelly (shop in Tipperary town). “I was the youngest of my family and attended Lisvernane N.S. 87 years ago. Principal Chris Lee, his son Thomas and Miss Kate Hogan were the teachers and we had a special with Lee’s because they were local. At that time we had the freedom of the village to play with no cars to worry about,” said Katie.

Johanna Murphy, another oldest surviving pupil, shared her recollections in “I was always first into school and my job was to light the three fires. I used to get slapped every day and I never knew why… I spent more time facing the wall than I did in my seat. At break we went to Mrs Coffey’s (nee Moroney) to have hot milk and on our way home Paddy MacDonagh would give us a slice of lovely soft bread.”

Members of the large Moroney family including the infamous Effin Eddie Maroney was at the gathering. “Shovelling in the turf into the shed was hard work but it got you out of intensive school work. We’d have to draw it in in a bucket and keep the fire going and bring the master what he need.

“You Moroney, you’re the liveliest of them all, go out and get me a glass of water as I’m shouting the lessons and nothing’s getting through – you mightn’t be listening but you’ll get me what I ask!” said Eddie. “ And the girls would torment you for a little waltz or to play with them.”

The McGrath family, with 12 out of the 13 children attending school in Lisvernane, were represented by John McGrath Ballyanna, Galbally and his sister Ann. All of the brothers and sisters are still alive and well with Patrick (Pat the merchant) nearly 81 years old living in Emly and Ann the youngest now living in Clonmel. “I have many memories of the coming and the going walking 2 miles to school and being on time whatever the cost,” said John.