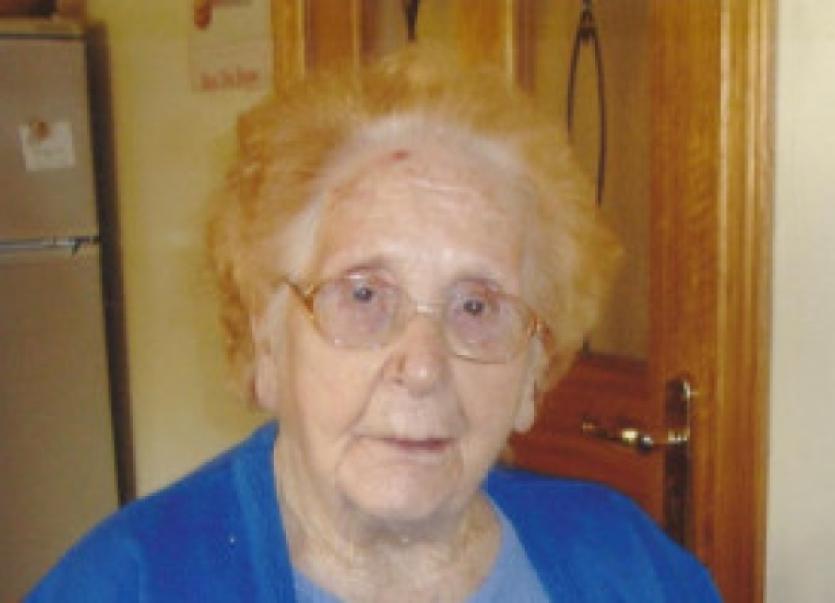 Mary Carr from Glengar, Cappawhite was one of the country’s oldest citizens when she passed away last month at the grand age of 102.

Mary Carr from Glengar, Cappawhite was one of the country’s oldest citizens when she passed away last month at the grand age of 102.

Family and friends of the mother of seven gathered at Doon Parish Church last Friday, January 3 for the month’s mind Mass in her memory.

She died following a short illness on December 3 just over a month after celebrating her 102nd birthday.

Mrs Carr (née Sweeney) lived in Glengar all her life. She married county council worker James Carr in 1940 and the couple had seven children, three boys and four girls.

James sadly passed away in 1970 and her daughter Mary-Ita also pre-deceased her. Mary-Ita died in 1995 at the age of 54. Mrs Carr was a devoted mother and home maker and she credited her longevity to hard work and plenty of exercise,

She lived with her daughter Jenny O’Meara and her family at Glengar in the last eight years of her life.

“She was interested in gardening and was always knitting and sewing for us all. She was a quiet lady but very strong willed. I think that is what made her live to such an age. She took everything in her stride,” Jenny recalled.

Apart from a broken hip in 2005, Mary Carr enjoyed good health up to last September and even had a week’s holiday in Dublin in August. In her last months, she was nursed at home with the help of Dr Philip Dunne, nurses Catherine McCarthy and Nora O’Dwyer and care assistants. A Mass was celebrated at her bedside by Fr Tony Ryan PP on her 102nd birthday on October 28.

Her death on Tuesday, December 3 has left a deep void in the hearts of her beloved family. She was waked at home on the day she passed away. Her remains were removed from White’s Funeral Home in Doon to Doon Parish Church the next day. Requiem Mass was celebrated on December 5 by Fr Tony Ryan PP with concelebrants Fr Pat Coffey and Fr Tadgh Furlong. Mary Carr is survived by sons Dan, Denis and John, daughters Joan, Bridget and Jenny, 19 grandchildren and 12 great-grandchildren, other relatives and friends.