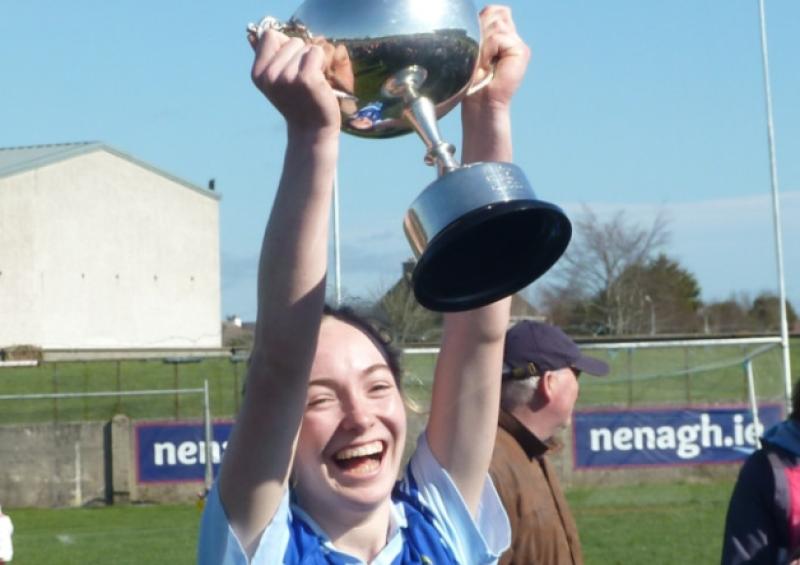 History was made on Saturday when Colaiste Dun Iascaigh’s Junior Camogie team captured the Colaiste’s first ever All Ireland camogie title.

History was made on Saturday when Colaiste Dun Iascaigh’s Junior Camogie team captured the Colaiste’s first ever All Ireland camogie title.

The Cahir girls defeated Calasanctius Oranmore 6-20 to 3-9 in the Junior B competition, at McDonagh Park, Nenagh.

Having lost two previous junior All Ireland finals, in 2011 and 2012, for the majority here it was their third attempt and from the throw it was obvious that the hunger was there to finish the job this time round. A few positional changes saw Aisling Moloney at centre back, Ciara Hickey at full back to counter the threat of Eimear O’Donovan and Sacra Mannion with Aoife Corcoran slotting into corner forward. It was Corcoran who opened the scoring with a fine point. But the following 14 minutes saw CDI blitz their opponents scoring four goals to leave Calasanctius shell shocked.

Captain Caoimhe Condon operating at full forward tormented the Galwegians full backline and would end up with a personal tally of four goals, three in the first half and one in the second half. This was despite Calasanctius’ efforts to put two defenders on her. Centre forward Roisin Howard completely dominated at centre forward racking up 1-7 in the first half and when she wasn’t scoring she was setting up attacks for Aoife Corcoran, Caoimhe Condon and Kathy Farrell to score. The hardworking Farrell scored 1-1 with Corcoran picking up 0-3 from play during the course of the half.

Calasanctius did respond with two goals during the half but at every turn CDI’s defence dealt with the majority of the Connacht Champions attacks. At centre back Aisling Moloney commanded all before her and would see her pick up the player of the match award for her efforts. Whilst keeping Calasanctius’ star forward Eimear O’Donovan under wraps, she rained missiles on top of the opposition’s half back and full back line to keep CDI’s forwards well supplied with ball. Dervla Buckley in goals was cool and calm when called upon and her puck outs always found a blue and white jersey. Full back Ciara Hickey kept Sacra Mannion also at bay and was ably assisted by Kirsty Arbuckle and Helena Walsh. While outside them Linda Murphy and Fiona Burke at half back had the measure of their opponents. The young pairing of Lauren Noonan and Caoimhe Ryan at midfield despite the high temperatures covered enormous ground over the course of the game. The half time whistle saw CDI with a commanding lead 5-11 to 2-3.

Calasanctius who had lost the Senior B All Ireland Final the previous weekend were expected to mount a comeback which did materialise briefly early in the second half. But it was mainly from frees from Eimear O’Donovan and a goal late in the second half. In response CDI racked up 1-9 from play to maintain a healthy lead throughout. Aisling Moloney continued to hoover up ball at centre back whilst Roisin Howard, Caoimhe Condon and Aoife Corcoran continued to pierce the Calasanctius defence and put scores on the board. Likewise Shauna Burke and Niamh Murphy’s work rate did not go unnoticed throughout the game. Substitutes Alyssa Keating, Laura Casey, Jessica Coffey, Emily Donovan and Zoe Lynch made solid contributions when introduced. It was truly fitting that first year Caoimhe Ryan tapped over CDI’s final score to bring the final tally to 6-20.

The final whistle was met with great celebrations as CDI had finally achieved what had eluded them on two previous occasions and captured the All Ireland title. Captain Caoimhe Condon thanked Nenagh for the excellent pitch, Calasanctius for being sporting opponents and Coach Keith Morrissey and selector Denny Whelan for their hard work. This great journey began back on a cold day in October on a pitch in Dromcollogher, Co. Limerick, with many trials and tribulations to get to the final. But credit must also be given to the two local clubs Cahir and Brian Boru’s for all the work being put in and of course the girls’ parents who have followed the team through thick and thin during the year. And finally thanks to all those well wishers and the supporters who turned out on the day to cheer on the team.