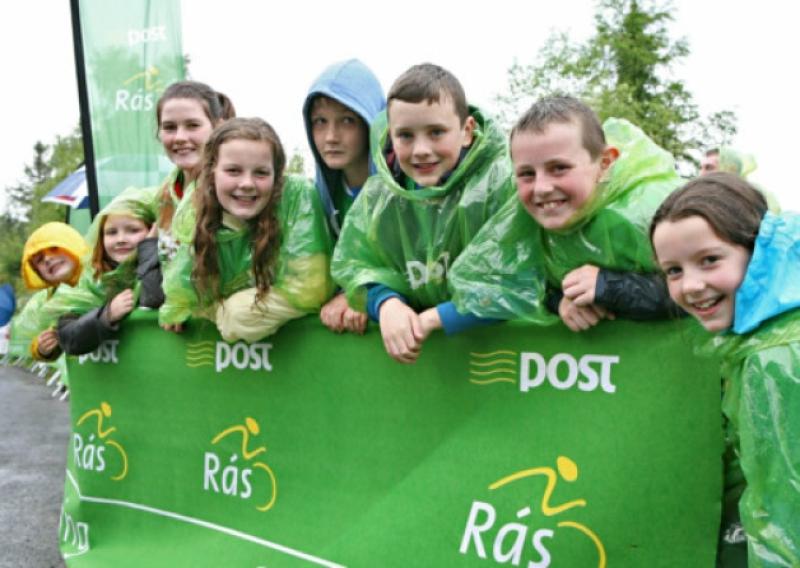 The heavens may have opened shortly before the 140 competitors in the An Post Rás swung into Carrick-on-Suir last Friday afternoon but that didn’t stop the town from rolling out the red carpet to welcome the country’s most prestigious cycling race.

The heavens may have opened shortly before the 140 competitors in the An Post Rás swung into Carrick-on-Suir last Friday afternoon but that didn’t stop the town from rolling out the red carpet to welcome the country’s most prestigious cycling race.

The sixth stage of the tour finished at the top of Seskin Hill and there to cheer on the exhausted competitors were a large crowd of spectators, who donned suitable rain gear for the occasion and were entertained by local musicians as they waited for the cyclists.

Austria’s Markus Eibegger of the Synergy Baku team was rewarded for a brave ride with victory on the hill made famous by the great Sean Kelly.

He led throughout and had enough in reserve to repel the challenges of Owain Doull (An Post Chain Reaction) and Patrick Bevin (New Zealand National Team) at the end of a rain sodden 168 kilometre trek from Clonakilty.

Mark Dowling (DID Dunboyne) and Eoin Morton (UCD) were the best of the Irish on the cold and windy day finishing seventh and eighth respectively. Carrick Wheelers cyclist Sean Hahessy made his Rás debut replacing Ciaran Power on the Waterford team.

By the time the race reached the foot of Seskin, a breakaway group of 7 riders was out in front including Eibegger, Patrick Bevin, David Chopin and Matteo Collodel.

The excitement climaxed when Chopin attacked. Bevin chased hard and motored up the climb, alongside Collodel, catching Chopin to make it a lead group of three with only one kilometre to go.

In the final few hundred metres, it was Eibegger who gritted his teeth and found another gear, bridged the gap and was able to suffer the most to take the stage win.

In his post-race interview, the Synergy Baku rider said “On the last climb I just made one massive pull and thankfully it worked out. I’m really happy with it.”

Local Rás Stage finish co-ordinator Billy Kennedy reported that hotels in Carrick, Clonmel and Waterford were booked out accommodating Rás cyclists and their entourages on Friday night. The local Carraig Hotel was the Ras headquarters for the occasion.

The Rás cyclists departed from Carrick on Saturday morning for the seventh stage of the tour. Before the start, the competitors paraded through the town centre led by Carick-on-Suir Brass Band and a group of young cyclists from the Iverk Carrick Wheelers Cycling Club.

Mr Kennedy said there was a great atmosphere in Sean Kelly Square as the cyclists and their team vehicles left on the long journey to Baltinglass.

He was delighted with the level of support the received from the people of Carrick and local organisations including Carrick Business Association, Carrick Tourism and Economic Committee, the Garda Siochana as well as Carrick Town Council, South Tipperary and Waterford Co. Councils, which did a lot of work on road improvements along the race route.