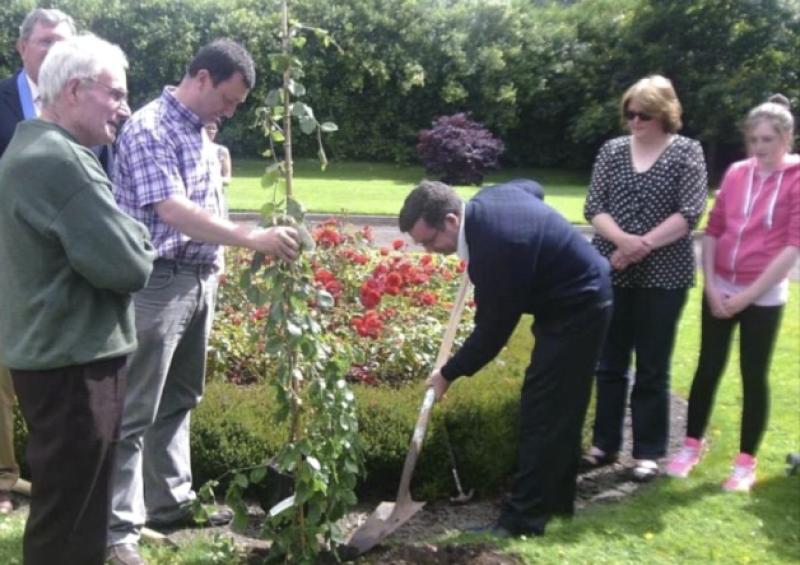 The Mount Sion Community residence paid tribute to community activist the late Paddy Buckley, when a tree was planted in his memory at an Afternoon Tea Party in the grounds of Mount Sion.

The Mount Sion Community residence paid tribute to community activist the late Paddy Buckley, when a tree was planted in his memory at an Afternoon Tea Party in the grounds of Mount Sion.

The sun shone brightly as the residents, staff and friends of Mount Sion gathered to remember one of the founder members of the ‘Friends of Mount Sion’ organisation, the late Paddy Buckley, who died following a short illness on February 27 this year.

“Paddy was one of the first to step forward when a call went out for help after Mount Sion was opened in June 1997. The then Nurse Manager, Anne Costigan asked for help to raise funds for a vehicle to transport the residents around town; shops, Mass etc., and one of the first to come on board was Paddy Buckley,” said Martin Quinn, Chairperson of Muintir na Tire.

For the next 17 years Paddy gave his all to support Mount Sion and to keep a watchful eye over the fund-raising. Even after the loss of his beloved wife Nora he continued to keep Mount Sion at the top of his list and very few days went by that Paddy didnt make a call to Mount Sion accompanied by his faithful friend Cyril Brennan.

It therefore seemed so appropriate that Paddy’s memory would live on in the beautiful grounds of Mount Sion with the planting of a tree in his memory. His friend Cyril along with family members, Seamus, Noel, Georgina and Meadhbh and the Mount Sion Community gathered around the tree and took part in the planting and as they did so many in the gathering recounted their memories of Paddy in what was a really touching and emotional moment.

“We’re a bit overwhelmed with the consideration, sympathy and effort involved at today’s tree planting ceremony in honour of our Dad, said son Seamus. “ We have to admit we were not prepared for it. It was only when people not fully familiar to us spoke so kindly about Da, did we realise that we too should have spoken and thanked all involved for the thoughtfulness they showed in memory of Dad.”

Paddy’s vast contribution to Mount Sion will be forever more remembered with ‘Faddy’s Tree’ in Mount Sion. As Afternoon Tea was served Nick McCarthy entertained everyone with some lovely music and song. After the event Paddy’s son Seamus sent this message;

“On behalf of Gerry, PJ, Noel, myself and our families, we thank you all for organising such an event and special thanks to Dad’s good friend Martin Quinn for his well pointed speech and to all the other guests who spoke so highly of our Dad. It was a fitting memorial and one we truly appreciate. Thank you to all at Mount Sion for a wonderful day,” added Seamus.