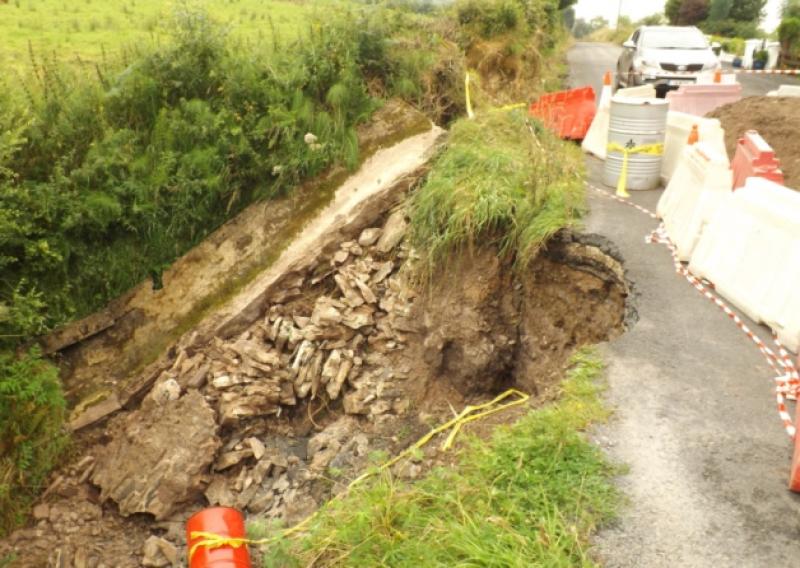 Catastrophic flooding in the Glengar area, on the Tipp-Limerick border, after recent “frightening” summer rains, will need to be addressed by the OPW, Cashel-Tipperary Municipal District Council has been told.

Catastrophic flooding in the Glengar area, on the Tipp-Limerick border, after recent “frightening” summer rains, will need to be addressed by the OPW, Cashel-Tipperary Municipal District Council has been told.

Water “like a tsunami” has left the area “like a wreck,” the council chairman described the aftermath of the flooding. Rushing water cut channels in the roadway and several bridges now need to be repaired.

Councillors heard that the cause of the flooding will have to be investigated and the task is greater than can be undertaken by the County Council alone.

Area Engineer Aidan Finn said he would be speaking to County Council engineers and the OPW to find the root cause of the flooding and resolve it. Most of the water had come overland and it’s outside of the remit of the County Council on its own.

Cllr Mary Hanna Hourigan said road surfaces had been washed away and it was unfortunate after all the money that had been spent in that area.

She added her thanks to the council staff who had worked tirelessly in the aftermath of the flooding.

Chairman John Crosse said the amount of damage was “unbelievable” but also paid tribute to the “top class work” of the council outdoor staff.

Mr Finn said previous council work in the area had been to try and protect the roads from surface water but now they have to find the source of the water coming down onto the road and that will involve the OPW.

Cllr Crosse said the area was now back in the state it had been after the bad weather of 2011. Even the graveyard and new community hall had been flooded. “No matter what kind of drainage is in place we don’t have the capability to take that kind of water, it was frightening and dangerous,” he referred to the torrential rain that had fallen.

Mr Finn said they needed to make sure the right job is done with an extensive report and detailed design.

Cllr Roger Kennedy described the “devastation” of the scene with a two to three feet wide, two to three feet deep” channel in the road from the water. “The outdoor staff took 150 tonnes of stones off one bridge,” he told the meeting. A number of bridges in the area now need to be repaired. “This is a catastrophe for the area, emergency funding needs to be accessed,” Cllr Kennedy said. “Hundreds of tonnes of grit washed through the valley and deposited on land,” he added.

People in the area were left without electricity or water for a time.

“I don’t know how much water fell but one man I know measured four inches of rain in two hours. I think it was double that in Glengar.”