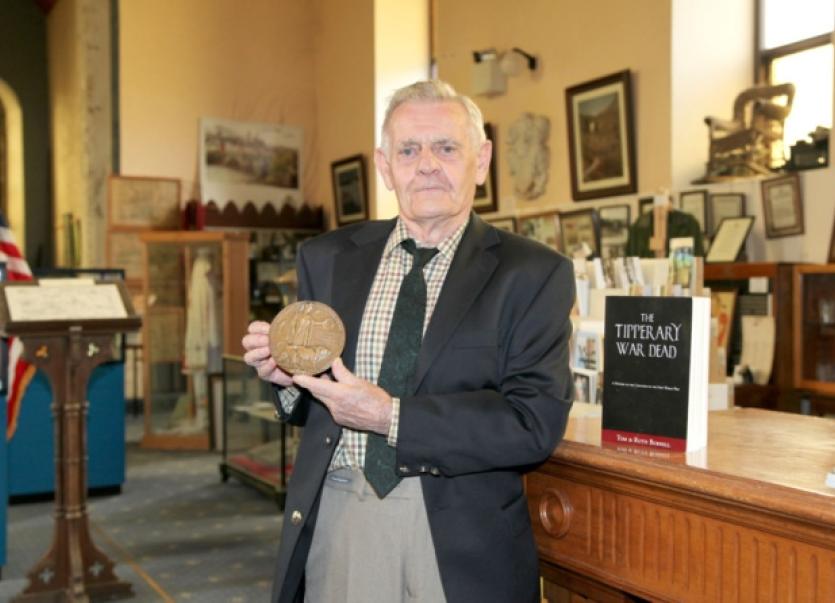 Forty year-old father-of-six Thomas McGowran was among hundreds of men from Carrick-on-Suir who fought in World War One, and his grandson has researched into his life and tragic death in the killing fields of Belgium so his family will remember his story.

Forty year-old father-of-six Thomas McGowran was among hundreds of men from Carrick-on-Suir who fought in World War One, and his grandson has researched into his life and tragic death in the killing fields of Belgium so his family will remember his story.

Retired electrician Eddie McGowran, aged 78, from 40 Ard Mhuire, Carrick-on-Suir is one of many Irish people prompted by the 100th anniversary commemorations of the Great War’s outbreak this year to find out about the life and fate of their relatives, who served in the British armed forces during the conflict.

And he has written an account of Thomas McGowran’s life so that his memory will live on in his family for future generations. It is based on his research of his grandfather’s war and industrial school records and stories his own father told him.

Eddie said he felt compelled to put down on paper an account of the life of the grandfather he never knew because he was a forgotten figure, whose sacrifice deserved to be remembered.

“He did his duty and did a lot more than most people. He went and fought for his country. I feel a kind of sadness about him and I feel I have a duty to do something in his memory.”

Thomas McGowran was actually a Dubliner, who spent his early childhood in dire poverty in a tenement slum in the city centre, according to Eddie. He was an orphan, who survived through begging on the streets and squated in a room with an old beggar woman. In 1889 at the age of 12, he was arrested for begging and committed to St Joseph’s Industrial School at Ferryhouse, Clonmel.

Eddie said St Joseph’s was a “godsend” for his grandfather from the life he had been used to on the streets. He went to school every day, learned to make boots in the workshop and worked on the school’s farm with horses, which he loved. He left St Joseph’s in 1892 after the school found him a place with Michael Conway shoemaker at Cook Lane, Carrick-on-Suir. He eventually married and settled down with a family in the Town Wall area of Carrick-on-Suir.

Eddie said his grandfather loved to be around horses and a visit to the town’s army barracks to collect boots for repair was always a treat as he would help the young soldiers with exercising their horses.

When the Great War broke out, Michael Conway lost his biggest customer after the army moved out of town to fight in Belgium and France. As the conflict dragged on work got scarcer for the town’s trades people and Mr Conway was forced to let go most of his workers. Eddie said his grandfather was the last to lose his job.

He continued to get some work from the business but it wasn’t enough to keep his family. In 1917, he decided to join the British Army’s Royal Irish Regiment as a private. He was 40 years-old but that didn’t matter to recruiters as all available men were wanted at this stage of the war. Eddie once met another Carrick Great War veteran Richard Power, who recounted to him how he and his grandfather had walked together to the railway station in Carrick-on-Suir to go to Belgium.

Eddie’s grandfather didn’t survive long at the front. In his letters home, he told his family the army needed men who could handle horses and he was assigned to driving horses pulling a supplies cart to and from a railway depot. He was pleased with this assignment and told his family the depot was some distance from the front. But he was later moved closer to the battlefield. In his last letter home, he recounted that he was part of a team delivering water to a field kitchen and makeshift hospital. A week later, his wife and children received a telegram from the War Office announcing the tragic news that he died in action on August 3, 1917.

Some of his grandfather’s treasured war medals were stolen some years ago at Waterloo Station in London. (Eddie lived and raised his family in England for 45 years before returning to his native Carrick to retire).

But the McGowran family still have a large war service medal with the inscription: “He died for freedom and honour” to remember him by. It is currently on display in Carrick-on-Suir Heritage Centre.

Editor’s note: Eddie McGowran sadly passed away since The Nationalist interviewed him about his grandfather. May he Rest in Peace.