Civil Partnership is a lesser institution say Roy and Tom 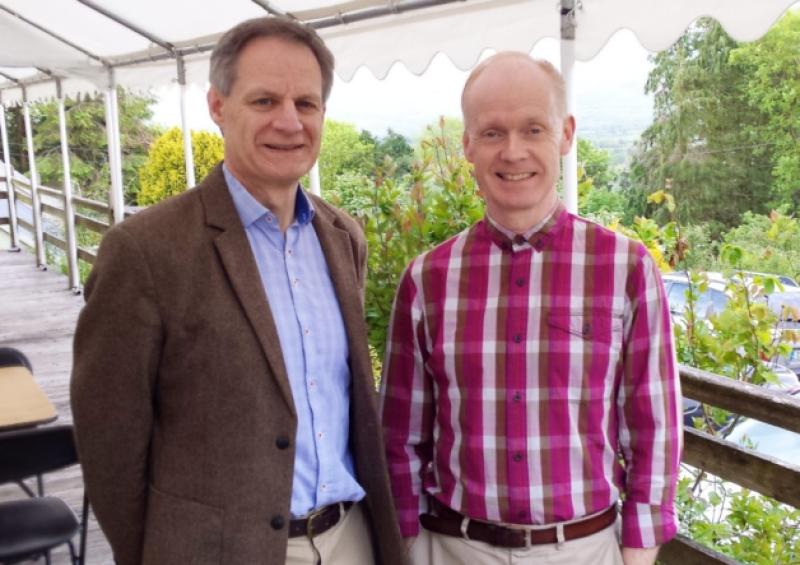 Roy Galvin, a director of the Aherlow/Kilross Community Council and former Chairperson of the Glen of Aherlow Fáilte Society, and his partner Tom Lysaght, lecturer in Computer Science at Maynooth University, are appealing for a Yes vote in the same-sex marriage referendum.

Roy Galvin, a director of the Aherlow/Kilross Community Council and former Chairperson of the Glen of Aherlow Fáilte Society, and his partner Tom Lysaght, lecturer in Computer Science at Maynooth University, are appealing for a Yes vote in the same-sex marriage referendum.

Why are we asking you for a Yes vote in the upcomming referendum on Marriage Equality. Why do we want Equal Marriage?

Well, first off, we (Roy Galvin and Tom Lysaght) believe that we should be treated equal in law to our own brothers and sisters, all who are married, their marriages being protected by the Constitution of the Irish State.

A year ago, after nearly 20 years together, we entered a Civil Partnership as the one and only option available to us to leagalising our relationship, but believing it to be a step towards eventual full civil marriage, which is what we both want.

To refer to us as ‘just partners’ does not describe our relationship correctly.

Our relationship is so much more than that and by not extending equal marriage rights to us, we feel we are are being discriminated against and being denied our fundamental human rights and equal treatment in the law with heterosexual people.

As a couple, we do not want to be viewed as different. It’s the law that makes us different.

Traveling the length and breadth of Ireland, as we frequently do, and arriving at pre booked B&Bs to “oh, I’m so sorry I have only a double room”, or on an other occasion being greeted by the man of the house speaking to his wife and hearing him explain with confusion, ”Mary, ‘this two fellas!”, illustrates, anecdotally, how the lack of marriage equality can still, for many Irish people, lead to an uncertainty as to how our partnership is defined or cherished.

We feel that Civil Partnership being a separate and lesser institution sends a clear message that we are not equally valued.

This exclusion of LGBT couples from marriage marks us out and it tells us, and others, that we are less. Finally, as we live in a Republic based on equality, then, no one is equal until everyone is equal.

As an aside, it was Roy Galvin who gave the Irish language community the word for gay - ‘aerach’- which is now extensively used by all print and television media, and appears in all newly published Irish language dictionaries.

Also, in 1993 he founded the G.A.A. (Gaeilgeoirí Aeracha Aontaithe) a conversation group for the Irish speaking LGBT community.