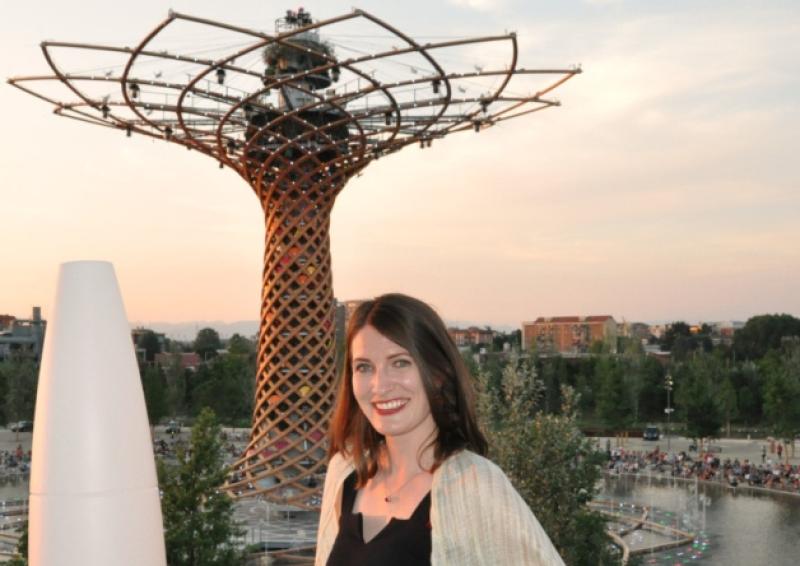 An Irish Defence Forces officer says she is “proud” to be involved in the management of Ireland’s national representation at Expo Milan 2015.

An Irish Defence Forces officer says she is “proud” to be involved in the management of Ireland’s national representation at Expo Milan 2015.

Capt. Rose-Anna White is fulfilling the role of Operations Manager of the Irish Pavilion at the global showcase, which began on May 1st and runs until October 31st.

The Carrick-on-Suir woman is surrounded by more than 140 participating countries exhibiting the best of their technology that offers a concrete answer to a vital need: being able to guarantee healthy, safe and sufficient food for everyone, while respecting the planet and its equilibrium.

Minister of State at the Department of Agriculture, Food and the Marine Tom Hayes TD recently accompanied President Higgins and his wife Sabina on a three day official visit to Italy, where the President officially opened Ireland’s National Day at Expo.

Speaking to South Tipp Today, Minister Hayes applauded Capt. White’s efforts in ensuring that Ireland is given a platform to exchange ideas and share solutions at the universal exhibition. “Capt. White’s work at Expo really highlights how able and capable Tipperary people are both at home and abroad. This is the best showcase for Ireland in relation to food, tourism and job creation that I have seen,” he said.

President Higgins said he was “delighted” to celebrate Ireland’s National Day at Expo, paying tribute to the Irish presence in Milan which icludes the past Scoil Mhuire Greenhill Secondary School student. In an address to invited guests at the occasion, he underlined the strong historical and cultural affinities, and the “deep tradition of friendship” that exists and continues to grow between the Irish and Italian people.

“It is apt that this national day takes place on Bloomsday, a date which is so significant in the Irish literary calendar, and a date which has forged a unique connection between Ireland and Italy. It was here in this beautiful country, one hundred years ago, that James Joyce began to write his literary masterpiece Ulysses when he was living in Trieste and Rome.

“The exchange of ideas and knowledge between our peoples, which has always been a fundamental element of our friendship over the centuries, continues today and is reflected in Ireland’s participation at Expo Milan 2015.  It is a source of great encouragement that, stemming from this deep and rich relationship, in modern times Ireland and Italy have built such a dynamic and mutually beneficial economic and trading relationships.

“I commend the large number of people who have worked tirelessly and creatively to construct and develop the Irish Pavilion”.

With Milan selected as the host city, Italy then chose Feeding the Planet, Energy for Life as its central theme. Expo Milan 2015 aims to address problems of nutrition and resources of our planet, opening up a dialogue between international players and exchanging views on these major challenges which impact everyone. In addition to the exhibitor nations, the Expo also involves international organisations, and expects to welcome over 20 million visitors to its 1.1 million square meters of exhibition area throughout the six-month period.

NUI Galway and Trinity College Dublin graduate Rose-Anna told South Tipp Today that she is using her 15 years’ experience in the Defence Forces to excel in her Expo role.

“My daily roles and responsibilities are varied and include facilities management, staff supervision, visitor liaison, event management and security and safety procedures. It is essential that the general public can view the Ireland Pavilion in a safe, informative and enjoyable environment which is of the upmost importance in order to fulfil their expectations of Expo Milan 2015.

“Each Pavilion provides a unique platform to experience other cultures and to get a taste of their national identity. From my experience with the Defence Forces abroad I am used to engaging with other cultures but not to the extent of the participants that are involved here. I find this engagement very worthwhile as I am learning every day,” Capt. White explained.

“A special cultural performance was organised by the Pavilion Cultural director Cormac De Barra which involved a musical and dance performace from Brú Ború.

“We have had performaces from some excellent cultural groups to date including Mr Roy Galvin based at Tigh Roy in the Glen of Aherlow and we have a lot to look forward to. We also envisage almost one million visitors will visit the Ireland Pavilion before Expo finishes based on current daily visitor numbers”.

She also offered some advice for those considering indulging in the cultural journey in Milan.

“It is certainly an opportunity not to be missed. Global Expos take place every five years only and Expo will be a long way from Tipperary when it comes around again.

“Comfortable footwear is essential because you will be on your feet all day visiting the wonderful Pavilions and exhibitions on offer,” she added.