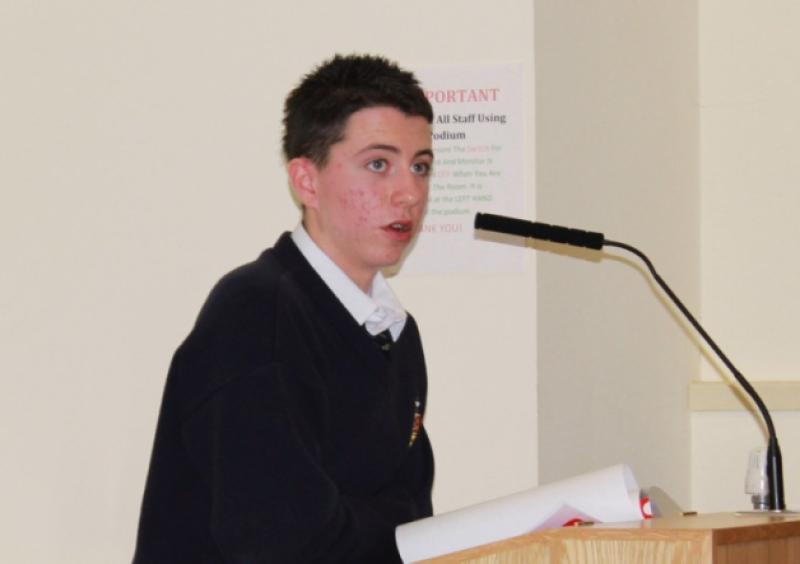 A brave young Rockwell College student has vowed to take his campaign to the Dail in order to improve services for teenagers who suffer acquired brain injuries.

A brave young Rockwell College student has vowed to take his campaign to the Dail in order to improve services for teenagers who suffer acquired brain injuries.

Conor Devlin (15) son of Michael and Catriona Devlin from Annacarthy suffered a serious brain injury as a result of a car accident on December 3rd 2012. Now fully recovered Conor is planning to use the anniversary of his accident to highlight the lack of services for young people between the ages of 13 and 17 in Ireland with a TV appearance and an address to Dail deputies.

Conor sustained his injuries when the family car was in collision with a tractor near Dundrum.

“I had two skull fractures one to my cheek bone and a fractured base of skull. I had a bleed at my cerebellum which is the balance centre of your pain. I also had a frontal lobe injury which affects your emotions and I had little bleeds all over my brain.I was on the critical list. As there is no neuro department in Clonmel it was decided that for fear of any brain swelling or bleeding that I was transferred to Cork ICU’’.

Conor said that his troubles only really surfaced when he tried to avail of services for people with acquired brain injuries.

“There are no such service available in Ireland for 13 to 17 year olds with acquired brain injuries,” he said.

His mother pleaded for help. Mary Heffernan from Aquired Brain Injury (ABI) in Cashel went beyond their remit and came to the rescue of the family.

“ Mary helped reassure my mum that all specialities were put in place for me, the psychology support I needed was in Tullamore this was arranged through ABI as there was none locally. Having the specialised care in place ensured that I only had to have 2 weeks assessment in the National rehabilitation centre in Dun Laoghaire’’.

Conor is now in Transition Year in Rockwell. “The lack of support for my age group has greatly upset me and I want to help do something about this.The earlier the specialist services are put in place the better the outcome. If this is the case why are they not in place for such a high risk group’’. ’.