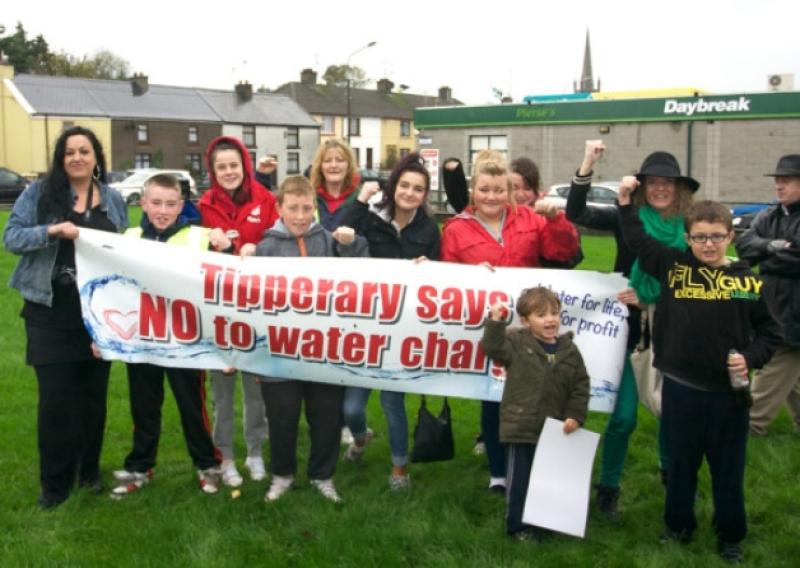 On one of the most miserable wet and windy days of Autumn so far, the crowd gathered around the bandstand at The Plan and Redmond Square at the top of the town and marched down the Limerick road and onto the Main street.

The banners read: “Ireland is Awake”, “Irish Water White Collar Crime”, “No Way We Won’t Pay” and “Tipperary Says No To Water Charges”.

The Tipperary citizens added their voice to the national water charges protest campaign coming out in big numbers .

Tipperary’s marching citizen’s chanted, “No Way We Won’t Pay” all the way through the town as passing vehicles honked their horns in agreement before settling between the two banks for rousing protest speeches from former councillor Jaqui Finnan, representatives of Sinn Finn, Independent TD Mattie McGrath and the citizens of Tipperary who took action and spoke out too.

Tony Black told the large crowd “People are sick and tired of getting hit every turn they take. You can’t get blood out of a stone they’re trying their best to get everything out of the people of Ireland and it’s time for us to make a stand and take back what is ours.”

Kieran Hickey said, “It defies all logic that a company can claim a bonus from a firm that hasn’t earned a euro to date with €10,200 car allowance per annum. I call that robbery because they are taking it from you and me to ferret their own nest and they don’t have our consent to do it.”

Kevin Bronnick from Cahir, “I’m here to support the people’s right to water and to stand for those who can’t afford to pay. It’s another stealth tax.”

Independent TD Mattie said “Young and old – it’s a huge message back to the government There is no need to set up Irish water.The County Councils dealt with the leaks and any problems,it’s just a cash cow for Irish Water. This was a rushed job for the Dail - it only got a 3-hour debate and the President signed this into law on Christmas day. What was the rush and what were they hiding? There was no mention in the legislation of PPS numbers, that was slipped in later, this is a con job from the start and as many people are saying- this is white-collar crime, obscene wages, bonuses and the entire charade.”