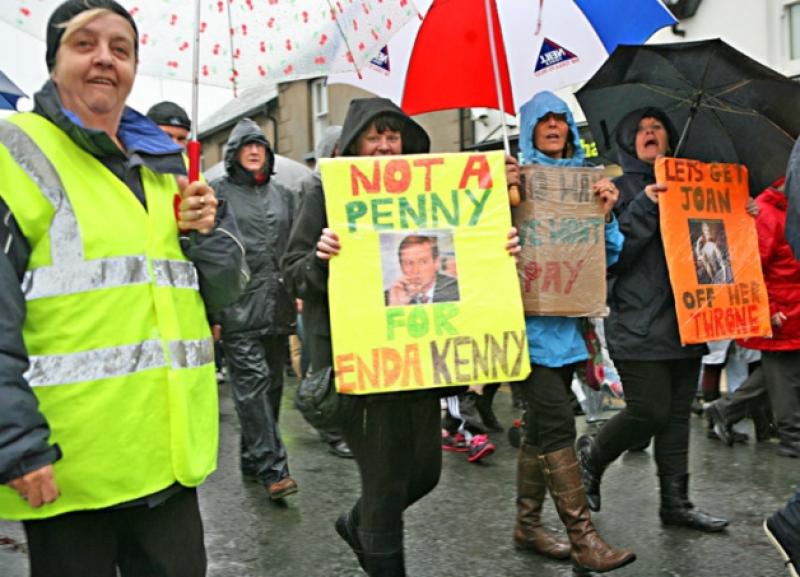 Rain pelted down incessently on the streets of Carrick-on-Suir last Saturday afternoon but it didn’t stop hundreds of people taking part in the town’s Right to Water March.

Rain pelted down incessently on the streets of Carrick-on-Suir last Saturday afternoon but it didn’t stop hundreds of people taking part in the town’s Right to Water March.

The anti-water charges demonstration was the biggest protest march witnessed in Carrick-on-Suir in years with the crowd stretching the length of New Street as it made its way to the finish point at the car park opposite the Town Hall.

Gardai estimated the attendance to be about 500 but organisers believe 1000 was a more accurate estimate of the turnout.

The demonstration, led by the Carrick-on-Suir Republican Flute Band, was attended by an array of representatives from left wing political groups opposed to the water charges ranging from Sinn Fein and Eirigi to the Workers & Unemployment Action Group and People Before Profit.

But the majority were ordinary people living in the town and surrounding communities such as Piltown, Ballyneale and Faugheen. Some protesters travelled from Clonmel.

The demonstration left from the Castle Field at 3pm and the marchers sheltered under a sea of umbrellas as they defied the bad weather to walk down Main Street through the West Gate, down Kickham Street onto the N24 and up New Street.

Many of the marchers carried homemade placards bearing slogans like “Not A Penny For Enda Kenny”, “United We Stand, No Water Charges” and “Revolt Against Irish Water And The Theft of Our Natural Resources by Private Corporations”.

Heading the march was a masked demonstrator dressed as the grim reaper carrying a sign warning the “End Was Nigh” for Irish Water.

At the post-march rally at New Street Car Park, the organisers thanked everyone for turning out inspite of the rain. They decided not to have any speeches due to the weather and instead the crowd sang “Only Our Rivers Run Free” led by Tony Fitzgerald and Amhrán na bhFiann.

Elaine Power of Carrick-on-Suir Right to Water Campaign, described the turnout to the march as brilliant considering the weather conditions. “It was an awful day just imagine what the crowd would have been if the day had been fine,” she said.

Ms Power said the local campaign planned to submit its anti-water charges petition of about 3000 names to Labour Senator Denis Landy and Environment Minister Alan Kelly at the end of the month.

Ann Condon of the Clonmel Against Water Charges Campaign, who is also involved in the Carrick campaign, said it was uplifting to see such a response.

“There were people there you think would never get involved in anything like this. This issue has really struck a chord. People don’t mind paying for their water but the quality of the water service isn’t that good and this is just double taxation.”