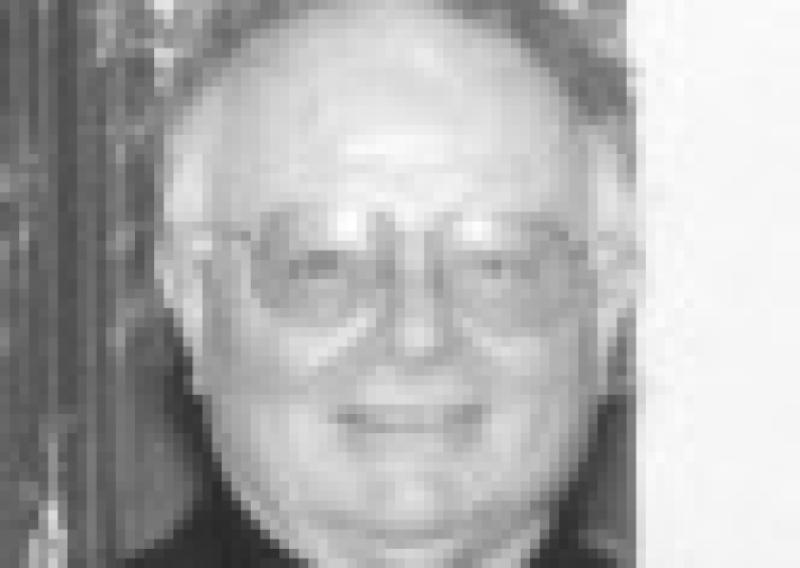 As word of the death of the Very Rev. James Feehan became known, there was widespread sadness and loss among the people of Boherlahan-Dualla, Ballinure and his beloved Thurles.

As word of the death of the Very Rev. James Feehan became known, there was widespread sadness and loss among the people of Boherlahan-Dualla, Ballinure and his beloved Thurles.

He had reached the fullness of years and was in the 65th year of his ordination.

Fr. James was a loyal and faithful servant of God. Although a native of Ballinure, he developed a great affinity to Dualla and Boherlahan during his early years. He, along with his family, attended church services in Dualla and he went to school in Ballytarsna where his father Tom was principal. His appointment as parish priest of Boherlahan Dualla in 1985 was a happy moment. To him, it was a return to his roots.

Fr. James was ordained in June 1950 at Maynooth for the archdiocese of Cashel and Emly but due to a surplus of priests, he opted to take up missionary work in the diocese of Wellington, New Zealand, where he spent six and a half years. In later times, he regaled his audiences with stories and vivid descriptions of his sojourn in far away lands.

While there, he made friendships that lasted throughout his life. On the occasion of his golden jubilee in 2000, friends from New Zealand travelled the long journey to be with him for the happy occasion.

He returned to the archdiocese in 1957 to take up a short appointment as chaplain to the Presentation Convent, Cashel, before being made diocesan inspector. His six years in this role gave him the opportunity of getting to know every inch of the archdiocese.

His friendly and good humoured disposition endeared him to both pupils and teachers. In 1964, he became a curate in the parish of Thurles where he remained for twenty-one years, the last three as administrator.

A staunch supporter of the GAA, he became involved with the Sarsfield’s Club and developed a deep bond and friendship with the Thurles Blues. While in Thurles, he cultivated his love of music and drama and in his retirement loved to relax by listening to his favourite classical music.

Coming to the rural parish of Boherlahan Dualla gave him the opportunity to develop a latent literary talent. As a renowned preacher, it was no surprise that his early books, Stories for Preachers and Preaching in Stories, dealt with the subject of priestly homilies. His near death experience during Christmas 1989, as a result of a road accident while fulfilling his priestly duties, provided him with much reflective time during his recuperation. It resulted in another book entitled Preaching Christ Crucified. His final book, An Hour Glass on the Run, was semi-autobiographical, giving the reader an insight into the life-journey of a priest in the second half of the twentieth century.

He was also a regular contributor to the Boherlahan Dualla Historical Journal and his series on ‘The Mannin Records’, the earliest known baptismal, marriage and death records in the archdiocese, provide a bridge between the family records of the seventeenth and nineteenth centuries.

Fr. James helped to immortalise Boherlahan Dualla through his regular Sunday Radio Masses with his vivid description of the location of the parish and his thought-provoking sermons, communicated with apt stories told in a light-hearted way. The numerous letters in the ensuing weeks were indicative of his ability to reach out to his listeners in a caring and down-to-earth manner.

Not too long after his arrival in Boherlahan Dualla, he was the principal organiser and motivator behind the bicentenary celebrations of the birth of Charles Bianconi. The people of the parish will never forget the Bianconi Ball at the Cashel King’s Motel with everybody in period dress and the grand parade of horse-drawn carriages from Longfield to Boherlahan.

The great community spirit generated by this event found expression again with the production of the Millennium Pageant. Fr. James depicted the role of local missionaries on this occasion and was taken aback by young sturdy prospective rugby players performing the ‘Haka’ for him.

Conscious of the importance of a good community spirit among his parishioners, he was willing to lend a hand and provide leadership whenever necessary. This was never more evident in the late 1980s when the Church Representative Body contemplated the demolition of St. John’s Church, Ardmayle. Through his influence, the church and grounds were transferred into Catholic ownership. The annual cemetery Masses in August and November were truly the work of his hands. Although retired from the parish in 2004, he never failed to return for these special occasions until ill-health prevented him from doing so.

Fr. James resided in Thurles during his years of retirement. He always kept himself busy and took on the ‘role’ of chaplain to the Presentation Convent. There was always a Ceád Míle Fáilte at his home and one was enriched by his presence. Although in his 91st year, he was able to stay in his own home until a short while before he died. This was a tribute to the wonderful carers who looked after his needs, often way beyond the call of duty. He died on Friday, 2nd January at Padre Pio Nursing Home, Holycross. His remains were removed to the Church of the Immaculate Conception, Boherlahan, on Sunday and burial took place in the church grounds on Monday following concelebrated Mass presided over by Archbishop Dermot Clifford. The dreary January afternoon and his fellow priests’ singing of ‘Salve Regina’ added to the poignancy of the occasion.

He is survived by his nephews Gerald and Seán, nieces Kathleen and Mary, relatives and a wide circle of friends. Thanks to Fr. James for his lifetime of dedication to the ministry of the priesthood. May the green sod of Boherlahan lie softly upon him and may his good deeds go before him in the sight of the Lord, whom he served faithfully.