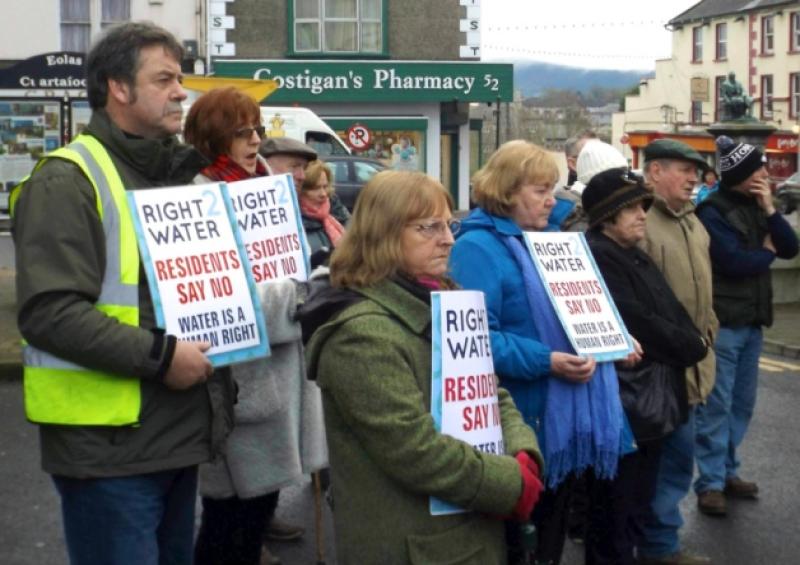 A second protest against water charges took place in Tipperary town at the beginning of January.

A second protest against water charges took place in Tipperary town at the beginning of January.

A large crowd of around eighty people from Tipperary, Thurles, Cashel, Cahir and surrounding areas gathered at the Plan on Redmond Square in Tipperary Town to voice their opposition to the installation of water meters around the country by Irish Water.

In very wintry conditions the protesters left The Plan and marched down the Main Street to the top of the Bansha road before returning to the Market Yard where a number of speakers addressed the crowd.

John O’Connor from Barronstown Cross gave a few words of encouragement to the crowd before introducing speakers Siobhán Walsh from Cashel, Sinn Féin Cllr. Martin Browne, Independent T.D. Seamus Healy and Mika Lange from Thurles. They spoke about supporting each other as a community, standing up for our rights and gave some very helpful information regarding water charges. All speakers pledged their support to the people of Tipperary Town in opposing the installation of water meters in the town and surrounding area.

The government is just not listening to the people and are so arrogant,” voiced Siobhán Walsh. “Thousands of people have marched across the country in the pouring rain and freezing cold. We don’t want concessions - we want the water charges abolished. The Irish people are not stupid. Yes they’ll give us the €100 concession and then we’ll owe them and by 2019 we will have bills coming in the door equivalent to our ESB bills.”

The crowd was smaller than the first march but Tony Black, who is part of the Tipperary Town No To Water Charges Protest Group, believes that the smaller crowd was due posters about the march disappearing. “We put up posters a couple of times to let people know about the march but someone kept tearing them down.”

New revisions were made on November 19, 2014 including: Caps on annual charges, a water conservation grant of €100 per year and the announcement that PPS numbers are now no longer required. The closing date for applications is February 2, 2015 with the first quarterly bills being issued from April 2015 in respect of January to March 2015. The proposed water service allowance of 30,000 litres per year has been abolished. Instead the charges are being capped and the rate of 1000 litres of water has been reduced from €4.88 to €3.70.

Tipperary Town Says No to Water Charges Committee would like to thank Mika Lange for leading the chants, Joe Dewan from Bansha & Kilmoyler Vintage Tractor Club for leading the march in his tractor, all the speakers and everyone who attended. The committee would like to invite anybody from the area who may be interested in helping out with the campaign to get in touch with us via our facebook page: Tipp Town Says No To Water Charges.