From Aherlow to Africa - an Irish Defence Forces officer’s story 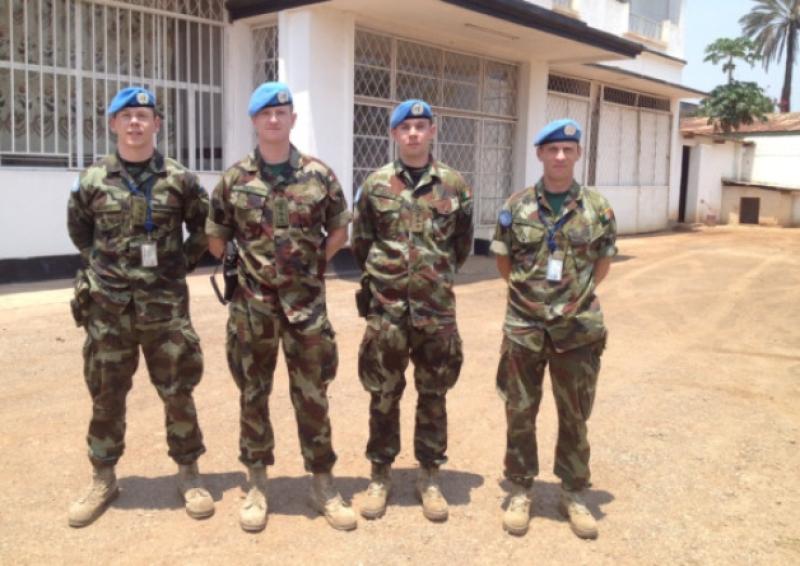 The Irish Defence Forces is widely regarded as a career less ordinary.

The Irish Defence Forces is widely regarded as a career less ordinary.

One becomes an integral part of an organisation where daily physical and mental challenges across many diverse fields are the norm.

Defence Forces personnel have presided over a number of peace support operations (mainly in the Middle East) since 1958, before becoming more predominantly present in many other parts of the world following the conclusion of the Cold War.

Comdt. Conor O’Shea, a native of the Glen of Aherlow, has recently returned home from a stint in Africa, where he was actively involved in the United Nations Organization Stabilization Mission in the Democratic Republic of the Congo (MONUSCO). Based in MONUSCO Force Headquarters in the town of Goma, Comdt. O’ Shea was positioned as a Military Staff Officer, engaging with surroundings vastly different to his inherent Tipperary background.

“The Congo trip was my fifth with the Defence Forces, having previously been to the Lebanon twice, Afghanistan and Chad,” Comdt. O’Shea explained.

“However, this was my first time being away from home since I got married, and I also have a young child, which brings with it many human challenges when abroad.”

Goma is a dusty border town which is steeped in rich history.

In 2002, a nearby volcano called Mount Nyiragongo erupted, killing 45 people in the first 24 hours alone and destroying 30 per cent of Goma.

“To this day Goma is still very basic in the sense that the roads are in extremely poor condition and water can come and go,” Comdt. O’Shea continued.

“We were three months without electricity. But the people are well used to the UN and foreigners, so from a security perspective I didn’t feel any way nervous during my stay.”

MONUSCO currently has a contingent of 19,815 military personnel, incorporating only four officers from the Defence Forces.

The 39-year-old said “difficulties” such as integrating one’s self into such a multi-national environment was challenging, but very rewarding.

“One issue for me was the language; they speak French with Swahili and a great deal of the people I worked with use French,” he added.

“Personally, I speak French which was useful, but I found that I improved my proficiency during the mission.

Located on the northern shore of Lake Kivu, Goma is in close proximity to the Rwandan city of Gisenyi.

Following the 1994 genocide in Rwanda and the formation of a new government in the country, some 1.2 million Rwandese Hutus – comprising elements who had taken part in the genocide – fled to the adjoining Kivu regions of eastern Democratic Republic of Congo (DRC), formerly Zaïre, an area occupied by ethnic Tutsis amongst others.

In 1996, a rebellion took place pitting the forces led by Laurent Désiré Kabila against the army of President Mobutu Sese Seko.

Kabila’s forces, assisted by Rwanda and Uganda, claimed the capital city of Kinshasa in 1997 and renamed the country the DRC.

Comdt. O’Shea, stationed in the Joint Operational Centre, was responsible for monitoring daily operations in both a military and civilian context. “From an operational perspective, it was essential to deal with any incident that happened there and then, gathering up all the relevant information and compiling a report for the UN headquarters in New York in order to keep them updated,” the former Aherlow GAA dual player noted.

But how do the locals view the workings of the mission today?

“I believe the mission would struggle in places to convince the locals that it’s doing the work it’s supposed to be doing,” Comdt. O’Shea said.

“On a daily basis, there are atrocities being committed out in rural parts of the Congo, and the locals look at the vast resources of the UN and question how these killings continue to happen.

“But it’s impossible to police a country the size of the Congo.”

Nonetheless, Comdt. O’Shea is confident that the Defence Forces will “retain their involvement in the Congo for the foreseeable future” and hails his completion of the mission as a “significant achievement” in his career. The four Irish officers were also very “fortunate” to visit the area home to the tragic Niemba Ambush, which took place in November 1960, when nine of an 11-man Irish patrol were slaughtered by Baluba tribesmen.

This was followed by visits to the locations where the Siege of Jadotville took centre stage in 1961.

Irish military personnel had been ordered to protect the local population from the Katangan militia and mercenaries, but sustained casualties in the process. “Being one of the only Irish people to have been back to these watershed locations topped off a very enjoyable and worthwhile experience,” he concluded.