Clonmel Town praised for promotion of soccer on its 50th birthday 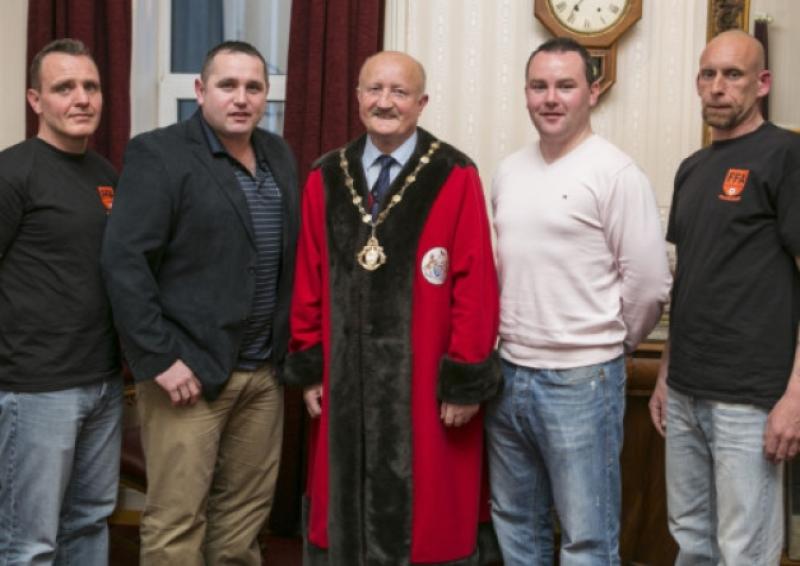 Clonmel Town Football Club has been praised for all its work over the last half century to promote and develop soccer in the town.

Clonmel Town Football Club has been praised for all its work over the last half century to promote and develop soccer in the town.

The tribute was paid by the townâ€™s first citizen, Cllr. Billy Shoer, when the club was accorded a Mayoral reception as part of its 50th anniversary celebrations.

â€œSoccer has been a major sport in Clonmel since the turn of the last century, with various clubs representing the town down through the years.

But it was only when the club was formed on 23rd April 1963, and adopted the name Bohemians Clonmel that the townpeople recognised and accepted the new club as the prime soccer team representing Clonmelâ€, the Mayor stated.

He described it as a privilege and honour to host the reception for a club that had been so successful through the years.

â€œAs Clonmel Bohemians you went on to win the Tipperary League. From 1966 onwards the club competed successfully in the Waterford League and in 1968 won the Munster Junior Cup. 1973 saw the club move into senior football and thatâ€™s another milestone in its history.

In 1976 the committee and club members decided to change the name to Clonmel Town FC in order to promote a greater affinity with the town and today the club is fondly referred to as â€˜Townâ€™. The people of Clonmel have always taken a great interest in Townâ€™s success story and have travelled to support you up and down the country, sharing in your victories and losses alike. I pay tribute to those loyal fans tonightâ€.

The Mayor said that the clubâ€™s roll of honour down through the years was very impressive. Town had won the FAI Junior Cup in 1994 and the Munster Junior Cup on three occasions - 1968, 1986 and 2006. They were Munster Senior League and Cup runners-up in 1982 and lifted the Tipperary (TSDL) Premier League title 16 times between 1984 and 2011, as well as winning the Tipperary Cup 13 times between 1984 and 2008.â€¨â€œThe move from The Showgrounds to the Cashel Road Complex in the early 80s gave you a permanent home to develop the main pitch, as well as adding all- weather pitches and modernising your facilities. For far too long players togged out in the back of cars and in sheds and itâ€™s great to see the comforts visiting teams enjoy today, nothing but the best. However most importantly this new ground gave you the opportunity to develop your youth and underage teams, which is the future of any clubâ€.

Success at underage level included winning the Munster Youth Cup in 2010; the TSDL Youth Division 1 title 10 times between 1981 and 2013; nine Tipperary Youth Cups between 1980 and 2012; and 3 Joe Delaney Youths Cups.

In 2005/2006 the Danone U-11 team won the national competition and represented Ireland in the European Championships in France.

â€œWe in Clonmel are all very proud of those who put on the club jersey and the green shirt of Ireland, as well as those who played with FAI Senior clubs. All of you have put Clonmel on the map for all the right reasons and have never forgotten the club motto â€˜Respect All, Fear Noneâ€™.

A club is not just made up on how successful it is on the pitch, but how well you build and develop every strand in the club, and while there will always ups and downs it is the good foundation and structure and team work that can be handed onto the next generation that will see the club grow over the next 50 yearsâ€.

The Mayor also mentioned all the organising and voluntary work undertaken in a club could sometimes be forgotten and taken for granted. This included the work of committee members, groundsmen, ladies committee, coaches at all grades, caretakers, Lotto sellers and supporters.

â€œThe club would grind to a halt without good volunteers giving their time freely year on year. And here tonight are two young men, Chris Boyle and Kieran Kennedy, who have started up football through the FAI for people with disabilities between the ages of 6 to 14 - thatâ€™s a great that shows Clonmel Town is willing to open the club to all in society to see the ability, not the disabilityâ€.

Cllr. Shoer made special mention to Michael Maher and The Local Bar for their long-term sponsorship.

â€œMy fondest memory is of the late Martin Dunne and Johnny â€œChapeâ€ Ryan calling on the players to â€˜mind the houseâ€™, the Mayor added.

The other members of Clonmel Borough Council also joined in the tributes.