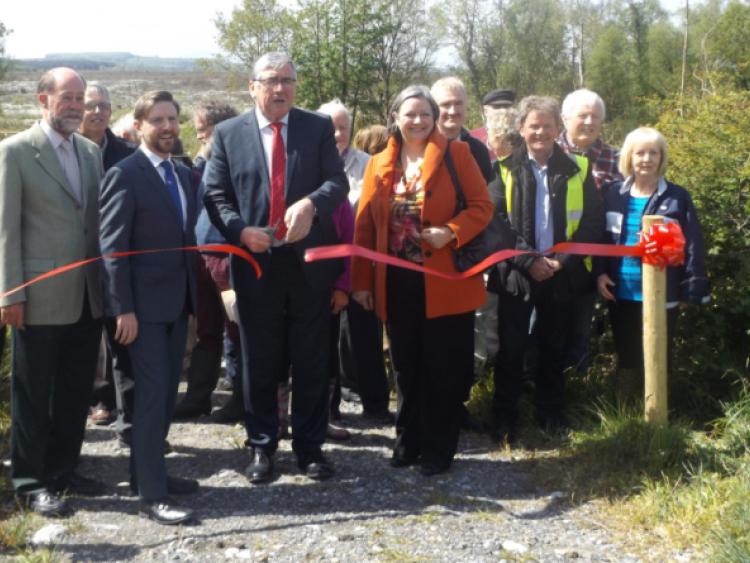 The importance of Scohoboy Bog was highlighted by Junior Minister for Agriculture Tom Hayes when he officially opened its conservation project near Cloughjordan.

The importance of Scohoboy Bog was highlighted by Junior Minister for Agriculture Tom Hayes when he officially opened its conservation project near Cloughjordan.

The project is a nature conservation project jointly funded by EU DG-Environment, the Department of Arts, Heritage and the Gaeltacht and Coillte under the EU LIFE-Nature Programme. Cloughjordan Community Development Committee is the local community partners in the project.

“This project is a very positive initiative which will contribute greatly to the preservation of Ireland’s valued bog habitats and the safeguarding of our natural heritage and biodiversity.

“Not only is this an important site from a scientific and environmental perspective, it is also a stunning amenity which is open to the public and I would encourage the people of Tipperary to take advantage of such a beautiful amenity on their doorstep,” said Deputy Hayes.

Gearoid O Foighil, chair of Cloughjordan Community Development Committee and the project’s community co-ordinator, praised the Coillte project staff for the quality of their support and engagement with the local community.

“Scohaboy is the second local project the community has been involved in with Coillte Forest, the first being the Knockanacree Community Woodlands Project. Both projects are excellent examples of how a local community group and a semi-State company can collaborate and work together to develop natural heritage assets that can be enjoyed by locals and visitors alike. A project such as Scohaboy contributes to the health and wellbeing of the community. The quality of this community engagement was recognised with Cloughjordan Tidy Towns group winning the 2014 Notice Nature National Biodiversity Special Award for their involvement with the project,” he said.

Dr Ciarán Fallon, director of stewardship and public goods at Coillte said: “These sites are of international ecological importance and Coillte is really proud to have led their restoration. These rewetted bogs will become a habitat for rare species of plants and animals and a sink for atmospheric carbon. Rehabilitating them increases biodiversity and helps combat climate change.”

What makes a bog like Scohaboy so rare is the fact that it still has a substantial area of active raised bog where the conditions are right for peat to continue to form and where the typical species of plants and animals can thrive. The bog was declared a National Heritage area in 2005 and is expected to be upgraded to Special Area of Conservation.