Review: Seinn concert in Cathedral of the Assumption was an outstanding success 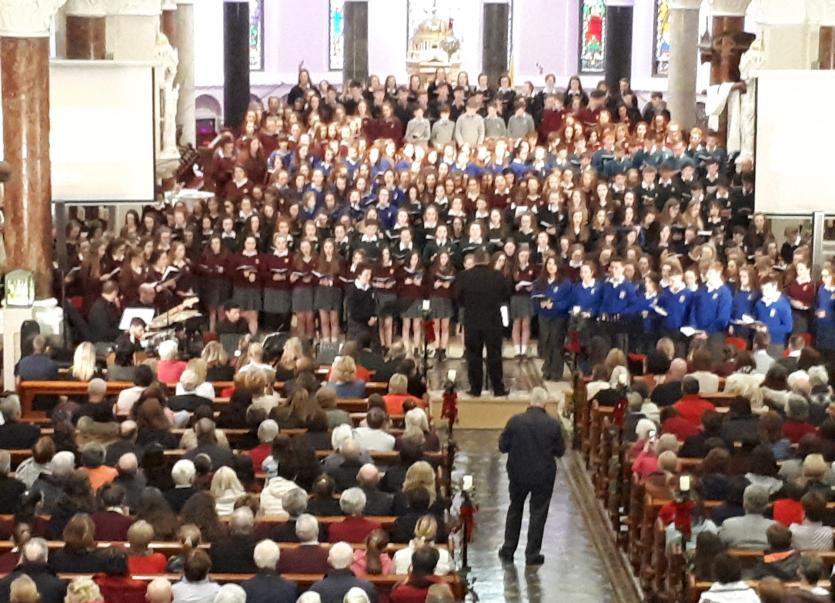 The teenagers performing in Thurles

Watch: a video of the 600 teenagers performing in the historic concert in Thurles.

If that be the case, Heaven was indeed stormed from the Cathedral of the Assumption in Thurles last night (Thursday) when 600 students from ten secondary schools across the Archdiocese of Cashel and Emly  gave a wonderfully uplifting and up-beat performance of liturgical music under the guidance of Ian Callanan.

Historic this event certainly was - it is thought to have been the first ever concert in the famous Cathedral of the Assumption - that it was performed by teenagers in such excellent fashion was entirely appropriate. It was also the first time that the concert was performed in the Archdiocese of Cashel and Emly and such was the amazing success of it, a repeat performance is on the cards next year.

"I cannot but be in awe of the performance of our students. They only came together for the first time this morning and only got to rehearse for the first time in the Cathedral this afternoon," said a thrilled Archbishop Kieran O'Reilly, Archbishop of Cashel and Emly after the event had concluded.

Archbishop O'Reilly had supported the initiative from the beginning and was instrumental in bringing Ian Callanan on board to work with local ladies Deirdre Lanigan and Trisha McElgunn, and Rev Fr Martin Hayes, ADM Thurles Cathedral parish.

The atmosphere of celebration in the Cathedral was unique - this was a celebration of music, of talent, of selfless giving, and of the youth of Tipperary. For those involved, it was an incredible experience and the buzz around afterwards was evidence of this.

"I have been to many ceremonies and events in the Cathedral, but not quite like this," said one priest afterwards.

Another comment: "We have just witnessed a miracle. To see 600 hundred teenagers in our Cathedral performing together like that having just met this afternoon for the first time, is absolutely incredible. We were privileged to have been here."

"They brought so much energy and vibrancy to the Church. It would be a shame not to continue this in the next few years," said a third.

It took months to prepare for this concert and within an hour of it ending the Cathedral was back to it's normal self in time for early morning Mass, thanks to much help from those who attended.

Seinn it was. And, shine they certainly did.