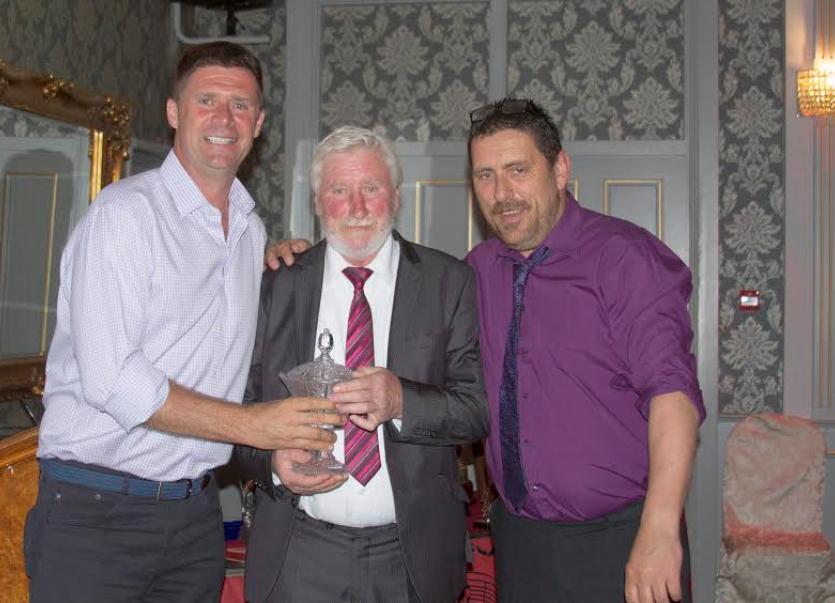 Fifty years of soccer in the Cathedral Town is celebrated in great style at The Anner Hotel.

Peake Villa FC has enjoyed an outstanding season on the field of play and on Sunday evening last in The Anner Hotel, they hosted an outstanding celebration of fifty years of football in The Cathedral Town with a fantastic dinner dance.
In excess of 200 people attended, drawn from the five decades of players, mentors, supporters and of course, three founder members, John Walsh, Matthew Ryan and Willie Moloney. 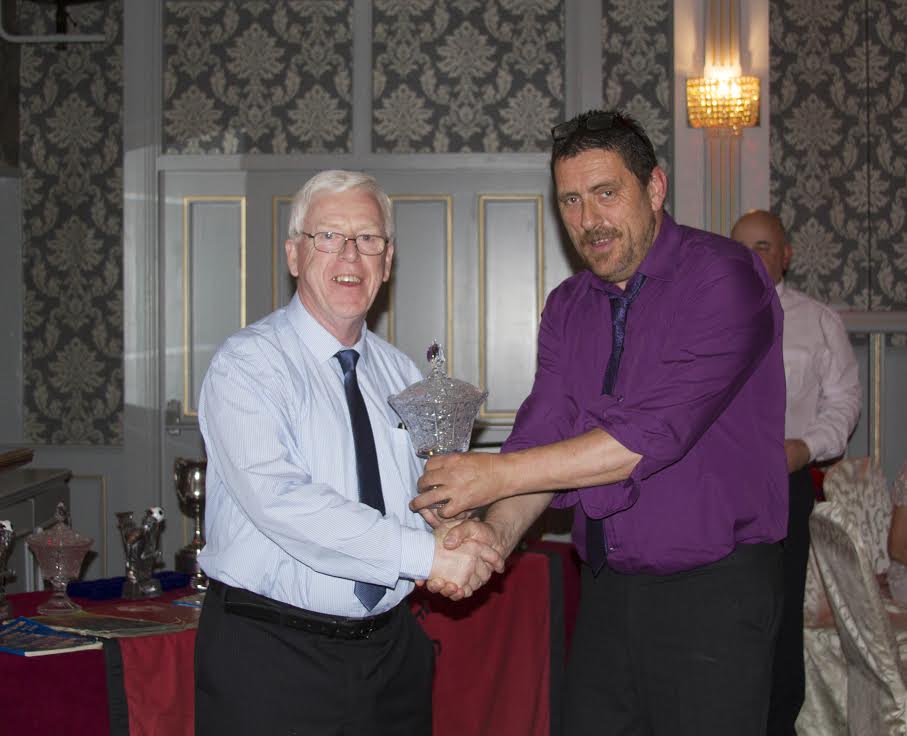 From a tiny acorn planted half a century ago, a great oak tree has grown and the facilities now enjoyed by the players of Peake Villa are second to none. It is a most celebrated club which is going from strength to strength, a fact noted by special guest, former Irish soccer international Niall, Quinn when he addressed the attendance.
Chairman Seamus welcomed everyone to the celebration and gave acknowledgement to the four founder members and trustees over the years who provided personal guarantees to enable Peake Villa to purchase and build what it has today at the Tower Grounds. He also paid tribute to Rev. Martin Hayes and the parish of Thurles which has been strong supporters of the club’s lotto at the Wednesday night bingo which provides the much-needed funds to keep the club operating.
The club committee members, coaches and players past and present, without whom the club would not survive, were also thanked. The Junior A team and the Junior B team were in attendance and received a round of applause for their efforts and success on the field of play in the 2016-2017 season.
Finally Seamus thanked the many sponsors who continue to support the club in its efforts to provide a platform for football for all ages in the town for both boys and girls. This success is borne out by the great run in the FAI junior Cup by the A team, the Division and Cup League double by the B team, the u16 Boys finishing runners up in the cup, the u15 boys winning the cup, the u12 Girls winning the Cup and league runners up, and the Boys u14 and U12 are still in the running for cup success.
He concluded by thanking all the people in attendance -there were many faces from past Peake Villa teams as well as mentors and coaches who had worked so hard to ensure that the club progressed.And, the evening proved to be a very entertaining social event for them all as they recalled many great tales and stories from their days on, and off, the field.
Damien Byrne and Kevin Cummins proved to be excellent MC's for the night and they worked in partnership very well together to keep the speeches and presentations running smoothly and on schedule for the night.
There were presentations to: Marian Walsh for her outstanding service behind the scenes to Peake Villa FC, as well as to the three founding members who were in attendance on the night- John Walsh, Matthew Ryan and Willie Moloney received special trophies to honour their long term service to Peake Villa FC.
John Walsh spoke with great aplomb telling a number of tales of the incidents down through the years when they first started soccer way back in 1967 and the running confrontations with ‘The BAN’ and objections to the foreign game been played in Thurles. They ploughed on though and the celebration now of 50 years of soccer in the Thurles community is regarded as a massive achievement. 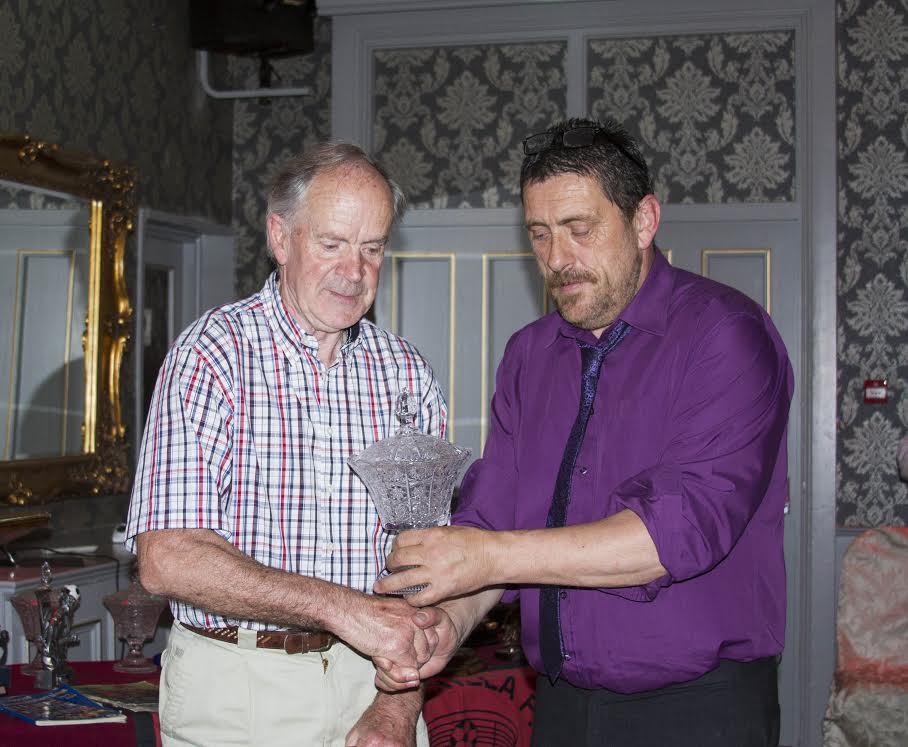 Willie Moloney, another founding member, is presented with a memento by Seamus Woodlock.

Special guest Niall Quinn was greeted by the crowd and he received a standing ovation as he entered the hall before he presented the Junior B team awards. The Young Player of the Year went to Ronan McGuire (scorer of 59 goals this season)
The Player’s Player of the Year was Tommy McGuire while the Player of the Year prize went to Ronan McGuire
Niall also presented the Junior A team awards with the Young Player of the Year going to Matthew McKevitt with the Player’s Player of the Year was Pippy Caroll. The Player of the Year was Sean Wade.
Niall presented the Junior B team with their League Winning Medals and then John and Marion Walsh presented Niall with a picture of jim with his uncle when they attended the club’s 30th celebration.
For outstanding service to Peake Villa for over 35 years and for his running of the club’s lotto the club presented a surprise presentation to Michael Brett who received a standing ovation.
Earlier in the day Tomas Bourke and Nigel Condron attended the Aviva stadium to be presented with a cheque of €1,500 which Niall formally pesented to Seamus Woodlock. The club is now in the last eight for the FAI Club of the year which will be decided at the FAI AGM taking place in Kilkenny in August.
Niall regaled the audience with tales of his call up to the Irish team, his love of Thurles whicht became his second home as he spent many days of his childhood in the town. He recalled Thurles Town FC who played in the Irish Senior League and were the combination of Thurles Town and Peake Villa FC. He mentioned many players that had gone on to play premier league soccer who had played for Thurles Town. He recalled a number of incidents during his time with the Irish team and the manager big Jack. He spoke from the heart as he congratulated the Peake Villa Junior teams on their success this year and wished the club every success in the future.
It was a thoroughly enjoyable evening and a fitting way to celebrate fifty years. Of course winning Club of the Year would really crown it so best of luck to all in Peake Villa. Fingers crossed.