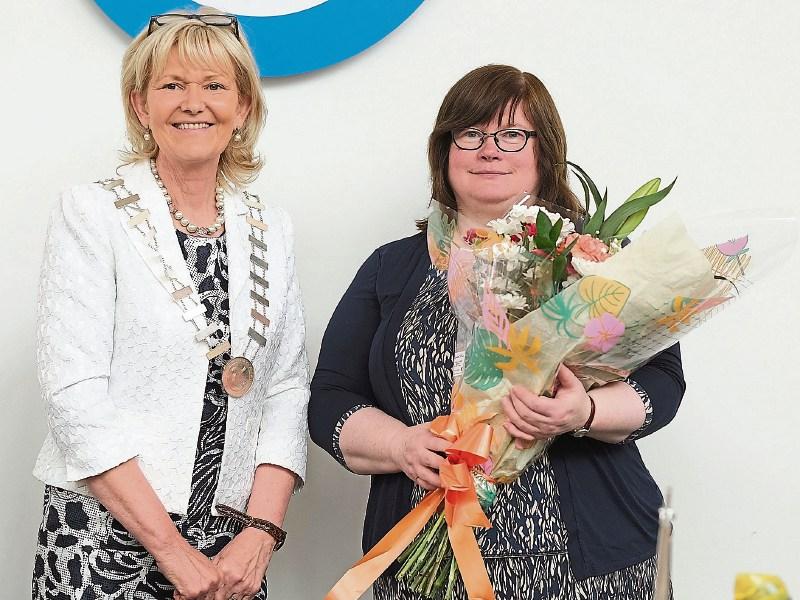 Nenagh MDC councillors have paid tribute to Cllr Phyll Bugler following her term as Cathaoirleach of the district council.

Cllr Bugler stepped down along with her leas-Chathaoirleach, Cllr Michael O'Meara at the MDC annual general meeting this month.

Leading the tributes, Cllr Seamus Morris said Cllr Bugler should be “proud” of what she had achieved, describing her as the “captain” of the ship.

He said that many would not realise that Cllr Bugler, apart from her council work, had helped “hudreds of students doing the Leaving Certificate over the years, and I thnak you, as a father of one such student”.

Cllr O'Meara said the MDC meetings had been successful. “You have been a terrific chair and we also had a bit of craic”.

Cllr Mattie Ryan said Cllr Bugler had been a “great chair” and Tipperary County Council was working together at MDC level.

The Fine Gael councillor was also congratulated on her term in office by Cllr Joe Hannigan, Cllr Hughie McGrath and Cllr John Carroll, who described her as a “fair and excellent chair”.

Cllr Bugler listed among her highlihts, the progress on the €40m Shannon crossing at Ballina / Killaoe, the development of Newport town park, attending many festivals and events such as Terryglass and Visit Nenagh, the People's Picnic at Nenagh castle, travelling to Belfast to commemorate Nenagh native Fr Alex Reid, opening the National Optimist Sailing championships at Dromineer and hosting a soccer team from Palestine and meeting the various successful Tidy Towns committees.

Cllr Bugler had a special word of thanks for district administrator Rosemary Joyce, who she described as her “backbone”.