Tipperary to develop a 'more formal friendship agreement' with China 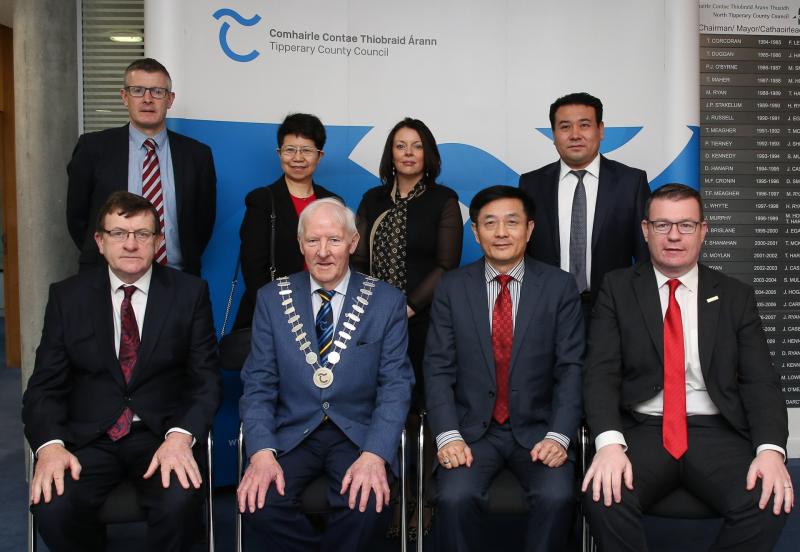 Tipperary County Council will explore the potential for economic and tourism cooperation between Liaoning Province, China, and Tipperary following a positive meeting held with the Chinese Ambassador to Ireland.

Its aims include expanding and building upon existing economic relations within the county, along with seeking to develop further opportunities in the areas of agriculture, education, energy and tourism.

The Chinese Ambassador to Ireland His Excellency Dr Yue XiaoYong paid a visit to Nenagh on February 19. The first secretary of culture Oujia Wang and liaison person Dr Yupeng Liu had requested a meeting with Tipperary County Council cathaoirleach Cllr Mattie Ryan to discuss future potential benefits between Tipperary and the Liaoning Province. Deputy Alan Kelly was also in attendance.

The meeting afforded an opportunity to showcase Tipperary and the opportunities for growth and investment in the areas of economic development, agriculture and energy. Cllr Mattie Ryan welcomed the distinguished guests to Tipperary and thanked them for the interest they expressed in the county. He stated that he would welcome the opportunity to forge economic, cultural and tourism links with the Liaoning Province, owing to the existing business links already in place. He also noted that over 60% of the current Chinese population within Ireland originated from the Liaoning Province.

Nenagh Municipal District director Marcus O’Connor spoke about the central location of Tipperary within Ireland from which to operate business, with key arterial routes linking all major cities and airports. He gave examples of the strong track record of the local authority working with the business community to develop projects in Tipperary such as the Hydro Electric Project at Silvermines and the bioeconomy campus at Lisheen Mines.

The tourism potential of Tipperary and developing direct links with the Liaoning Province were also discussed.

The ambassador thanked the cathaoirleach and district director for the courtesy shown to him and stressed the importance of developing further relations between China and Tipperary.

The cathaoirleach concluded the meeting by making a presentation to His Excellency Dr Yue XiaoYong and by saying that Tipperary is looking forward to developing further connections between with China, aimed at learning more about it's diverse cultures and traditions with a view to developing a more formal friendship agreement.