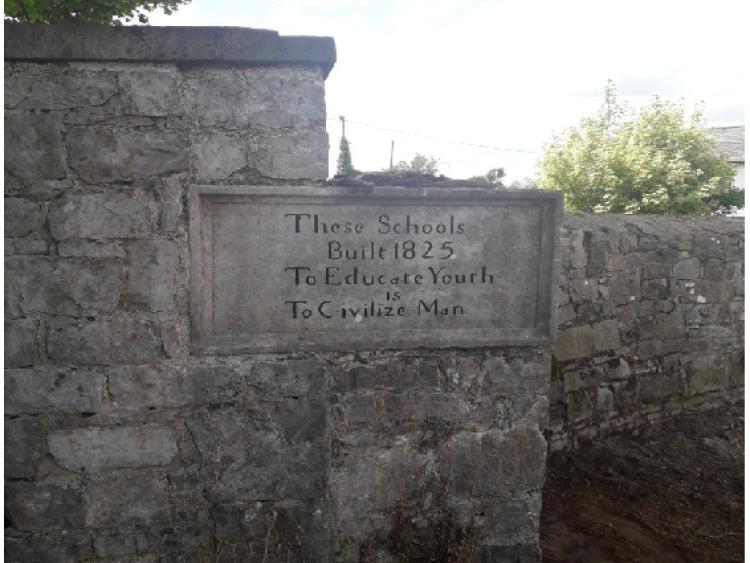 The plaque at Holycross which was revealed recently

“When life gives you stones? Build a wall.”
The people of Holycross were delighted to see the completion of remedial work which took place over the last number of months on the boundary walls of St Marys Church Holycross which is the old Church of Ireland chapel on the site of what is believed to be the old parish church in Holycross, dating to circa 1581.

However, over the last number of years the boundary walls suffered from all the most common problems associated with old walls and early this year a number of the walls fell in to disrepair. It thus fell on the Holycross Tidy Village group to set about repair work.

Under the leadership of Richard Quinn, Director of RQ Stonemasonry and his outstanding team, extensive repair and conservation measures were undertaken to the damaged external wall fabric. It was during this restoration work that an old plaque was discovered near the entrance gate which had been hidden under dense foliage for many years. This plaque dated back to 1825 indicting that a school was situated within the curtilage of the church.

Richard painstakingly restored the plaque and it now can be viewed by all, giving another insight into the rich local heritage of the parish.
The plaque stated ‘’These Schools Built 1825: To educate Youth is to Civilize Man’’ still ring through today.
According to the Project Leader, Claire Ryan O Keeffe ‘’the importance of heritage conservation cannot be overstated. Beyond the written word, stone is one of the most enduring arts of human culture so as a society it is incumbent on us to restore and save our heritage as it is part of who we are ‘’.

It was pointed out by Cllr Lowry that: ‘’It is by communities coming together to support and share resources that valuable work like this can be under taken’’.
It is hope over the coming months that further work will be undertaken to the Church to ensure it lives on to remind us of a by- gone era.