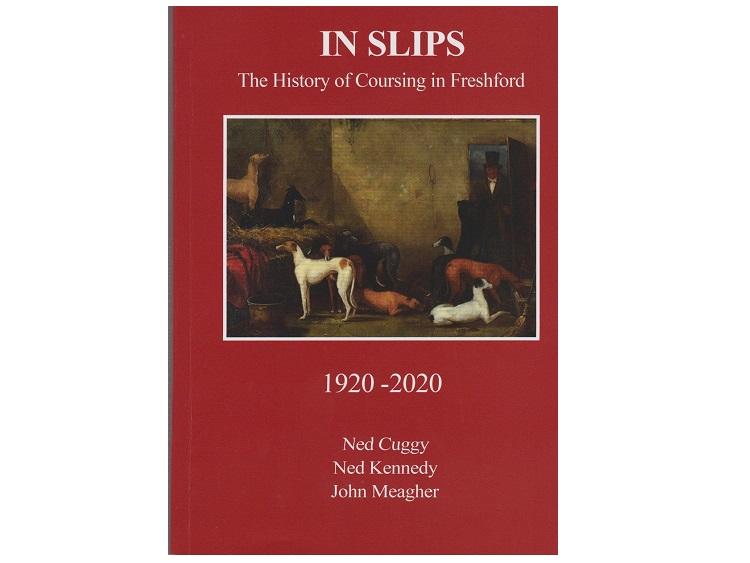 In Slips - The History of Coursing in Freshford

A new addition to Freshford’s recorded history was launched last weekend with the publication of IN SLIPS. It was published by Freshford Coursing Club to mark its centenary. The club was formed on February 9, 1920.
There are over 320 pages in the book with photographs, results, a list of club officials and a record of the different venues in the parish where coursing was staged. One chapter records the development of coursing in north Kilkenny since 1845. Another recalls the famous dogs with Freshford connections who reached Powerstown and Clounanna over the century. There are over 350 photographs including many of the founding committee. The first president was Canon Tobias Rossiter Walsh, P.P. of Freshford. There were joint secretaries for a number of years. The founding pair was Michael Wall and Edward Kennedy. The founding treasurer was John Grace of Cascade House. All three have descendants living in Freshford today.
The cover of the book has a photograph of a painting by Freshford-born artist Edmund Fitzpatrick. Also included is a photograph of a Fitzpatrick illustration depicting the story of “The White Hare” from a novel by William Carlton published in 1860.
Songs and poems are not forgotten with “Where did all young hunters go?” (Jerh Cuggy), “The North Kilkenny Hunt” (John Dermody) and “The Ballad of Long Acre” (Pat Vaughan and Sean Doherty) included. A memorable newspaper article from the “Cork Holly Bough 1963” recounts the career of the famed Dick Ryan of Gooldscross. The last page in the book has a well-known quote from Dick worthy of being included in any coursing history.
The files of the local newspapers, Kilkenny Journal, Kilkenny Moderator and Kilkenny People, provided most of the material for the book in addition to the library at The Sporting Press. The club thanks the officials at the libraries at Rothe House, Kilkenny Co. Library and at the Sporting Press for facilitating study of the files.
The book was compiled for the club by Ned Cuggy, Ned Kennedy and John Meagher. It costs €20.
Supporters are encouraged to buy a copy early as it is a limited edition which will not be repeated.
There is a long connection between Freshford and many coursing supporters around Tipperary. The late Dick Ryan of Gooldscross has a chapter all to himself in the book which Tipperary people will find of interest