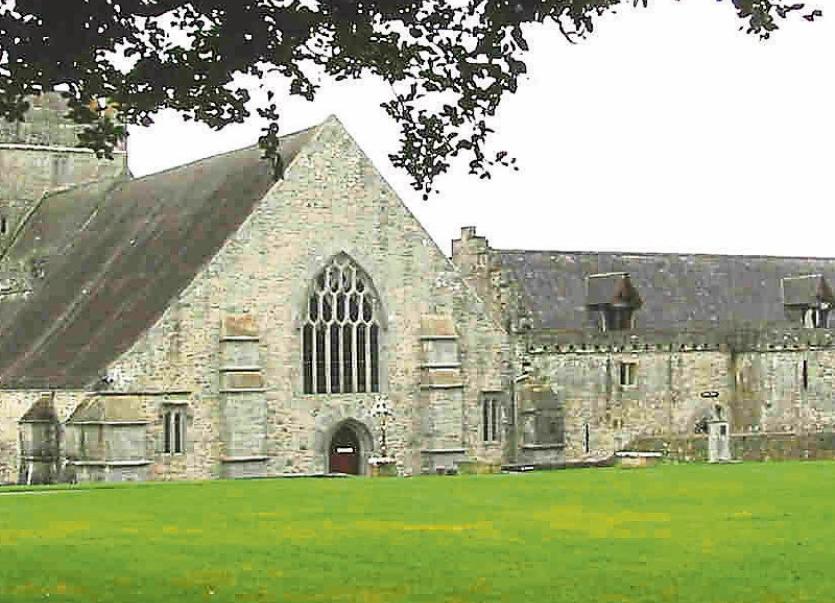 There was widespread regret and sadness this week in Holycross and much further afield following news of the passing of one of lifes gentlemen, the late Ned Bourke of The Green, Holycross.

Ned was a quiet unassuming man whose many talents were put to so much good use down through the years. But, it is perhaps as a TV installer, sales and repair man that he was best known having worked in Thurles for many years before establishing his own business in Tipperary town. His knowledge of the field ensured that he was the go-to man for so many households when the TV or video was 'on the blink' and even after he had retired from the business, he was still the first to call for people in trouble.

A native of Clareen, Ballycahill, Ned could turn his hand to any task and was gifted. He had a great brain and would take his time to work out problems before coming up with solution and then carrying out the work - his son David alluded to this at the end of Requiem Mass in Holycross Abbey on Thursday when he said that the DIY go-to man would be very sorely missed whenever an issue would arise.

But it wasn't just Ned's ability to fix, repair and renew which made him so invaluable to so many - it was his way with people. He was always quiet, courteous, inoffensive and totally fair with his customers, all of whom regarded him as a friend as well.
Husband to Nora, and father to David, Declan, Eamon, Adrian and Caroline, Ned Bourke was a man who was never afraid to put his hand up and offer his service and assistance. He was involved in various capacities with Holycross Ballycahill GAA club - his work before and after preparing St Michael's GAA grounds for the annual Cut Loose festival immediately springs to mind. Ned, and his family, would spend hours ensuring that different aspects were up to scratch and he would not return home until he was satisfied that the work had been done in an efficient, safe and appropriate manner.

He was also very selfless when it came to the annual Sale of Work in Holycross Ballycahill - the proceeds of which go towards the two primary schools in the parish and for the up-keep of the community centres. He recognised the value in fostering a healthy community spirit and he was never found wanting when it came to putting his shoulder to the wheel.

Nora and Ned were blessed with a wonderful family and it was appropriate that his sons, daughter and the extended family were on hand to look after him in his final months, weeks and days. He had stoicly battled motor neurone disease and continued his life with as much normality as he could muster until the effects of the condition began to take a serious hold of his body. Still, he displayed great fortitude and strength, with a fighting spirit which proved to be inspirational to all.

Ned also proved to be an inspiration to many through his work with the Heart to Hand chairty and prior to that, the Hands charity.

He began his efforts in 2004 when he travelled to the ravaged orphanages of Romania to help with building works and to try and make life somehwat more pleasant for the children living there.

His charity work then changed to Heart to Hand and again Ned was a vital member of the working crew, travelling to Albania for many years, building churches, houses, community centres and schools. All of this work was done out of his own pocket and from the depths of his heart. Ned could see the benefit of the endeavour with each visit and not only did he travel himself with the group of volunteers, he also recruited many others to make the same journey, including his sons Declan and David who delighted in seeing the work their father had been involved in for so long.

How fitting it was to see a Heart to Hand vehicle parked up outside Holycross Abbey for his Requiem Mass - Ned would have loved that touch.

His work also saw him collect food parcels during Lent from Holycross Abbey and these parecels were distributed to the needy - many people benefitted from Ned's kindness, his generosity of spirit and his sense of humanity, without even knowing Ned Bourke - perhaps that is the true essence of charity where the work is done with great heart and without seeking acclaim, acknowledgement or compensation.

Ned, who delighted in his family, readily admitted that he was most fortunate to have had Nora as his wife. Together they lavished the very best they could give on their children and when the grandchildren came along, they were besotted with them, delighting in their company, their chat, their games and their music - that his grand daughter Miah played violin in Holycross Abbey for Ned's funeral would have totally thrilled him and made him so proud.

Indeed, the Bourke family in their totality, led by Nora, did Ned proud with the manner in which they conducted his funeral in straitened times in conjunction with his friend, Rev Fr Celsus Tierney, with whom he had journeyed on many of those trips to Albania.

As the sun shone down on a lovely May afternoon, Ned was laid to rest in his native parish. May this kind and gentle son of Holycross Ballycahill sleep peacefully.