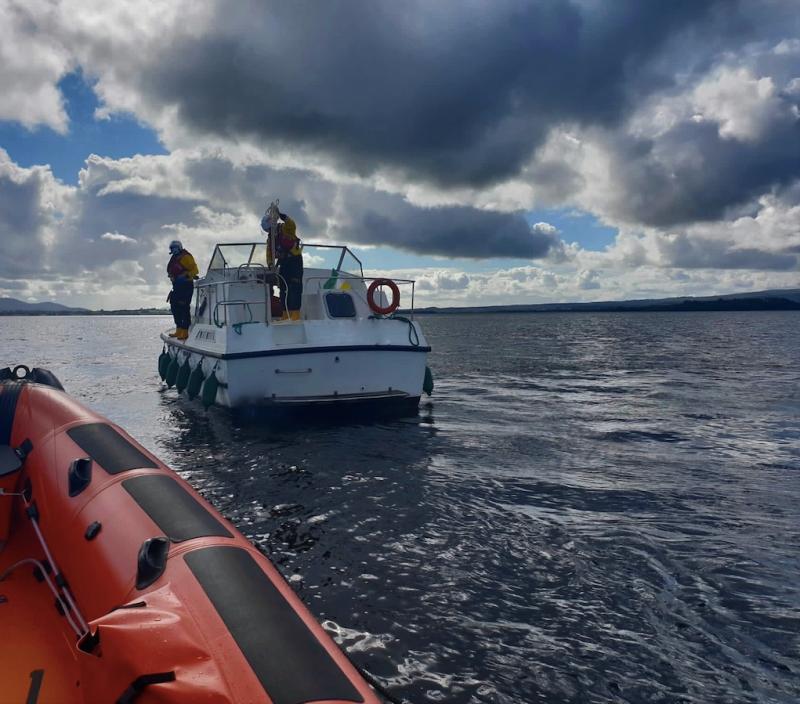 At 1.35pm the lifeboat Jean Spier launched with helm Owen Cavanagh, crew Steve Smyth, Tom Hayes and Michael O’Sullivan on board. The lake had a moderate chop with south-westerly winds, Force 3-4, variable. Visibility was good with frequent squalls

At 2.08pm the lifeboat had the casualty vessel in sight; it was aground on a shoal near Navigation Mark G on the Tipperary shore.

Marine engineers from the cruise hire company arrived on scene at the same time. The lifeboat remained on standby until the engineers had the cruiser off the shoal and the scene was safe.

At 2.30pm, the lifeboat departed to assist the three people on the second vessel aground.

At 2.45pm the lifeboat arrived on scene. The 30ft vessel was aground off the Goat Road, a raised shoal for migrating birds.

The lifeboat found all three people to be safe and unharmed and wearing their lifejackets.

The lifeboat transferred two RNLI volunteers across to the casualty vessel, who reported back that the vessel was not holed.

Given the weather conditions, the RNLI helm decided that the safest course of action was to take the cruiser off the rocks and out into safe water.

At 2.52pm the lifeboat had the cruiser off the shoal and out into safe water, where the drives and rudder were found to be in good working order.

The RNLI volunteers transferred back to the lifeboat and the cruiser continued its passage under its own power.

Christine O’Malley, lifeboat operations manager at Lough Derg RNLI, advises water users unfamiliar with Lough Derg to "plan your passage and keep a lookout for the next navigation mark on your route. Plan your course to arrive at safe harbour before nightfall."