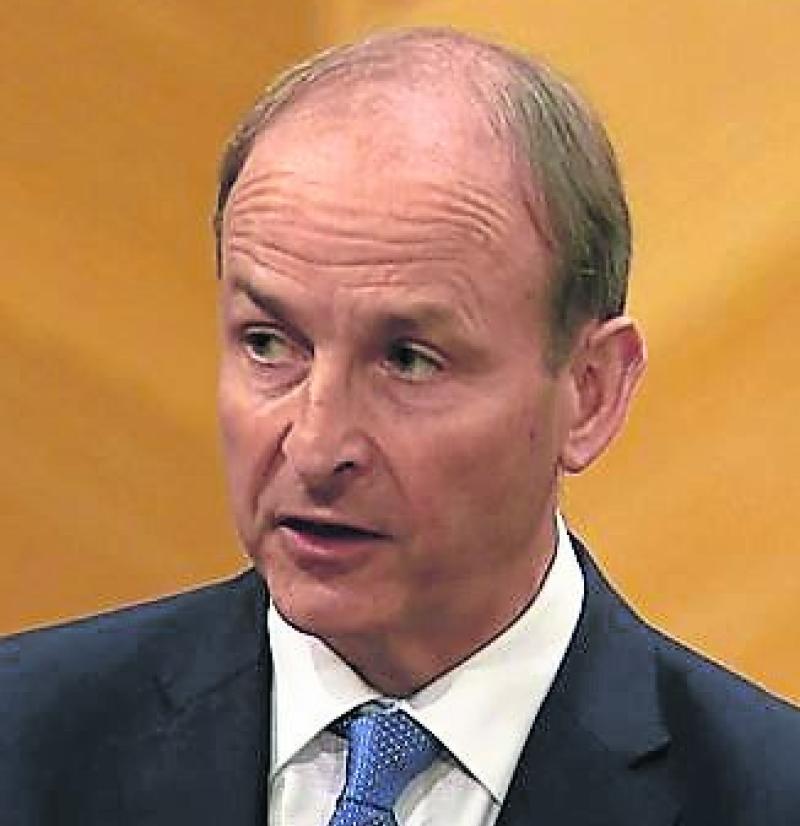 Four days later his mortal remains were interred in his family’s plot in Kilfeacle cemetery. The graveside oration on that occasion was delivered by one of his closest comrades in arms, Commandant Con Moloney of the Fourth Battalion, Third Tipperary Brigade. Treacy’s was the largest funeral ever seen in Tipperary. By the time the first mourners reached the cemetery the rearmost hadn’t yet left Sologhead church.

A year later Treacy’s good friend, Brigadier General Dinny Lacey, OC Third Tipp Brigade IRA, gathered all eight Battalions of the Brigade, some 3,650 Officers and Volunteers, in Kilfeacle in his memory to honour him. That was the first Kilfeacle Commemoration. It was organised by “The Toughest” in memory of “The Greatest”. That commemoration was considered to have been the first and founding action of the current Commemoration Committee.

For the next forty years or so former comrades-in-arms gathered in Kilfeacle annually to honour Treacy.
But, as might be expected, time and the grim reaper took their toll of the survivors. So, in the late nineteen fifties, prior to the golden jubilee of the Easter Rising in 1966 the living Brigade members brought their sons, daughters, nieces and nephews on board to continue their tradition.
The first commemoration organised by them was held in 1960. Later they were joined by other patriotic minded people who had similar ideals and philosophy. In 2020 the Committee held the one hundredth ceremony in Kilfeacle. The tradition lives.

Those Volunteers who remained loyal to their Volunteer oath to the Republic were defeated militarily in the War to Defend the Republic phase of the War of Independence. Following the dumping of arms in May 1923 they endured a decade of discrimination by the Irish Free State Government. Many potential employers refused to employ them and they were excluded from the civil and public service. So their former comrades-in-arms formed “Old IRA Comrades Associations” in some localities and organised practical relief and moral support for

Following of the 1934 Military Service Pensions Act, all those Volunteers who had remained loyal to the Republic and rejected the despised Anglo Irish Treaty were enabled to apply for pensions arising from active military service during the period April 1916 to May 1923. Tens of thousands of former members of the Irish Volunteers, Cumann na mBan, and Na Fianna Éireann applied for pensions. So too did many parents and siblings of Volunteers who had been killed during the wars to Establish and Defend the Republic. Senior members of what eventually came to be named the Commemoration Committee regularly helped to record the names, ranks, and units of all those who had served at Company, Battalion, or Brigade level.

All centenaries have been marked in a fitting but modest way while strictly observing the HSE guidelines for health and safety during the Covid-19 pandemic. An “In memoriam” notice was inserted in the local press to mark the centenaries of the deaths of those Volunteers whose names are inscribed on the Brigade’s Roll of Honour.

The first six months of 2021 were equally problematic. But centenaries were marked in simple but dignified ways. Fortunately restrictions were eased sufficiently to allow the celebration of the centenary of The Truce, 11 July 1921. The ceremony was held at the great Soloheadbeg Ambush Memorial at Sologhead, Monard.

Over the years the Committee has erected and continues to maintain almost seventy Republican plots, monuments, headstones, plaques and markers, not only throughout South Tipperary, but also in North Tipp, Cork, Limerick, Kildare, and Dublin.

It researched and compiled the Roll of Honour listing all those Brigade members who had died in the Wars to Establish and Defend the Republic. It has produced a 2016 calendar and a four CD pack containing the videoed memories of Volunteers entitled, “Where Tipperary Leads”.

To celebrate the Committee’s centenary a number of events have been organised for the weekend of October 15 – 17.

On Friday, October 15, there will be a concert in Halla na Féile, Cashel featuring Rebel Hearts. Doors will open at 8.00 pm, admission €20

On Saturday, October 16 , a power point show featuring images and commentary on the Commemoration Committee’s monuments, will be held in Golden GAA Hall. Doors will open at 8pm, admission free.

On Sunday, October 17 the annual Mass for deceased Brigade members and their families will be celebrated in Kilfeacle chapel, at 2.00 pm. That will be followed by the 101st Seán Treacy commemoration in the local graveyard. This year the oration will be delivered by An Taoiseach, Mícheál Martin TD.