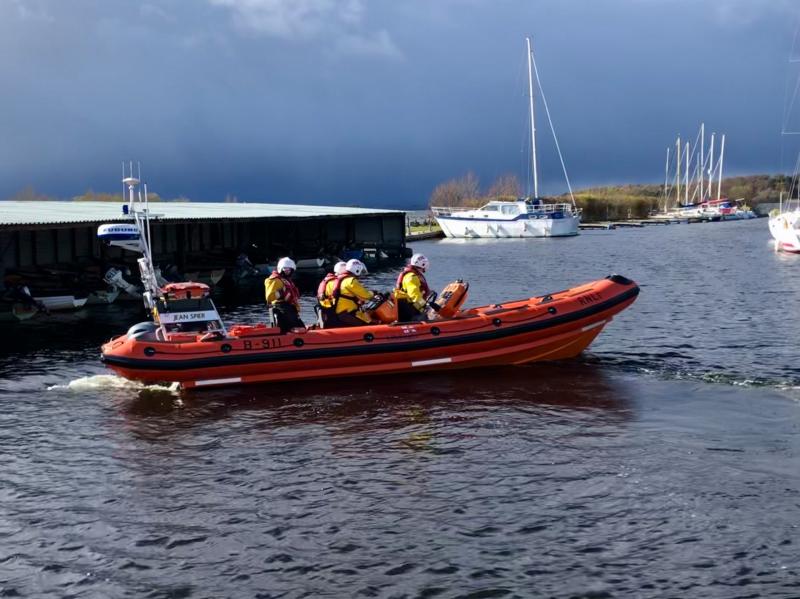 The operation began after Valentia Coast Guard requested Lough Derg RNLI lifeboat to launch to assist people on a 48ft cruiser at anchor just off red marker 1168 which identifies the Benjamin Rocks on the County Clare shore.

The lake was very rough with southwesterly winds Force 6 with severe gusts. As it was night, visibility was aided by searchlights, RADAR and other lifeboat electronic aids.

At 11.24pm the lifeboat had the casualty vessel in sight; it was at anchor inside the Benjamins on the Clare shore.

The lifeboat found all five people to be safe and unharmed and wearing their lifejackets.

The skipper told the RNLI volunteers that the strong winds kept them from making headway, and so at 5.30pm with strengthening winds and failing light, they felt they wouldn’t make harbour and decided to drop anchor and wait out the storm.

However, the cruiser’s location was subjected to the full force of the wind which caused the anchor to drag, taking the vessel close to the rocky shoal.

The lifeboat transferred an RNLI volunteer on to the casualty vessel.

With effort the RNLI volunteer weighed anchor and the lifeboat guided the casualty vessel to the shelter and calm of the public harbour at Dromineer.

At 12:54am the cruiser was safely secured alongside at Dromineer Harbour.

Liam Maloney, lifeboat operations manager at Lough Derg RNLI, advises water users unfamiliar with Lough Derg to "check the weather for the lakes and plan your course to arrive at safe harbour before nightfall".