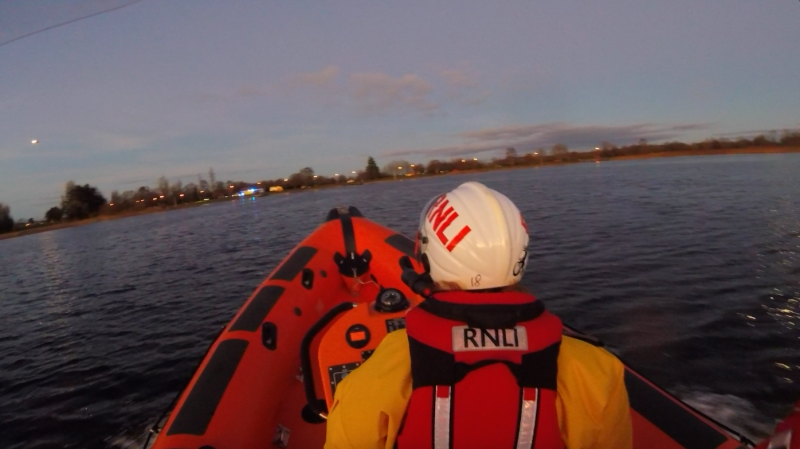 A woman who was out paddle boarding on Lough Derg clung to a marker on the lake for 90 minutes before she was plucked from the water.

The woman told rescue services that she had slipped from her board and had been unable to get back on it.

It took her 9 minutes to be able to get her phone and call the emergency services.

She recognised where she was on the lake from onshore landmarks.

On Wednesday afternoon, 15 December, Valentia Coast Guard requested Lough Derg RNLI lifeboat to launch to assist a person who reported themselves in difficulty in the water near Portumna, at the northern end of Lough Derg.

As crew and shore crew prepared for immediate launch, they were informed that the person in the water was clinging to a navigation mark in the lake southwest of Portumna.

At 4.22pm the lifeboat launched with helm Eleanor Hooker, crew Steve Smyth, Joe O’Donoghue and Doireann Kennedy on board. The lake was near calm with southerly winds Force 1-2. Visibility was good en route to the casualty’s location.

Given the serious risk to life, Rescue 115, the Irish Coast Guard Search and Rescue Helicopter team launched from their base at Shannon. Portumna Gardaí, Portumna Fire and Rescue Crews and Galway ambulance crews made their way to a small harbour on the Galway shore known as New Quay.

As the lifeboat approached the scene, they were informed by Valentia Coast Guard that the Portumna Fire and Rescue crews, who had launched their dory, had located the casualty clinging to a navigation mark towards the western shore of the lake. The woman was taken ashore where an ambulance and crew were waiting to assist.

She had been paddle-boarding and, after coming off her board, was unable to get back on. She said she was in the water for an hour and a half before she was eventually able to use her mobile phone to call the emergency services. She was located after being able to identify landmarks visible on shore.

At 5pm the lifeboat departed the scene and was back at station at 5.40pm.

Catherine Gleeson, Deputy Launching Authority at Lough Derg RNLI said she was "glad of the positive outcome and that the person in the water had a means of calling for help’. She advises water users if they are going afloat, to go with a friend and if you are going out alone, always tell someone where you're going and when you'll be back’"