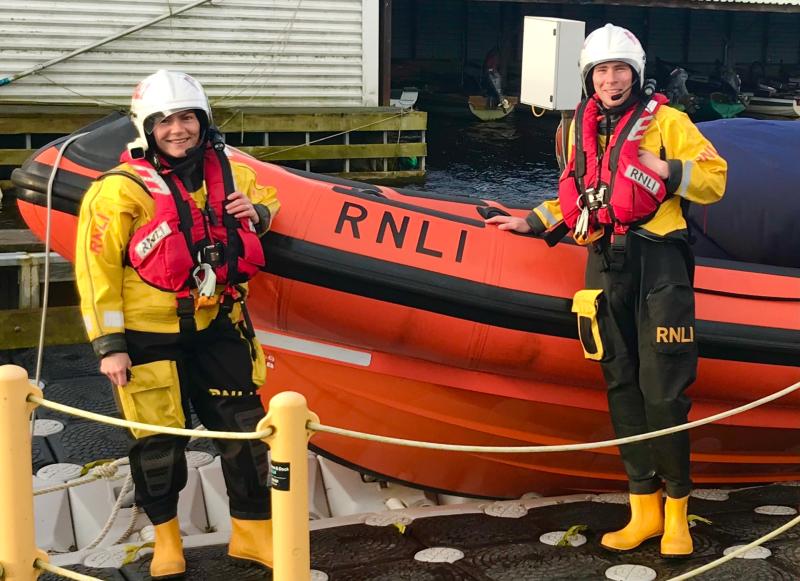 As you prepare to tuck into the turkey and ham this Christmas, spare a thought for the selfless volunteers at Lough Derg RNLI who will be on duty and ready to leave their families to save lives it necessary

Among five new volunteer crew members on call for their first time this year at teh RNLI station in Dromineer will be a busy mother of one.

As the charity launches its Christmas appeal, Ania Skrzypczynska, a native of Poland, is preparing to swap traditional festivities for the cold waters of the December lake, should the call for help come in. She is urging the public to help her crew and the thousands of other volunteer crews on call over the Christmas period, to continue their lifesaving work.

“I joined the RNLI because I wanted to become part of the community after moving to Dromineer,” Ania explains.

She said that after the first few training sessions on the lifeboat, she had got to meet really nice, friendly people and found it to be a great experience. Then after passing her first assessment and being allowed to go on the lifeboat, it was like the beginning of an adventure for her.

“Being a mother of a small and very busy boy, I am restricted with the amount of time I have to spare between my full-time job and family life.
Ania said that she was looking forward to becoming a fully qualified crew member.

“I like new challenges and I want to channel it towards learning how to help others. And by living so close to Lough Derg, I want to learn more about the lake, it’s beauty and, it’s dangers,” said Ania.

Among the other new crew members at Lough Derg RNLI, are Richard Nolan, Ciara Lynch, Eimear Kelly and Ciara Moylan.

For Richard, his knowledge from a young age of the work the RNLI did on the lake was a major influence in his decision to join the crew, but he also found that having lived away from home in London for almost 10 years, it was a good opportunity to re-integrate into his community.

“With living on the lake, I knew the RNLI would not only give me a network of people, but the skills and knowledge you need regarding safety on the water. I have really enjoyed how volunteering with the RNLI has engaged me and been a beneficial use of my spare time,” he said.

Like Ania and Richard, each RNLI crew member signs up to save every one from drowning - it has been the charity’s mission since 1824.

This Christmas many will leave their loved ones behind to answer the call, each time hoping to reunite another family, and see those in trouble on the water safely returned.

“This is my first Christmas on call, and I know even over the festive period, our lifesavers are ready to drop everything at a moment’s notice and rush to the aid of someone in trouble on the water. At this time of year, the weather can be at its worst and lives can be on the line.

“We know that every time our crews go out, they hope for a good outcome, but sadly this sometimes isn’t the case. We hope that this year’s Christmas appeal will show people just how tough it can be, but also that with their help we can get so much closer to our goal of saving every one,” said Richard.

The RNLI depends on donations from the public. To make a donation to the its Christmas Appeal visit: RNLI.org/Xmas