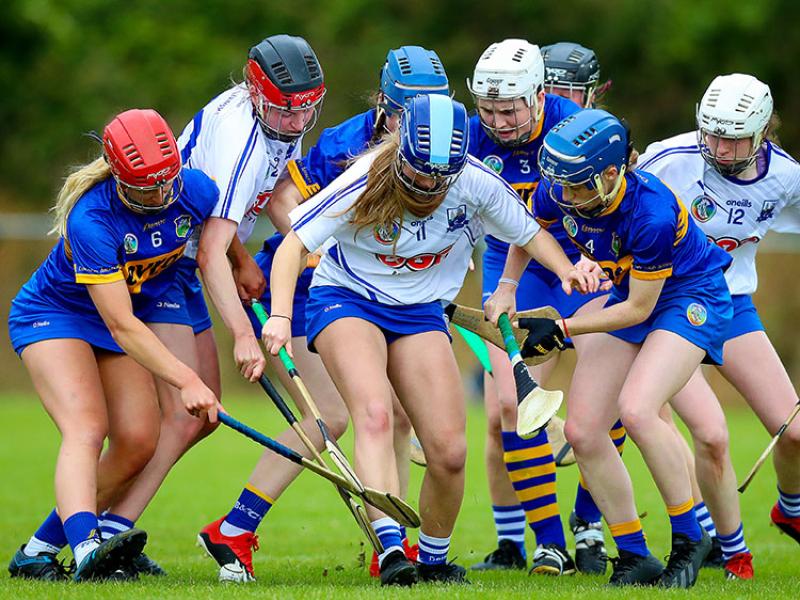 It was a very one-sided affair in Drom-Inch GAA on Saturday last as Drom-Inch blitzed an under strength and very young Nenagh Eire Og outfit to march into the league final.

The county champions dominated from the offset with Mary Bourke excellent in attack and together with Anne Eviston and Antoinette Kennedy the points started to fire over.

Two first half goals from Mary Bourke and Anne Eviston increased Drom-Inch’s lead with the Nenagh defence having no answer to the onslaught.

A brilliantly taken point from Eabha O’Brien was the highlight of the half for Nenagh who trailed the home side 2-16 to 0-1 at the break.

Credit to the young Nenagh side they fought until the final whistle despite the Drom-Inch’s dominance. Their hard work paid off with a goal from Ciara Morris in the second half.

They were unlucky not to have a second goal but Drom-Inch keeper Ciara Dempsey was on hand to save a Nenagh penalty. Drom-Inch will now go on to meet Eire Og Annacarty in the league final.

In a keenly contested opening half Annacarty led Silvermines 6 points to 4 at half time on Saturday in the Senior League semi-final.

The Silvermines scores came from Eimear Murphy, Sarah Madden and Rebecca Forde. Both sides exchanged further points at the start of the second half before a Joanne O’Brien goal in the 40th minute put Silvermines into the lead 1-07 to 9 points.

The goal seemed to spring Annacarty into life and they responded brilliantly with 4 unanswered points to swing the lead back in their favour 13 points to 1-7.

In the final quarter Silvermines struggled to break down the Annacarty defence and could only muster a further point before the end of the games.

Both sides produced a very tough physical game of camogie but Annacarty’s greater scoring threat and ability up front ensured they ran out 5 point winners.

Leah Heffernan produced a brilliant second half performance at full forward with some lovely taken points off both her left and right.

For Silvermines Aisling Carey was excellent in goals denying Annacarty a green flag on a number of occasions. Maria Moroney and Sarah Madden were also very good.

For Annacarty Orla O’Brien was excellent in midfield while Ciannait Walsh and Orla Walsh were also standout performers while Siobhan O’Neill was excellent on the frees.

Played in Kilcommon, Kilruane started the better and led0-2 TO 0-1 after five minutes of play.
Boherlahan however were to score the next three points with Emma Horgan accurate from frees. Clodagh Horgan finished a great passing movement to put Boherlahan 1-5 to 0-3 clear after 20 minutes and maintained this five point lead at halftime , leading 1-6 to 0-4.

An Amy Quinlisk free to the net followed by a Lisa Cahill point put just two points in it after 40 minutes but another Boherlahan goal two minutes later by Leah Baskin gave Boherlahan the cushion they were not to relinquish.

Shauna Heffernan and Lisa Cahill were very busy for Kilruane with Sarah Delaney winning a lot of 50/50 balls for Boherlahan in the centre forward area.

Lauren Horgan made an important late save as Kilruane pressed late on. Ali O’ Kelly narrowed the gap with a point. Boherlahan passing out of defence and up front when running at Kilruane was very effective.

Newport Ballinahinch will play Boherlahan Dualla in the Intermediate league final after an 8 point victory over Toomevara. Amazingly both sides raised five green flags each. Toomevara goals came from Mary Flaherty and two each from Katie Ryan and Laoise Cummins.

Spectators were treated to a cracker of a game with extra time needed before a winner could be declared in this Junior A League final. Kiladangan’s Maria Minehan opened the scoring with a point from play, moments later Elaine Brennan levelled the score with a point for Holycross Ballycahill.

Kiladangan’s Emma Mulqueen and Eva Seymour added two more points to the scoreline, however Holycross Ballycahill’s Linda Fanning added four more points, as the game ebbed and flowed back and forth. Kiladanagan dominated the last minutes of the half with a point each from Emman Cahalan and Emman Mulqueen before Meabh Ni Riain blasted a goal into the back of the Holycross Ballycahill net.

One last point from Emma Gavin added to the Kiladangan tally resulting in a half time score of Holycross Ballycahill 0-5, Kiladangan 1-6.

The start of the second half saw Holycross Ballycahill make a blistering start. A brilliant passage of play between Julie Brennan, Sara Gleeson and Linda Fanning, saw Linda bury the ball into the back of the net.

Kiladangan finally got on the scoreboard for the second half with a point from Paula Kelly.A point from Kiladangan’s Emma Mulqueen and Paula Kelly had both teams level at 1-9 a piece at full time.

Extra time was a titanic battle, however Kiladangan got off to the best possible start with a goal from Maria Minehan, followed by a point from Holycross Ballycahill’s Linda Fanning.

Another two points from Kiladangan and one from Holycross Ballycahill, saw Kiladangan come out victorious.