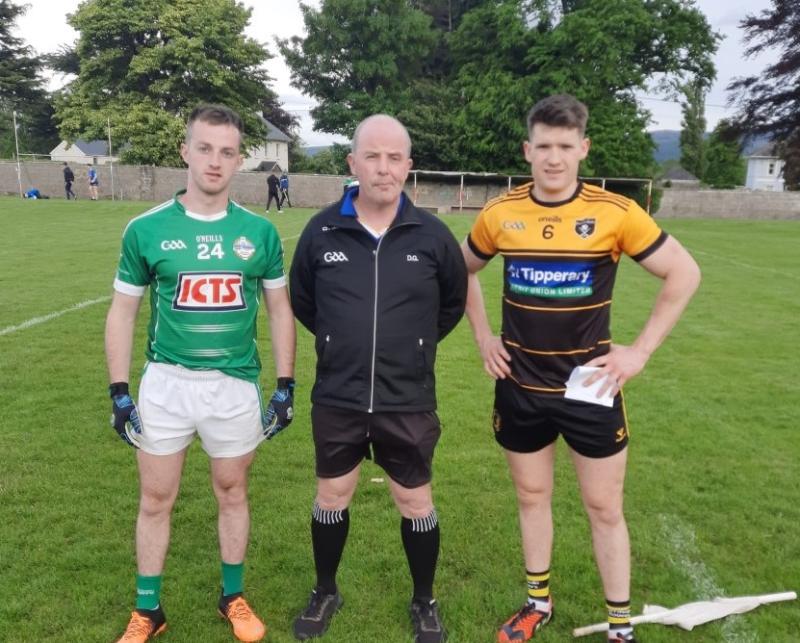 Arravale Rovers are through to the Michael Devlin Solicitors O’Donoghue Cup Final following their one point victory over Golden/Kilfeacle at Bansha on Tuesday evening. Their strength off the bench was a telling factor in this game, as their half time substitutions contributed hugely to the outcome.

Golden/Kilfeacle, with Ben Currivan in particular, largely dictated the first half proceedings. They found scores easier to come by and Eoin Ryan’s goal on ten minutes came as a result of a move starting out of defence by Shane Stapleton, through Seanie O’Halloran and Killian Hayde. They led at the break by four points, 1-8 to 0-7 and were good value for same.

Rovers introduced four half time substitutes and this had a telling effect on the result. Micheal Lowry goaled after three minutes, Eoin Doocey edged them in front after fourteen minutes, while Donagh Leahy’s second on thirty minutes proved to be the match winner.

Paddy Dalton got the scoreboard ticking over inside the opening minute, with a point at the near end. Cian Ryan made it 0-2 to 0-0 before Ben Currivan got his first of the evening. Points from David Kelly from a placed ball and one from play from Johnny Lowry opened up a three-point lead for the town team by the eight minute. Golden got more into the game and played their best football during the next twenty minutes.

Ben Currivan got his second before Eoin Ryan crashed home a goal following a four man move up field. David Wade and Seanie O’Halloran kicked two on the trot before Oisin Hogan stemmed the flow with a good score. Golden hit four unanswered points in a five-minute spell to go six up with eight minutes remaining in the half. Arravale finished the half the stronger and points from David Kelly and Cian Ryan left four between the sides at the break.

Arravale re jigged their attack, with the introduction of fresh legs at the break. This immediately paid dividends as a goal from Micheal Lowry and a point from David Kelly had the sides level, five minutes after the restart. Both teams went on the defensive and scores were hard to come by. Points from Eoin Doocey and Donagh Leahy eased Arravale to the front but a Jack Currivan long range free pulled one back for Golden. Seanie O’Halloaen tied the game with five minutes remaining.

With the game looking likely to go to extra time, Arravale attacked down the stand side and Donagh Leahy put over at the far end with time almost up. Golden attacked down the centre and a long-range effort from a placed ball in injury time dropped short as Rovers held out by the minimum for a place in next week’s final. Final score , Arravale Rovers 1-11, Golden/Kilfeacle 1-10.

BREAKING: Five Tipperary projects have been approved under the HSE Capital Plan 2022